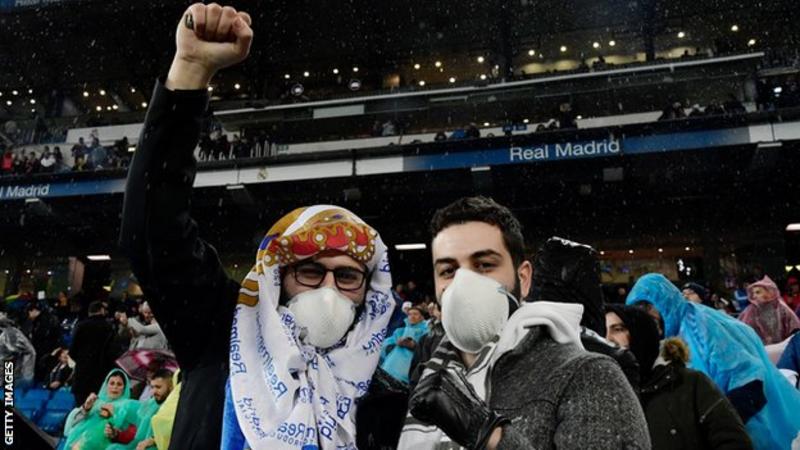 Football authorities have held talks with the UK government and public health experts over contingency plans to play matches behind closed doors if the coronavirus outbreak escalates.

One senior football source said such a measure was “a possibility, but weeks rather than days away” and added “for now it is business as usual.”

Uefa president Aleksander Ceferin has said there is no need to panic.

“Let’s try to be optimistic,” he said. “Let’s not think about dark scenarios.”

The Football Association and English Football League met the government at short notice at Wembley on Sunday. On Monday, the FA, EFL and Premier League held talks with staff from the country’s chief medical officer.

The Health Secretary Matt Hancock said the government was not currently recommending the cancelling of large events unless this was advised by Public Health England. But he has warned there was a “significant risk” of the virus becoming more widespread, meaning further measures might become necessary.

The coronavirus, which originated in China, has spread to more than 60 countries and claimed more than 3,000 lives. There have been 39 cases in the UK so far.

The coronavirus outbreak has already impacted on football matches across Europe, with several games in Italy postponed or played behind closed doors after a number towns in the north of the country were put into lockdown.

In Switzerland, the Swiss Football League is suspended until 23 March after the government banned events expected to draw 1,000 people or more for two weeks.

Speaking at Uefa’s annual congress in Amsterdam, Swiss football federation president Dominique Blanc said the outbreak could have serious consequences for the sport.

“Due to the coronavirus we are in a situation that could shake, for a part of us, professional football to its foundations,” he said.

With Euro 2020 qualifying play-offs scheduled to take place later this month, as well as knockout rounds in the Champions League and Europa League, Uefa could face a major scheduling issue if the coronavirus outbreak forces more matches to be postponed.

Uefa general secretary Theodore Theodoridis said a working group had been set up with the European Leagues association to deal with any fixture congestion.

“We met with the European Leagues yesterday to create a coordination group to face the situation and find the best possible solutions,” he said.

“From our side we are addressing the situation by making contact with the World Health Organisation and different governments. We don’t want to overreact but have a line of contact.

“The calendar is congested and it is difficult to find space, working together is where we will find solutions.”

Theodoridis said Uefa had also discussed the possible impact the outbreak may have on this summer’s European Championships, which is due to take place across 12 European cities in June, but that this month’s matches were their immediate priority.

“We have been working on different scenarios,” he added. “The Euros start in June. We have matches coming in the next weeks.

“We don’t want to share further details. The more urgent matters are coming in the next two weeks. But there are plans for everything,”

Ceferin said they had not set a deadline to make a decision about Euro 2020.

“You don’t know how many concerns we have – security, political instability, virus – we are dealing with it and we are confident we can deal with it,” he added.

A number of other sporting events have already been cancelled as authorities attempt to control the outbreak, including the Six Nations match between Ireland and Italy this weekend and next month’s Chinese Grand Prix in Shanghai.

No selfies at Wolves

Meanwhile, Wolves players have been told not to pose for selfies or sign autographs because of the coronavirus outbreak.

“Wolves players and staff have been asked to avoid any unnecessary meetings, lunches or other public engagements, and temporarily avoid casual fan interaction such as selfies or autographs,” said a club statement.

“Whilst we acknowledge that this will be disappointing for some supporters, we stress that this a temporary measure to protect the ongoing well-being of the Wolves squad and is a decision which has not been taken lightly.

“In addition, Wolves players and staff are also being instructed to avoid shaking hands where a warm smile and personal greeting will suffice.”