Early human ancestors may have boiled their food in hot springs 1.8 million years ago — long before they learnt to use fire as a controlled source for cooking, study suggests

Hot springs may have been used by early human ancestors to boil food around 1.8 million years ago — long before they mastered cooking with fire, a study suggested.

The Olduvai Gorge in northern Tanzania has produced some of the oldest remains of early human ancestors known to date, along with some of the tools they used.

Researchers from Spain and the US have now found evidence that the rift valley also contained a number of hot springs near the sites of the early hominids.

This proximity, the team reported, raises the possibility that our distant relatives took advantage of the springs to boil kills like wildebeest, as well as roots and tubers.

Hot springs may have been used by early human ancestors to boil food (as depicted) around 1.8 million years ago — long before they mastered cooking with fire, a study suggested

‘As far as we can tell, this is the first time researchers have put forth concrete evidence for the possibility that people were using hydrothermal environments as a resource,’ said paper author and geobiologist Roger Summons of MIT.

In these settings, he added, ‘animals would’ve been gathering and […] the potential to cook was available.’

The researchers had originally set out to understand why a sandy layer of 1.7 million-year-old rock found as a 1.9 mile (3 kilometre) outcrop in the Olduvai Gorge was so strikingly different from the 1.8 million year old layer of dark clay it overlay.

‘Something was changing in the environment, so we wanted to understand what happened and how that impacted humans,’ said paper author and archaeologist Ainara Sistiaga also of MIT.

She collected rock samples from the gorge, which she analysed for the presence of certain lipids — a type of large organic molecule — that can provide signs of the kind of vegetation that would have grown in the region at the time.

It is thought that — around 1.7 million years ago — East Africa gradually dried up and, as a result, transitioned from a wet, tree-population environment to drier grasslands.

‘You can reconstruct something about the plants that were there by the carbon numbers and the isotopes, and that’s what our lab specialises in, and why Ainara was doing it in our lab,’ Professor Summons said.

‘But then she discovered other classes of compounds that were totally unexpected.’

The lipids, the team realised, had not been produced by plants, but by bacteria — and in fact were identical to the lipids released by microorganisms in the hot springs within the Yellowstone National Park, in the United States.

‘Some of the samples Ainara brought back from this sandy layer in Olduvai Gorge had these same assemblages of bacterial lipids that we think are unambiguously indicative of high-temperature water,’ Professor Summons explained.

One such bacterium, he said, is called ‘Thermocrinis ruber’ — and it typically lives in the outflow channels of hot springs.

‘They won’t even grow unless the temperature is above 80 degrees Celsius [176 degrees Fahrenheit],’ he added — suggesting that hot springs were likely present in the Olduvai Gorge, which is known to have been a geologically-active region. 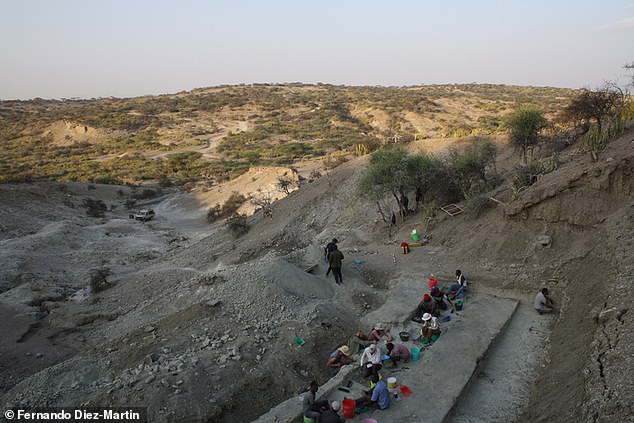 The Olduvai Gorge in northern Tanzania, pictured, has produced some of the oldest remains of early human ancestors known to date, along with some of the tools they used 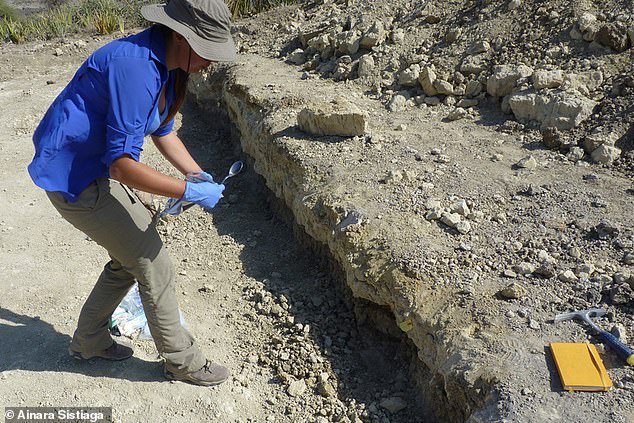 Researchers from Spain and the US have now found evidence that the gorge also contained a number of hot springs near the sites of the early hominids. Pictured, Sistiaga collects samples

Exactly if and how our distant ancestors used hot springs to cook, however, remains a hard question to answer with certainty, although the team think that the early humans could have dipped food in the springs to make them more palatable.

Equally, animals could have accidentally fallen into the boiling hydrothermal waters — allowing humans to later fish them out as a ‘precooked’ meal.

‘If there was a wildebeest that fell into the water and was cooked, why wouldn’t you eat it?’ Dr Sistiaga asked.

‘We can prove in other sites that maybe hot springs were present, but we would still lack evidence of how humans interacted with them.’

‘That’s a question of behaviour, and understanding the behaviour of extinct species almost 2 million years ago is very difficult,’ she added.

‘I hope we can find other evidence that supports at least the presence of this resource in other important sites for human evolution.’

The full findings of the study were published in the journal Proceedings of the National Academy of Sciences.