Grease legend Olivia Newton John turns 72 today. Back in 1977 her star was rising just as Elvis’ was fading, although nobody realised just how close he was to the end. The entire movie draws heavily on the image and stylings of Elvis and when producer Allan Carr originally bought the rights to the 1971 stage musical, he imagined the two leads as being like “Elvis Presley and Ann Margret.” He desperately wanted The King to take part in the film and offered him a juicy role.

Just months before he died, Elvis had confided in close friend and backing singer Kathy Westmoreland how much he wished he had made great film that would stand the test of time.

And yet, he could have been in the greatest and most enduring musical movie of the last five decades. 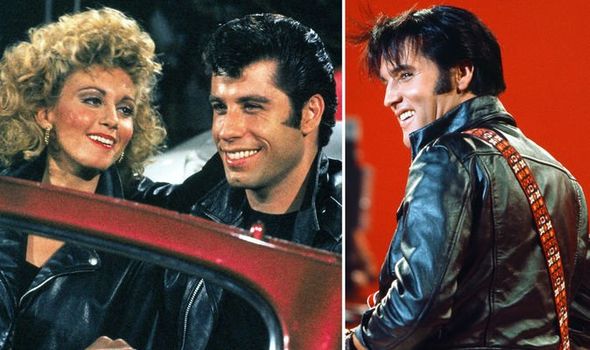 The producers of Grease offered Elvis the scene-stealing cameo as Teen Angel.

The character memorably performs the number Beauty School Drop-Out to Frenchie and her pals in a fantasy sequence.

Fellow 1950s heartthrob Frankie Avalon eventually took the role but it’s easy to imagine Elvis (perhaps a little more in his prime) making the part his own.

Even though Elvis apparently turned down the role, the scene and one other particular moment forever feel indelibly linked to the legend.

Ironically, one of the opening lines of the song could be sung directly to Elvis, not Frenchie: “Your future, so unclear now, what’s left of you career now?’

Elvis died on August 16, 1977. The movie was already well underway filming and on the actual day he passed away at Graceland, the cast of Grease filmed Stockard Channing’s Look At Me, I’m Sandra Dee song.

It contains the immortal line; “Elvis, Elvis, let me be. Keep that pelvis far from me.”

Elvis’ influnece can been seen throughtout Grease, from John Travolta’s strut and sneer to his wardrobe and hair.

The iconic Greas’d Lightning number could have been lifted straight from Elvis’ own blockbusting Jailhouse Rock movie.

Of course, Elvis was wrong about being forgotten. His music has ensured he remains as famous now as he ever was, while some of his 31 movies, however kitchy, are classics of their kind, from Jailhouse Rock to Viva Las Vegas, Blue Hawaii and Charro!