Assistant coach Graham Thorpe says England remain fully focused on preparing as well as they can for the first Test against Sri Lanka despite the coronavirus pandemic.

England are due to play the first of two Tests in Galle next Thursday – games you can watch on Sky Sports Cricket – but the players have been instructed to avoid interacting with fans and limit public appearances to reduce any potential risk of spreading the virus.

Sri Lanka confirmed its first positive case of coronavirus on Wednesday but when asked if the global situation is affecting the players, Thorpe told Sky Sports: “No – and from that point of view, until anyone tells us anything different, we’ll carry on with business as usual and work hard and prepare for the first Test in Galle.

“Naturally you are seeing things but until anyone tells us anything different we’re encouraging the guys to stay full focused on their cricket.”

Such focus was to the fore as England racked up 354-3 on day one of their first-class tour match against a Sri Lanka Board President’s XI in Colombo.

Opener Zak Crawley took centre stage initially by following up scores of 43 and 91 made against an SLC Board XI with his first century in England colours.

“It’s gone well,” he reflected. “Lots of people have spent good time at the crease. Joe Root and Ollie Pope have gone past 50 and it was a wonderful hundred from Zak Crawley as well.

“He’s developing really well as a player who has just been around the England set up for the last three or four months. 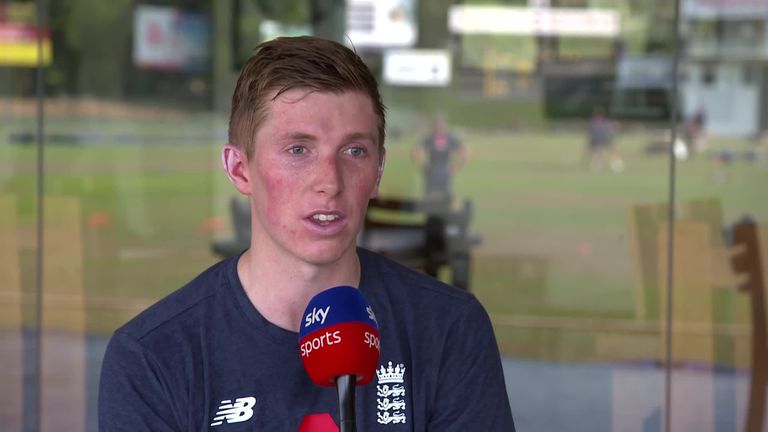 “He’s a good character – really willing to learn and he seems to study the game himself. He’s made some really good progress, so we’re really pleased with him.”

Thorpe is more than familiar with Sri Lankan conditions having played six of his 100 Tests in the country – his record including a match-winning 113no in the third Test of 2001, which spurred England on to a 2-1 series success.

The 50-year-old says that for all the challenges posed by spin on the subcontinent, England must not underestimate the potency of Sri Lanka’s seamers.

“We’ve sat down and had good conversations about it – getting used to the heat, the temperature, the humidity. You have to deal with a lot of sweat quite quickly.

“From a bowling point of view it’s about looking after the ball, trying to keep sweat off the ball so you’ve got good grip.

“It’s similar with batting – your gloves and shirt sweat up quickly. Wristbands, headbands – whatever you need.

“Also the work we’ve done in the nets. I feel like physically the players are getting up to a good place now and technically they’ve worked very hard.

“Obviously Sri Lanka are normally dominated by spin, although you must keep an eye on what to do against the seamers as well.

“Our first three-day game gave us a nice little warning as we lost eight wickets to seamers. But in this game the spinners have bowled quite a lot so far.