A Norwegian woman who has settled in Australia has described how confusing some of the local ‘lingo’ is in a text message sent from her boyfriend.

Synnsa took to TikTok to share a picture of the exchange, which saw her partner try to fit in as many colloquialisms as he could in the space of a paragraph-long sentence.

‘Just gonna head down to the servo later this arvo gonna pick up some choccy milk and a pack of durries, did you want anything from the bottlo cuz I’m not here to f*** spiders am I,’ he had written. 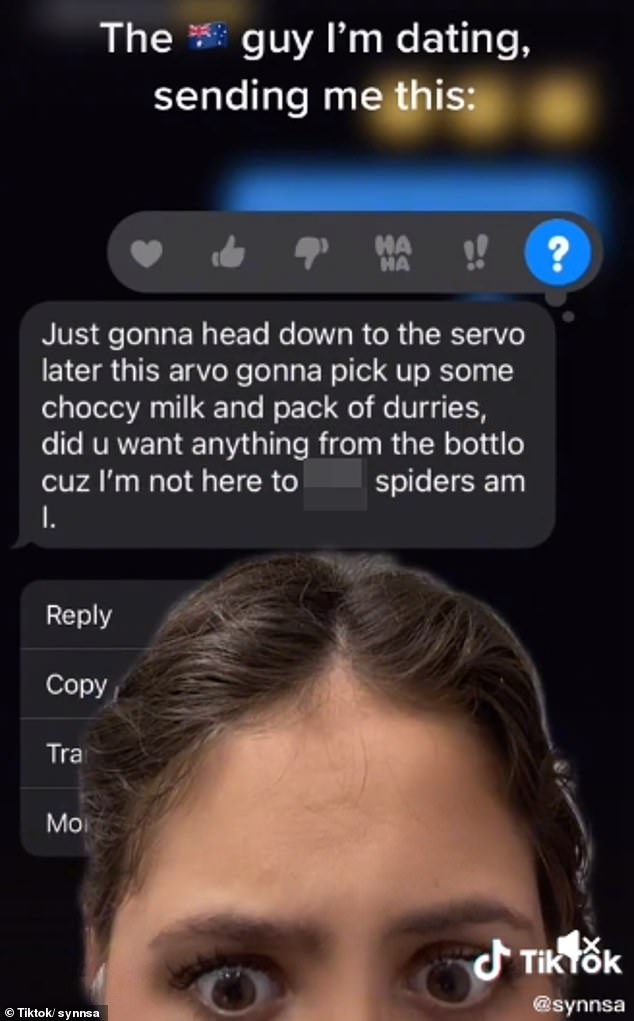 Synnsa took to TikTok to share a picture of the exchange, which saw her partner try to fit in as many colloquialisms as he could in the space of a paragraph-long sentence

Synnsa joked that she had studied English for 12 years and still couldn’t make out what he was trying to say.

‘Literally no Aussie says the f*** spiders thing. Unless they’re from Melbourne,’ one woman responded.

‘Aw man I could really go for some choccy milk right now,’ said another.

One woman translated: ‘I’m just going to the service station (petrol station) later this afternoon to grab a pack of cigarettes. Do you want anything from the liquor store?’

An American expat has previously listed some of the common Australian phrases he’s learned since moving to Australia and what the locals say back in his home state of Georgia.

Adam Foskey was taken aback by the ‘odd’ spellings of some words and phrases, but said he preferred some of them over the American alternative.

‘First up we have the word “kerbside” but spelt with a “k” – I would usually just spell it “curbside” back home,’ he said in a TikTok video.

The next word that befuddled him was ‘whipper snipper’ which is a colloquial term for the gardening tool brush-cutter that is used for clearing overgrown grass, weeds, brambles, and small hedges.

‘In America, I would call that a “weed-eater” but I prefer whipper snipper because it rhymes,’ Adam said.

Adam also did not understand why Australians refer to napkins as ‘serviettes’ – but multiple commenters claimed they distinguished between the two because serviettes are traditionally paper while napkins are fabric.

‘Lastly, we have roquette,’ Adam referred to the green leafy vegetable commonly used in salads. ‘I usually call it “arugula” but I like roquette better because I get tongue-tied even trying to say arugula.’ 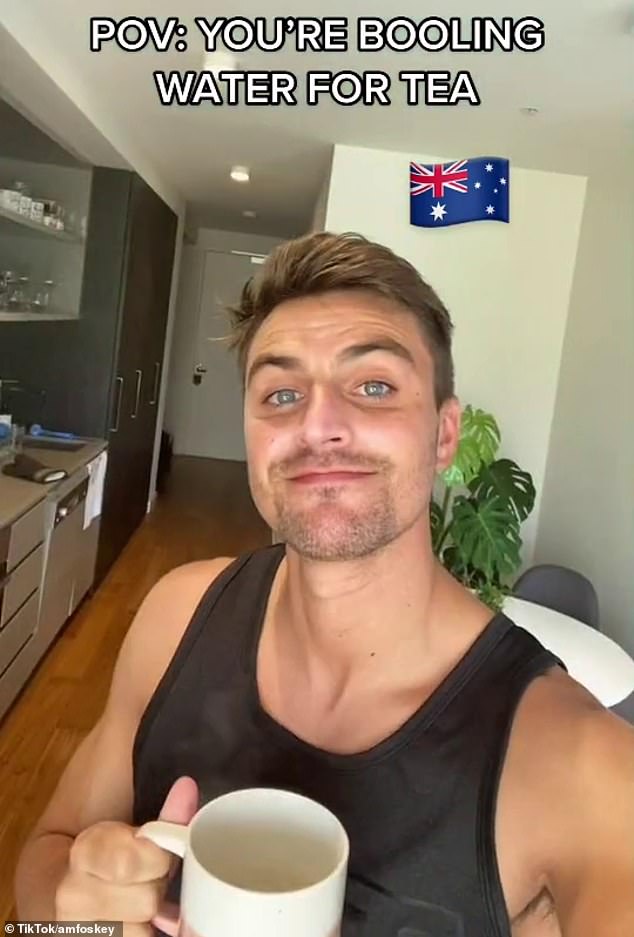 Many Australian commenters were shocked to see some of these phrases termed ‘common.’

‘Kerbside is definitely not a thing here,’ wrote one woman. ‘It’s curbside or gutter.’

‘Did every Aussie just look up roquette and realise there was another spelling?’ asked a man. ‘I’ve only ever known it as rocket!’

‘Love your videos, but it’s rocket … it never sang with Diana Ross.’

But others agreed with some of Adam’s preferences.

‘Whipper snipper has got to be one of the greatest words of all time,’ wrote one man.

Adam also recently caused a stir online after pointing out one major difference between US and Australian kitchens.

He revealed Americans tend to make tea by boiling water on the stove rather than using a kettle.

In a video posted to his popular TikTok page, Adam makes tea as he would in America – by filling a pot with water and bringing it to a boil on the stove – then again as he would in Australia – by simply flicking on the kettle. 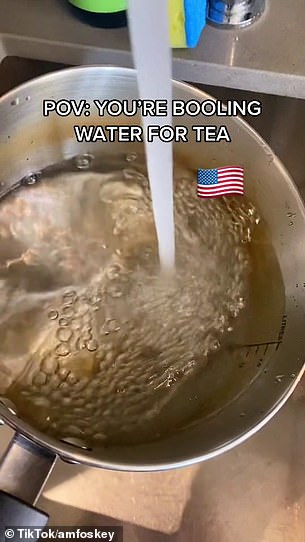 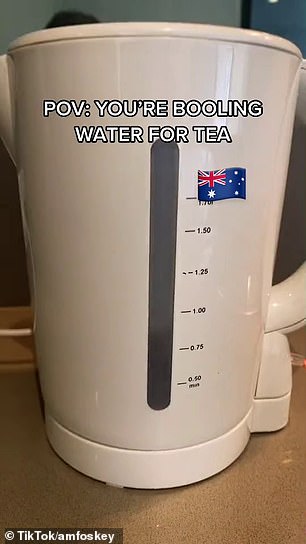 America vs Australia: In a video to TikTok the Georgian man who now lives in Melbourne, showed that Americans make tea by boiling a pot of water on the stove while Australians simply flick on the kettle 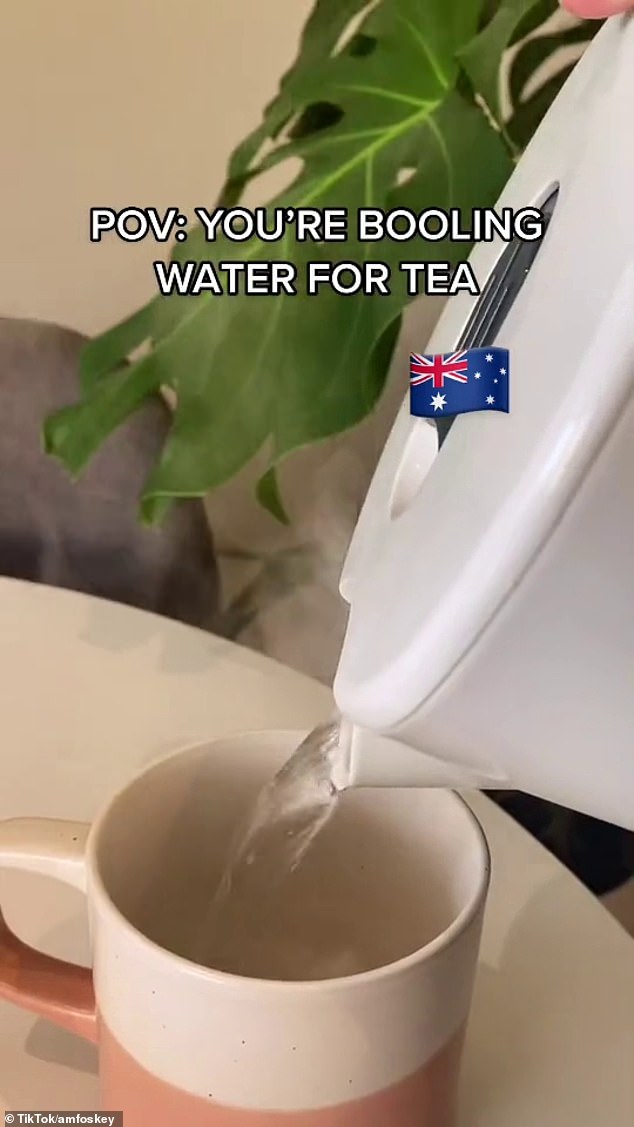 Hundreds of Aussie viewers in the comments were shocked to discover that Americans don’t use the ubiquitous kitchen gadget.

‘What! America doesn’t have kettles!? Did they forget? Or.. what??’ one wrote.

‘I remember struggling to make a tea in the USA using the coffee maker, called downstairs for a kettle I got silence,’ said another.

‘Note to self: Pack the kettle for Disneyland trip,’ a third joked.

Some pointed out that many Americans skip the stove altogether and use the microwave while others tried to explain why kettles were so uncommon.

‘I read a whole thread by Americans this morning about boiling water on the stove vs in the microwave…’ one person said.

‘It’s that the power outlets are low voltage in US so kettles don’t really work or would be super slow to heat,’ another user explained.