A South Korean football team has apologised after being accused of populating empty stands with sex dolls.

FC Seoul took on Gwangju FC on Sunday and pictures showed what they later described as ‘premium mannequins’ in face masks scattered across one of the empty stands at their Seoul World Cup Stadium.

Some of the artificial supporters wore t-shirts with the logo of SoloS, a sex toy seller, and after gaining worldwide attention, the club looked to set the record straight. 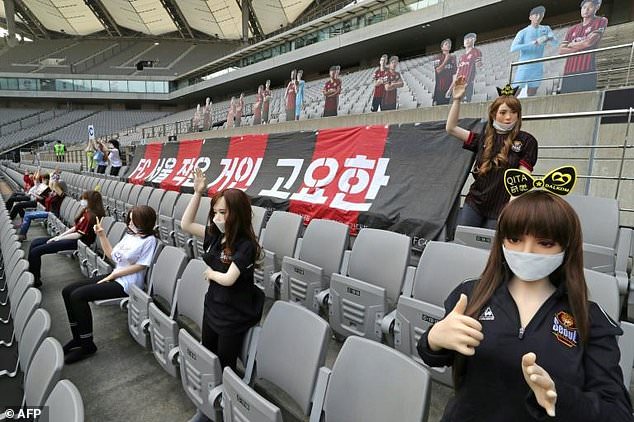 They insisted the mannequins – used in the absence of fans, who are banned from attending because of the coronavirus pandemic – had ‘no connection to sex toys’.

FC Seoul said the company which provided the mannequins for Sunday’s game had previously made them available to SoloS, hence the advertising in which they were clad.

‘We are sincerely sorry for causing deep concern to fans,’ FC Seoul said in a statement, following uproar from fans and media. 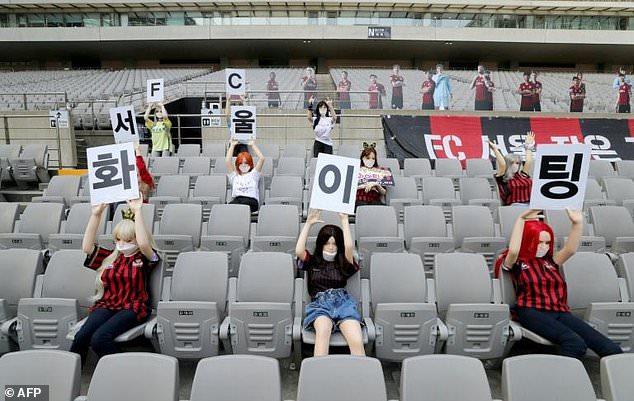 ‘We have confirmed from the very beginning that they had no connection to sex toys.

‘Our intention from the start was to provide even a small entertainment after it was decided that the games would be hosted behind closed doors due to coronavirus.

‘Regardless of that, we would like to apologise once again to everyone who loves and supports FC Seoul. We will be holding further discussions on how we can review potential problems in similar matters. We will put forth our due diligence to prevent such issues in the future.’

The mannequins, most of them female, but some were male, wore facemasks and were separated according to social distancing guidelines.

They were seen holding placards advertising the company and some of its models. 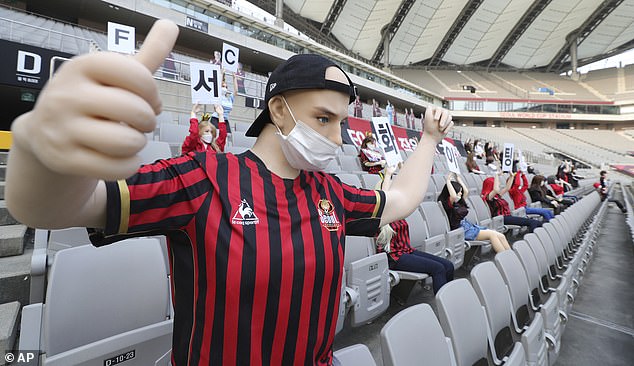 Seoul official Lee Ji-hoon added to the BBC that they did not do a background check on Dalcom, and didn’t realise their line of work.

The K-league’s new season kicked off on May 8 after being postponed for more than two months over the coronavirus pandemic, but fans remain barred.

Instead, clubs have used cardboard cutouts, placards and banners to fill up the stands.

Related posts:
May 18, 2020 Lifestyle Comments Off on FC Seoul apologise over 'sex doll' controversy at last match
Celebrity News:
Screaming Because Blake Shelton and Gwen Stefani Are Officially Engaged
The truth about Gigi Hadid and Zayn Malik’s relationship
DJ Tony Wyn-Jones dead: Former Radio One DJ dies aged 77 after ‘long illness’
Demi Lovato Announced As Host For People’s Choice Awards 2020!
Dixie D’Amelio & Noah Beck’s 1-Month Anniversary Posts For Each Other Are Revealing
Recent Posts
This website uses cookies to improve your user experience and to provide you with advertisements that are relevant to your interests. By continuing to browse the site you are agreeing to our use of cookies.Ok