Purr-fectly comfortable! Sleepy cats prove they can doze off anywhere as they nap in baskets, tree stumps and in between bamboo POLES

Most pet owners know the pain of splashing out on an expensive cat bed – only to find that their furry friend prefers the comfort of a cheap cardboard box.

And these hilarious new pictures shared online prove that cats really will sleep anywhere, from a bird cage to cushion cases.

In a gallery put together by Bored Panda, cats from around the world can be seen living up to the old adage of ‘if it fits, I sits’.

Here, FEMAIL takes a look at the most inconvenient – but apparently comfortable – places our furry pals have settled down in. 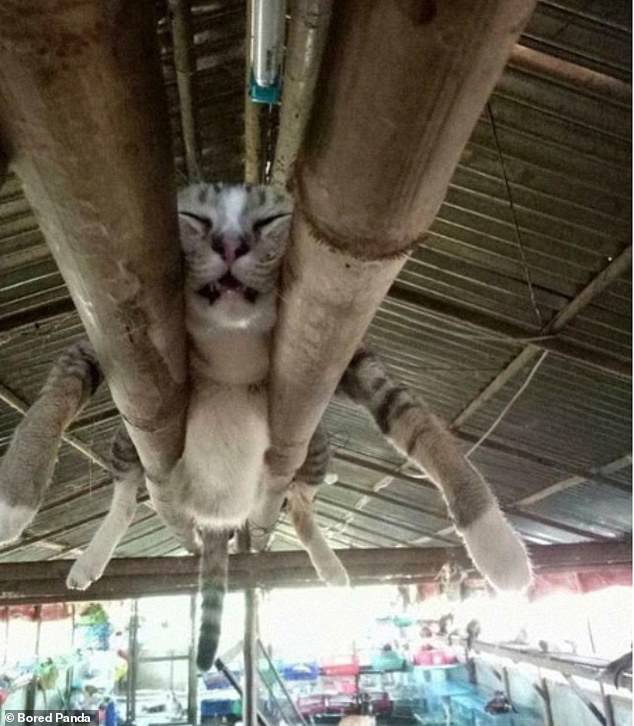 Just hanging out! This cute kitty made himself comfortable between two pipes running underneath a roof. It is unclear where the image was taken 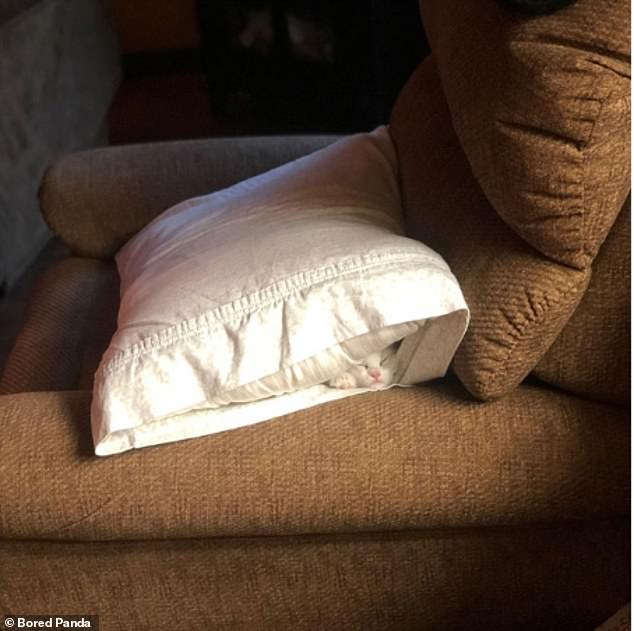 Hide and peek! Posted by a British owner, this adorable cat made a bed for themselves in a cushion case 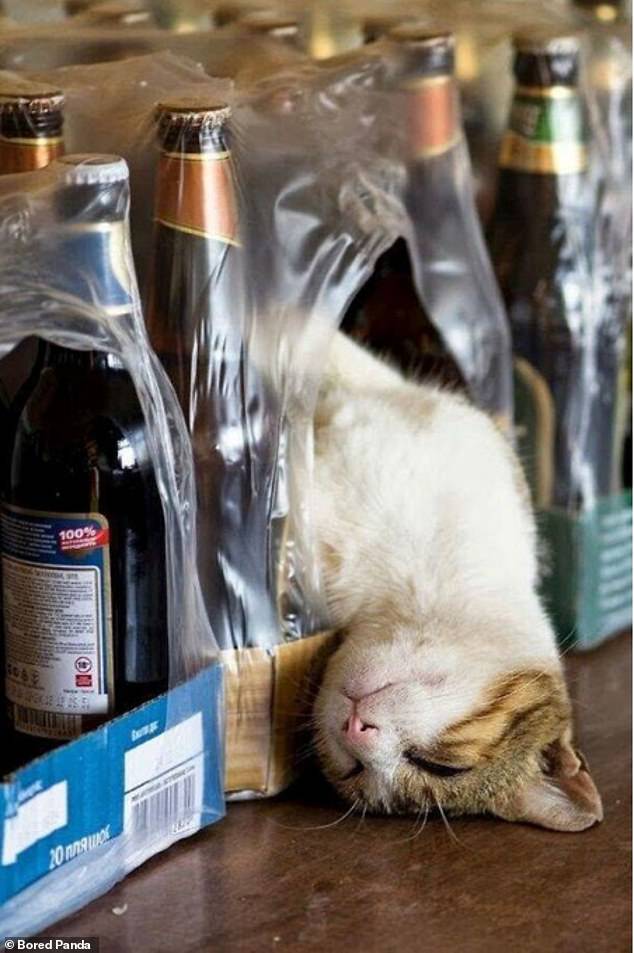 Wild night? This feisty feline decided to bed down for the night – in a beer packet – much to his British owner’s amusement 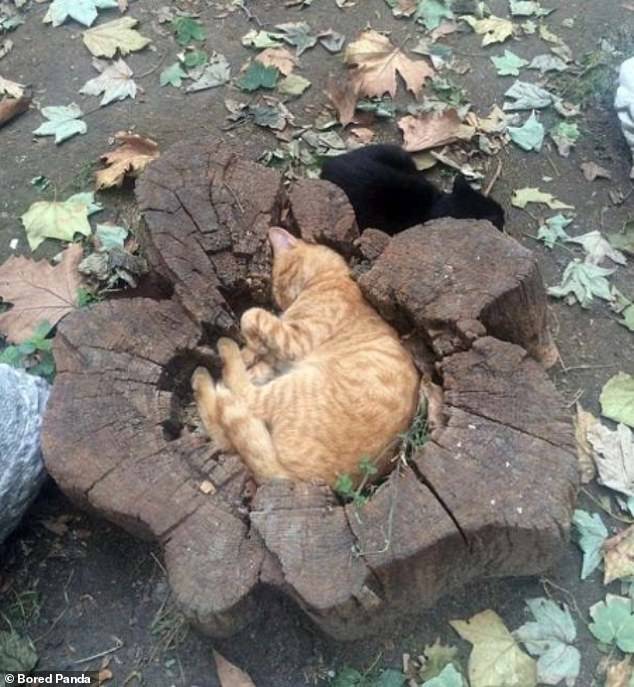 Curled up kitten! The nearly-perfect circle found in this tree log became this cat’s bed for the night. The location of this photograph remains unclear 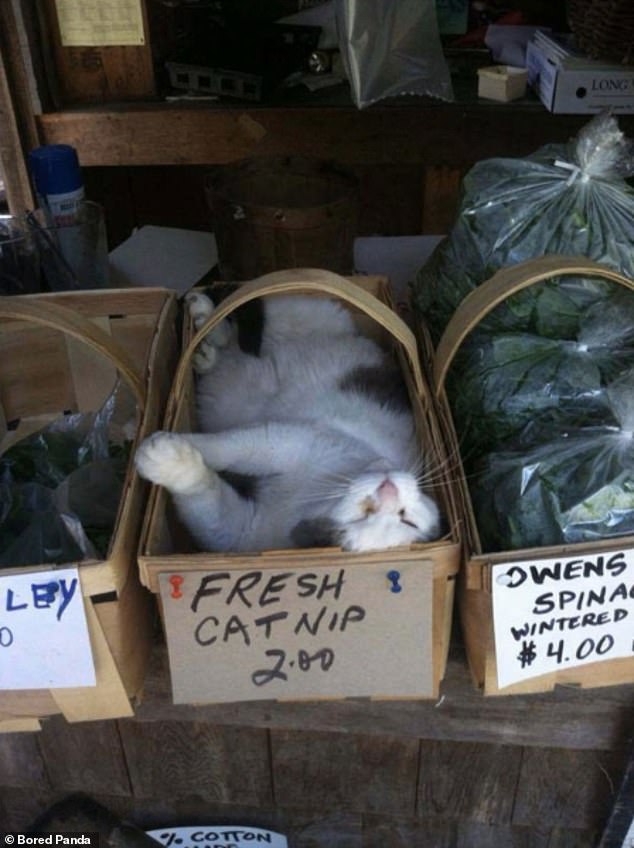 A cat-astrophe! This cheeky feline fell asleep in a basket for fresh catnip at a flower market, believed to be in America 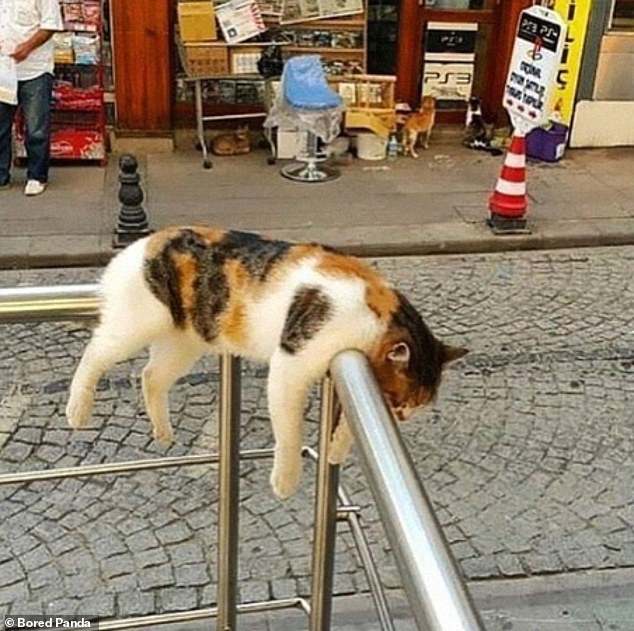 Stretching out: An adorable cat balances on some rails outside a shop believed to be in the UK 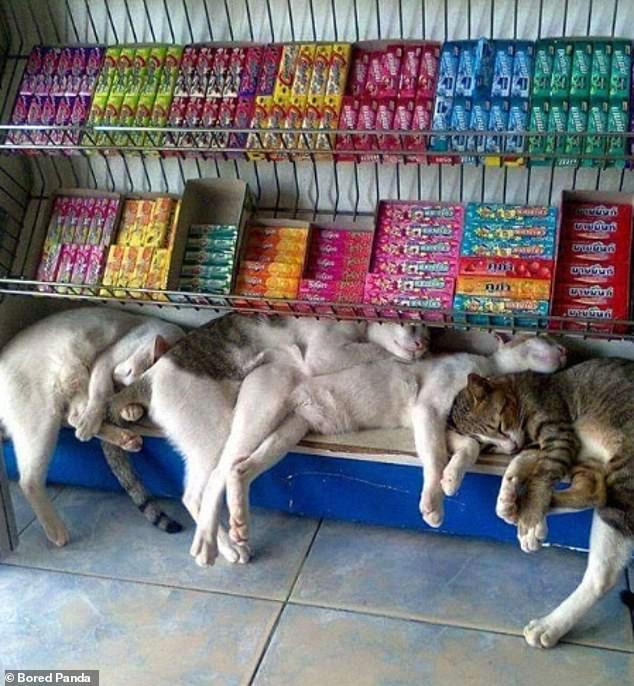 Buy one, get a cat free: Social media users were quick to ask whether purchasing a sweet at this American store would result in also getting a sleeping feline 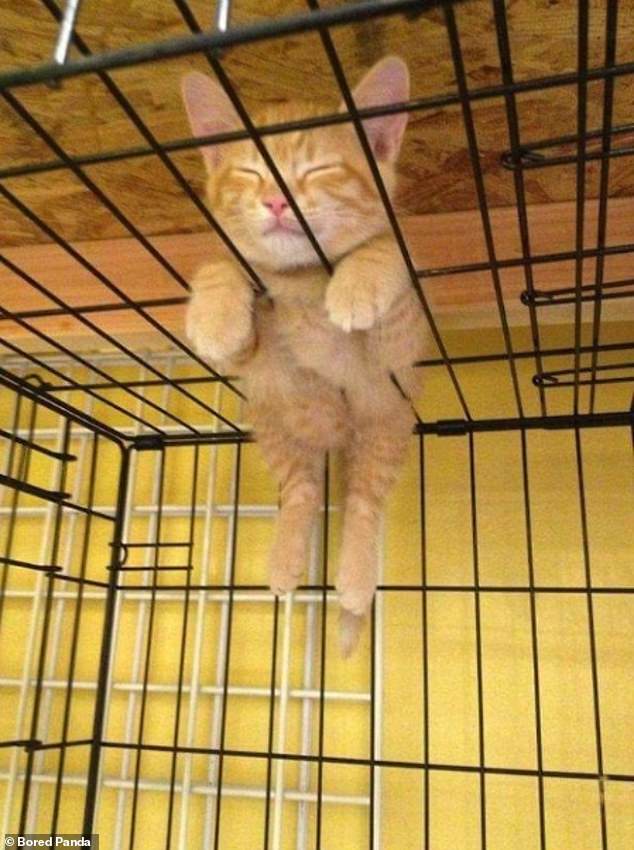 Planking: An unidentified cat idles across the bars of a cage, in an at first perceived awkward position, until noticing its tranquil face and jello hind legs 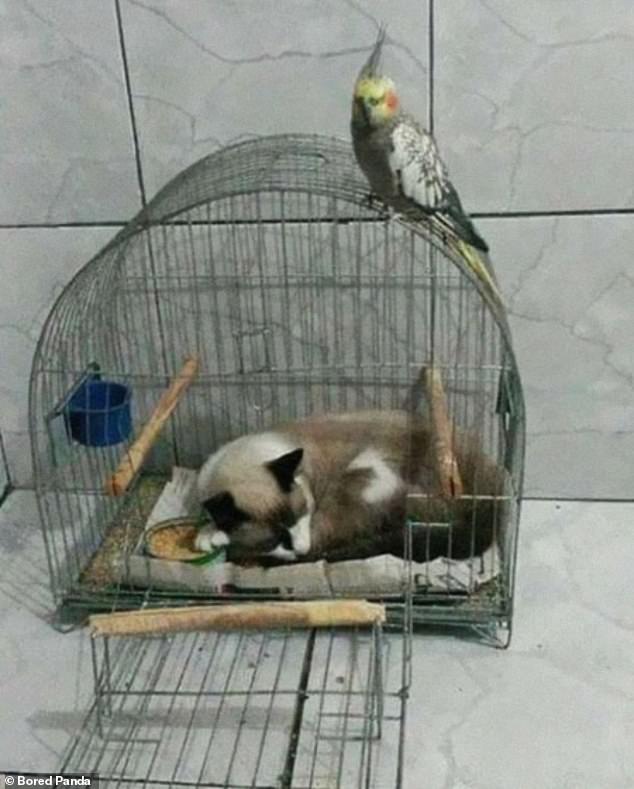 Sharing’s caring? This bird didn’t seem too impressed to see a cheeky cat taking a nap in its cage. The image was posted by a UK social media user 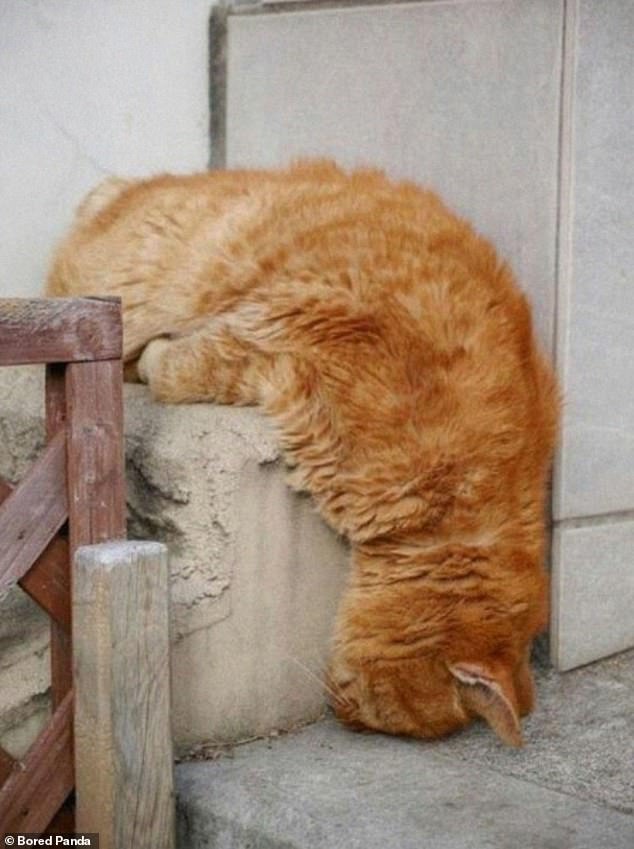 This moggie, at an undisclosed location, was clearly in cat heaven as it stretched its limbs as long as he could and looked as though he was about to fall to the floor in this amusing snap 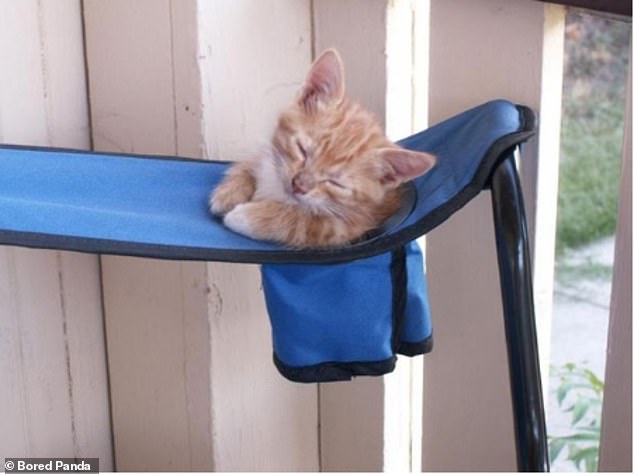 Comfy cat? This cheeky chap looked as comfortable as could be while sitting in a cup holder of a chair in an undisclosed location 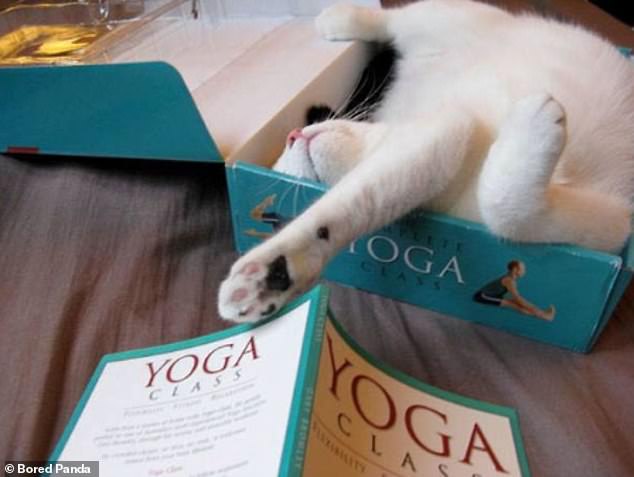 Feeling zen: This cat, believed to be from America, looked zoned out as he practised his Yoga along with his owner 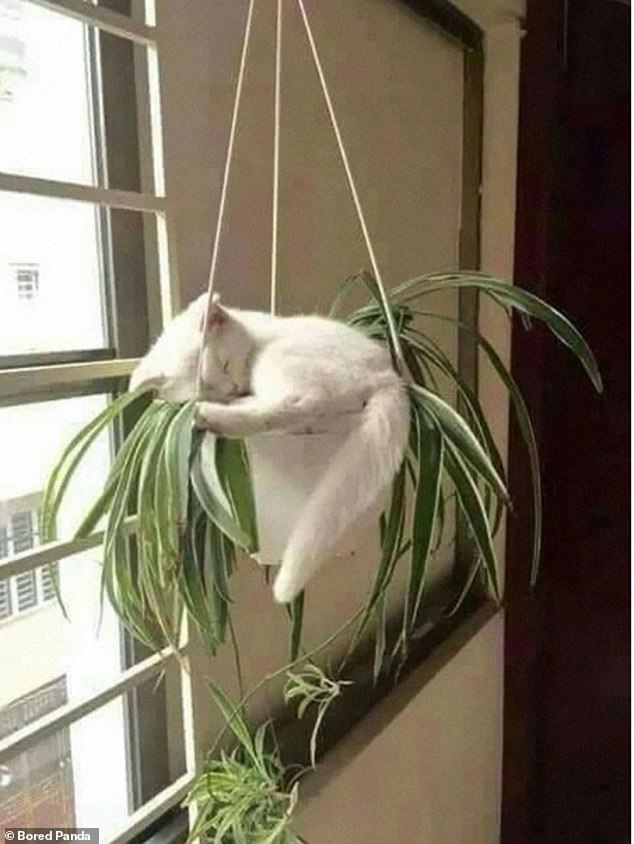 Hanging around: After potentially playing look out for mice scurrying below, a white cat is caught impressively sitting in a hanging flower pot. The destination of this photo is unclear