The coronavirus pandemic and over-optimistic assumptions about the child-rearing plans of Australian parents will force the federal government to downgrade its expectations for the state of the nation’s finances and size of the population over the next four decades.

The fifth intergenerational report, to be released by Treasurer Josh Frydenberg next week, will show the extent of the impact of the pandemic on the budget and long-term debt levels while revealing the effective loss of 1.3 million people from the forecast size of the nation. 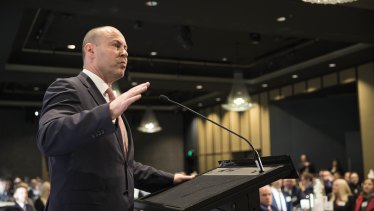 As new figures show the federal budget deficit improving from where it was expected to be just a month ago, the intergenerational report – delayed a year because of COVID – to be released on Monday will show the budget remaining in the red until the mid-2050s.

That will mean government debt growing beyond $1.2 trillion by the early 2030s before stabilising.

The debt and deficit are in stark contrast to the 2015 intergenerational report released by then-treasurer Joe Hockey, which showed a budget surplus from 2019-20 and net negative government debt.

The deterioration is largely due to the impact of the pandemic on the economy but also because spending cuts anticipated by Mr Hockey were abandoned due to the political backlash to the 2014 budget. The 2021 report will also incorporate extra spending in areas from aged care to education that was not envisaged in the 2015 report.

The other major change will be due to the coronavirus’ impact on Australia’s population growth.

The 2015 report was based on a fertility rate of 1.9 children per woman. Since then, fertility has fallen to under 1.7 and is expected to decline even further.

On top of a net outflow of migrants, related to the pandemic, next week’s report will project the number of Australians in 2024-25 at 26.7 million. In 2015, Australia was projected to have 28 million residents that year.

Data to be released by the Finance Department on Friday shows just how quickly the budget bottom line can change. 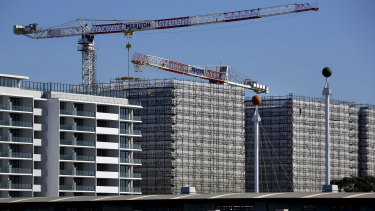 The 2021 intergenerational report will reveal a reduction in Australia’s expected population, with expected knock-on effects to the construction sector.Credit:James Alcock

In May, Mr Frydenberg forecast a budget deficit of $161 billion for the almost completed 2020-21 financial year. But monthly data to the end of May shows the deficit was $14 billion in front of those expectations at $121.6 billion.

Personal tax collections are running $3.8 billion higher than forecast while company tax collections – largely out of the mining sector – were $2.3 billion better. Total spending was $4.3 billion lower than feared, largely due to the stronger economy.

Finance Minister Simon Birmingham said the figures showed the continued strength of the economy despite the uncertain coronavirus environment.

“There will continue to be challenges ahead, but economic data is consistently showing how much better our economy is performing compared with other developed nations around the world,” he said.

Separate data compiled by Melbourne Institute deputy director Roger Wilkins shows that since the last intergenerational report there has been a further increase in the proportion of income flowing to the top 1 per cent of the population.

The income share of the top 10 per cent of the population increased to 30.2 per cent in 2018-19, the highest share since 1950 when the Korean War drove up the price of the nation’s most important export, wool.

Related posts:
June 24, 2021 Lifestyle Comments Off on Fewer Australians and bigger deficits expected in intergenerational report
Celebrity News:
What Is Offset's Real Name?
How Did Courteney Cox Meet Boyfriend Johnny McDaid? What Is Their Age Difference?
It Was Love at First Sight When Track Athletes Tara Davis and Hunter Woodhall Met at Age 16
Scooter Braun Officially Files For Divorce From Yael Cohen – & Already Has A Prenup In Place!
OMG! Prince William Is Also Writing a Book After Harry's Memoir News
Recent Posts