He appeared to be co-operating — but was shot 13 times when he instinctively reached for his back pocket.

Five Oklahoma police officers are facing first-degree manslaughter charges for shooting dead an armed 15-year-old after he dropped his gun.

Stavian Rodriguez was killed outside a gas station he had just tried to rob at gunpoint, Oklahoma City PD said.

According to reports at the time, the teen had held up the station but the employee managed to escape and lock him inside, before alerting police.

Security footage and police body cam show the officers surrounding the building and ordering the suspect to come outside.

He can be seen slowly climbing through the drive thru window as police bark orders, lifting his shirt to show the gun in his waistband, and then raising his hands in the air.

With one hand still in the air, he pinches the gun by the barrel and holds it out, slowly lowering it and dropping it to the ground.

But he then immediately reaches back towards his back pocket to police shouts of “No!” before he is shot 13 times.

According to court documents, Rodriguez had no more weapons on his person. A cellphone was found in his back pocket. 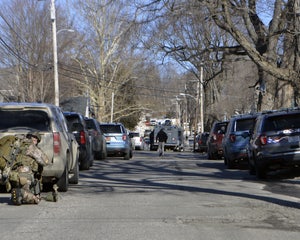 A sixth officer who opened fire was not charged, because they alone used a non-lethal weapon.

If convicted all five could face up to life in prison.

Meanwhile, another teenager has been charged with first-degree murder in connection with the death: according to court documents Wyatt Cheatham, 17, admitted to police he was involved in the armed robbery, but was not in the store when Rodriguez was shot dead.

In Oklahoma, like many other states, a suspect can be charged with murder if an accomplice is killed during a crime.

Supporters of the teen have rallied for him to be charged with armed robbery, but not murder. 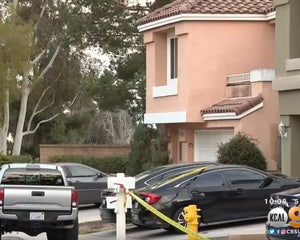