Floyd Mayweather and Logan Paul go head to head in an exhibition fight tonight and you can follow all the latest updates from the spectacle in Miami below.

The YouTuber Paul is taking a major step up from his only previous experience in the ring against fellow social media star KSI, with whom he shared an amateur draw, before losing the tightly contested professional rematch via split decision. he may have the height, weight and reach advantage over Mayweather, as well as being 18 years younger than his illustrious opponent, but that is where the positives end for Paul. Mayweather is a former five-division world champion who retired in 2015 with a perfect 49-0 record before coming back to the ring in 2017 to beat UFC star Conor McGregor and clinch his 50th professional victory.

Mayweather does have experience of an exhibition fight like this one, crushing kickboxer Tenshin Nasukawa inside one round, which suggests he will not be taking it easy against Paul – especially after their highly fractious press conference in the build-up to the fight when the YouTuber’s brother, Jake Paul, stole Mayweather’s hat, much to the ire of the boxing legend who fumed at the “disrespect”.

As this is not an official professional bout the duo will be wearing lightened 10oz gloves, but that is unlikely to spare Paul from Mayweather’s punishment. However, Paul insists it is a complacent Mayweather – who has said he doesn’t need to train seriously for the fight – who will be punished. “I think you’re going to see Floyd’s eyes light up, the first time I hit him,” said Paul. Mayweather responded: “There’s a difference between YouTube boxing and elite boxing and elite fighters.”

What Logan Paul said this week:

“This whole thing is surreal, everything about it,” he said. “I told my manager and we kind of had an inside joke that until I get in the ring with him, I didn’t think this fight was happening. But I think it’s safe to say that I can believe it now. I think it’s happening. It’s fight week. I can’t imagine Floyd would back out now, but who knows? Old man fakes an injury, gets scared of the big kid. I’m excited.”

What Floyd Mayweather said this week:

“I don’t look at is as a fight; I think my opponent looks at it as a fight,” he said during a media gathering Thursday in Miami Beach. “I look at it, for one night, I’ll be entertaining the people. I do it when I want to. We’re going to go out there have fun Sunday and give the people what they want to see.

“You never worry about height or size, it’s about skills,” he added. “And that’s one thing about Floyd Mayweather is: I’ve got skills.”

It will not surprise you to know that Floyd Mayweather is the favourite to win this fight by some distance. Mayweather is typically priced at around odds of 1/7 to take victory, while Logan Paul is the 4/1 outsider. This is about as close as it gets to an ordinary member of the public fighting an elite boxer. OK, the boxer is retired and that particular member of the public is an athletic 26-year-old who has trained very hard for this moment. But his brief experience in the ring – one drawn amateur fight and one lost professional fight, both against British YouTuber KSI – is unlikely to count for much tonight against one of the greatest movers in a ring in the sport’s history.

The emotions around this fight were stoked heavily by Logan Paul’s younger brother Jake, who took the controversial decision to pinch Mayweather’s hat from his head at the pre-fight press conference last month. It wasn’t well received, shall we say, with a fuming Mayweather heard shouting: “Where’s that mother f*****? When I catch you, I’m going to kill you! I’ll f*** you up, mother f*****, I’ll kill you!”

Read the full story of the incident which captured the world’s attention – although not necessarily something Mayweather will mind, you would think. 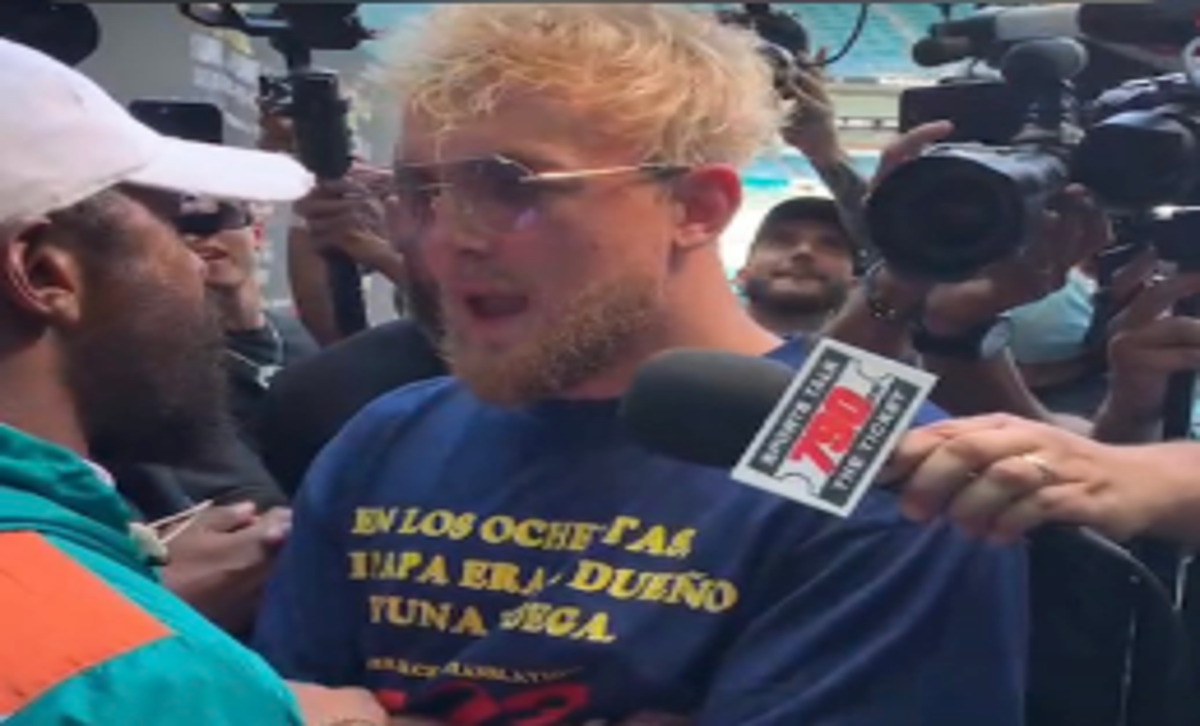 If you’re in the UK, by the way, you can watch this one on Sky Sports Box Office. The fight is priced at £16.95 and coverage starts from 11.55pm. When it comes to the main event I can’t promise you’ll get a huge number of minutes for your money, mind you…

What time is it all happening?

There are three fights on the undercard:

The night gets under way after midnight in the UK, or 8pm Eastern Time. The headline event is set to begin at 10pm ET – that’s around 4am in the UK.

A reminder that this is not a professional fight but an exhibition. So what are the rules?

For starters, Floyd Mayweather’s official 50-0 record is not at stake here, although it might come with an embarrassing asterisk should he lose tonight. The fight will be contested over eight rounds each lasting three minutes. There are no judges and there will be no winner if the fight goes the distance. That’s a big ‘if’, of course.

The pair have a major difference in height, weight and reach so weight limits were agreed for each fight ensuring a gap of 30lbs. Mayweather’s limit is 160lbs, Paul’s is 130lbs. The gloves have been reduced from 12oz to 10oz, but knockouts are still allowed.

This fight has been a long time in the making. The unlikely duo were originally due to fight on 20 February, but the pandemic put paid to that date as coronavirus raged in America. After much talk a new date was finally agreed – Sunday 6 June – and here we are. They meet at the top of a four-fight bill at the Hard Rock Stadium in Miami tonight.

Welcome along to our live coverage of Floyd Mayweather vs Logan Paul as the two go head to head in Miami tonight.

Related posts:
June 6, 2021 Lifestyle Comments Off on Floyd Mayweather vs Logan Paul LIVE: Stream, latest updates and how to watch online
Celebrity News:
The Best Portable Chairs for Music Festivals and Outdoor Concerts
Gov. Cuomo Doubles Down in Denial of Inappropriate Touching
Courtney Love Apologizes After Accusing Trent Reznor of Abusing ‘Girls as Young as 12’
Who Is Carly Lawrence From Too Hot To Handle?
‘Dull as Prince William’ John Cleese aims jibe at royals as he bemoans Euro 2020 matches
Recent Posts