Three months ago Patti Smith was sitting in a hotel room in Paris waiting out a pension reform protest that was crippling France. Her daily ritual of venturing to a nearby cafe for morning coffee and journal writing wasn’t possible that day.

Some minor travel plan changes were made, but that didn’t bother Smith because she understood what was happening on the street. In fact, it took her right back to 1988 Detroit. 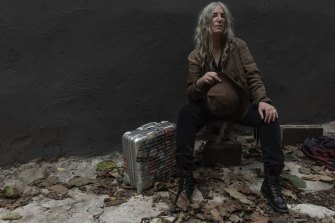 That’s when she co-wrote People Have The Power with her late husband Fred “Sonic” Smith whose rock band MC5 tried to overthrow capitalism with loud guitars in the 1960s. Detroit Rock City at this time was heaving with rebellion, political riots and a White Panther movement that fought against racism too.

“My late husband Fred really anticipated the power of the protest song,” says Smith, who next month arrives back in Australia for a national tour and a headline spot at the Blues Festival in Byron Bay. 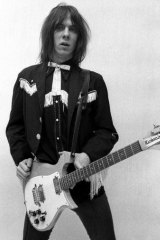 The 73-year-old New York singer and songwriter, who has made a career fusing poetry with punk, is no stranger to voicing political dissatisfaction through song. She’s written about the Vietnam War and her father’s own part in the second World War on many occasions.

“Fred and I wrote People Have The Power together; it’s an empowering song and lays out concerns about the environment, war and Presidents,” Smith says. “But in the end it’s saying the power of the individual is stronger and the people’s power is infinite.”

Sadly Fred, who died in 1994, never got to see that song performed live; but he knew that day as husband and wife, they nailed an anthem.

“What we’re seeing in Paris,” Smith said as 2019 came to an end “with pensions and global climate change strikes is that people want change.

“I don’t mind being inconvenienced by a strike if it means people want to stand together. It’s heartening especially in an atmosphere where governments and corporations are being awful.”

Smith has released numerous books – from poetry to novels, including the award-winning Kids, M Train and more recently, Year of the Monkey – and she continues to delve into the personal and political all in the constant pursuit of creating art, speaking her mind and in the process, whether consciously or otherwise, inspiring others.

And in an era where social media prompts all kinds of revolution through hashtag solidarity; Smith – who is still defiantly one of New York’s finest, strongest voices from the 1970s – says people should use the modern social media to their advantage.

Beds Are Burning is still a politically relevant song; it moves me deeply and to come to Australia and sing it to the people there will have an even deeper significance.

Her Instagram feed is filled with art references, touring on the road, rediscovering books and saluting her nearest and dearest. There’s set lists from shows she’s played the night before, that famous image of American speaker of the House of Representatives Nancy Pelosi tearing up Trump’s speech to climate activist Greta Thunberg. Smith is there among it all – giving the godmother of punk salute to those who stir plenty of emotion within.

“Instagram is my way of giving personal and cultural reports to my fans,” she says. “And I’ve found a way to make it a place that is positive among the dark aspects.”

While many of her rock contemporaries have departed planet Earth, Smith prefers to focus on what there is to gain from life than focus on what has gone. She knows only too well the pain of loss in life – losing her brother Todd in the same year as her husband died of a heart attack in 1994. Only a few years before she had lost her former boyfriend and photographer Robert Mapplethorpe to AIDS and band member Richard Sohl died around the same time.

“Whenever I’m having a hard day I think of all that human beings have gone through in history from World War One and World War Two to the bubonic plague and Syria and beyond. And personally, no matter how bad things are in my world – with loss of many men I have loved – I know people are going through a much more difficult life than me,” she says.

However, for all her bravado, sometimes memories can crack the strongest of punks. That’s what happened last December while performing in Rivena, Italy. Smith dedicated the show to her brother Todd on the 25th anniversary of his death.

“The show wasn’t about making myself feel sadder, it was dedicated to his good heart, his energy, it was in remembrance of Todd,” she says. “I still can’t believe he’s been gone for 25 years.

“I always feel him with me wherever I go. But when someone throws me a number and puts years on it, I sort of go into shock at how much life has happened since. Some months I’m fine with it and look at pictures and don’t cry, and then all of a sudden the pain can be unbearable and you find yourself crying uncontrollably. My pain comes in waves. No matter how old you are, that doesn’t change.” 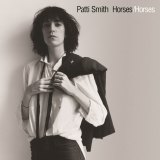 The cover of Patti Smith’s Horses album was shot by Robert Mapplethorpe.Credit:

When Patti Smith emerged in New York’s East Village reciting poetry to a scraping punk backdrop she was quickly dubbed a contemporary of Bob Dylan, a force to be reckoned with in a scene that spawned the likes of Lou Reed, The New York Dolls and Television. Her debut album Horses in 1975 is hailed as one of the best examples of Beat-poetry lyrics and artful punk of all time.

She has released 11 studio album, three live albums and four spoken word recordings. She co-wrote Because The Night with Bruce Springsteen, became good friends with William S. Burroughs after meeting him at the Chelsea Hotel and had Bob Dylan turn up at a concert in the ’70s in a time when he rarely ventured out to see new acts.

She admits to not being overly comfortable writing songs but is always happy to put pen to paper all in the name of poetry – and hints that’s where her next album will head – soundscapes and poems.

She’ll always choose intimate concerts in churches and opera halls over stadium shows and travels with her musician children Jackson, 38, and Jesse, 32 [and gives them the embarrassing Mum shout-out on social media when she can].

Her final tour of Australia happened in 2017 – until she had a change of heart.

“I know that I said I wouldn’t come back, but here I am,” she says enthusiastically. “Travel is really hard on me because I have a bronchial condition, so doing those long haul flights really impacts me. But the response from the fans is so endearing and I thought, OK, this is it – and I’ll do New Zealand too – one more time.”

Her unshakable ode to protest movements will be felt when she plays a cover of Midnight Oil’s Beds Are Burning with her band in Australia.

“Beds Are Burning is still a politically relevant song; it moves me deeply and to come to Australia and sing it to the people there will have an even deeper significance,” she says. “That song has always been significant, but it’s even more so in these crazy modern times.”

Patti Smith performs at the Blues Festival in Byron Bay over the Easter long weekend; the Enmore Theatre in Sydney on April 15 and 16; and The Forum Theatre in Melbourne on April 21, 22 and 23.