The Premier-elect, Mr Cain, begins the transition to office this morning with a meeting between the four ALP and four Liberal leaders to discuss making the change as smooth as possible.

The meeting was arranged at the suggestion of the Liberal Government after Labor on Saturday was swept into office for the first time in 27 years with an overall likely majority of at least nine seats. 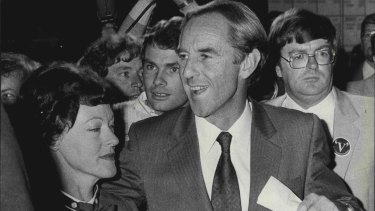 Mr Cain said yesterday he was determined to form a Government by Easter. This means that a meeting of the parliamentary party is likely on Wednesday to elect the new Cabinet. Candidates in seats which are still doubtful might be admitted.

The Liberals lost four Ministers, including the Deputy Premier. The Cabinet secretary and the Speaker also went in the swing to Labor, which was 4 per cent after preferences. 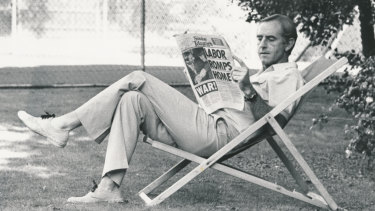 The Victorian Premier-elect, John Cain, relaxes in his garden the day after the election.Credit:John Krutop

Some ministers spent yesterday afternoon cleaning out their filing cabinets. It is believed that some material was put through shredders.

Mr Cain and shadow Ministers moved quickly yesterday to head off expectations of early dramatic changes. But the Shadow Health Minister, Mr Roper, warned that hospital charges might have to go up and the shadow Transport Minister, Mr. Crabb said he would act to cut some fares as soon as new tickets could be printed.

Labor did not win control of the Legislative Council. It holds 18 seats to the Liberal Party’s 22 and the four held by the National Party.

The Premier, Mr Thompson, and the Leader of the Government in the Upper House, Mr. Hunt, gave assurances that they would respect Labor’s mandate. But neither would give an undertaking that the Liberal opposition would not use its numbers to block Supply. In a brief statement, Mr Hunt said: “I respect the mandate given by the people and would not be a party to the Upper House frustrating that mandate.”

Mr Cain said: “It was a massive result for us. I don’t think there’s more than one occasion when a party in this State has had that sort of direction from the electorate. I regard it as a mandate.” He said he did not believe the Upper House would “fly in the face of that direction.”

Mr Cain said that a priority of the Government would be the establishment of its planned Victorian Development Fund. He said: ”The VDF marks the difference between us and them. It’s endorsed by the public. They want us to show some initiative in economic issues in Victoria and we intend to do it.”

Mr Cain would not speculate on other priorities. He said: “That’s a matter for the Government to decide. We’ll have a sub-committee of Cabinet whose job it will be to determine priorities.” He said he had discussed what remained of the Budget allocations for the remaining three months of this financial year when he met public service heads yesterday.

Mr Cain said Labor’s object was to implement its programme “as far as it is possible within three years. The timing and the way its implemented is a matter for us to make decisions about in the coming three years.” 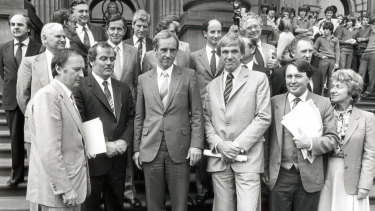 The new Cabinet with the Premier John Cain on the steps of Parliament House.Credit:John Lamb

Mr Cain said he expected Parliament would sit for four or five weeks from the middle of May. “We are not sure how Parliament will function in terms of sittings. We have got some ideas about not just having two sessions a year. We think Parliament should meet more frequently for shorter periods and specify the legislation it will be dealing with, so that the parties and the public are better informed.”

The State Liberal leadership issue is expected to be settled at a meeting of the Liberal Party due for next week. Mr Thompson said he would “do whatever is in the best interests of the party” but would not comment further on his position, or the likely candidates for the deputy leadership.

Mr. Thompson blamed the Government’s loss on the fact that the Liberal Party had been in power for 27 years. “The biggest difficulty we had to overcome was to justify a further period after 27 years of office,” he said. He also said that speculation that Mr Andrew Peacock would challenge the Prime Minister, Mr Fraser, for the Federal leadership had not helped.

Mr Thompson said he had to accept some responsibility for the Government’s defeat. “Usually when a football team loses a premiership the coach accepts some of the responsibility and I feel a little bit like, say, Tommy Hafey, explaining why Collingwood has not won another Grand Final. As leader of the party, I cannot claim the result was a triumphant success. I think we did everything humanly possible to win.”

Mr Thompson said a final result was required from the Electoral Commission before government could be officially handed over to the ALP. He expected this to take place later this week. “We won’t do anything to delay a smooth transition,” he said.

Mr Thompson said Mr Fraser had contacted him on Saturday night and congratulated him on the campaign and expressed regret at the result.