The husband, wife and two children were tied up, but managed to break free after the prisoners fled, taking their Ford sedan, $200 and a .22 calibre rifle. 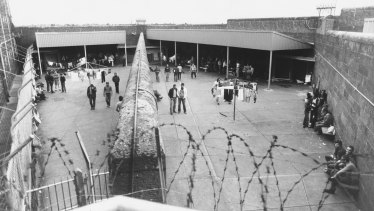 Prisoners in the exercise yard at Pentridge Prison in 1983.Credit:The Age Archives

Police said the family were Mr Claude Egeberg, a plumber in his 30s, his wife and two young children.

The escapers indicated to their hostages that they were prepared to shoot it out, police said. Throughout their ordeal they were menaced with knives.

Police said the four broke into the family's house in Sharp's Road, Smiths Gully, five kilometres north-east of Hurstbridge about 7 am and kept them imprisoned until about 8 pm. They cut the phone line when they left.

Two of the escapers are believed to have earlier abducted a man at knifepoint and stolen his car from the car park of the Matthew Flinders Hotel in Chadstone. 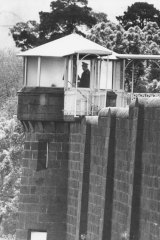 A guard tower at Pentridge Prison in 1983Credit:The Age Archives

The escape from Pentridge's J Division — using detailed layout plans and machinery stolen from the prison workshops — is the seventh from the jail this year and the most elaborately planned in the prison's history.

The Minister for Community Welfare Services, Mrs Toner, last night came under severe criticism from police and the Opposition for failure to carry out security improvements.

One of the four, Peter Kay Morgan, and his identical twin brother Douglas — still in jail — were known as the “After Dark Bandits".

Detectives from the major crime and armed robbery squads will man a continuous phone service for information from the public. They urge anybody seeing the men or the stolen car to phone them on 667 1420 or 667 1422.

The four escaped on Saturday night from high-security J Division less than four months after security was stepped up after another escape.

The latest escape is expected to lead to yet another security review at the jail.

The escapers are believed to have detailed layout plans of the section and used machinery stolen from prison workshops and home-made implements to escape. Mrs Toner has asked for a report on the incident.

In January, after a series of other reports, the State Government admitted that security and some procedures by Pentridge officers were inadequate and invited an American prison expert to inspect the jail and recommend changes. His report is due to be released next week.

The head of the Melbourne CIB, Chief Superintendent Phil Bennett, said police were tired of being "shot at and harassed" by escaped criminals. "It's hard enough to catch and convict an armed offender once, let alone twice," he said. "The Morgan twins took us 18 months of strategic planning to catch. Now one is out again." 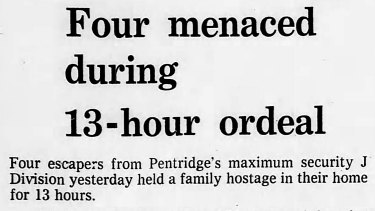 Extract from The Age published on April 18, 1983Credit:The Age Archives

Police said Saturday's escape occurred as plans were under way to introduce a drama group to J Division. They said the men were with 11 other prisoners in the section's recreation hall and had erected a fake backdrop on a stage to hide their escape plans.

Warders did not know the four were missing until a roll was called about 10.15 pm. Police believe they fled the jail about 8 pm, after Bradley prepared coffee for about 11 other prisoners.

After the escape, the first clue to the whereabouts of the men came about 10.30 pm when a man was abducted by knifepoint by two men in the car park of the Matthew Flinders Hotel, in Chadstone.

Police are convinced that the abductors were two of the Pentridge escapers because they then drove to a paddock near the hotel, picked up two other men, and continued to Rowville, where they tied their hostage to a concrete power pole with his tie, a belt and another cord, before speeding away in his car.

The man freed himself a short time later and walked to Dandenong police station where he raised the alarm.

Detectives believe the escape had been planned for some time and was a closely guarded secret among the four.

The men used a hydraulic ram, similar to that used by panel beaters, to bend bars away from a ventilation duct in a wall behind the false stage set.

They then climbed into the ceiling of the brick building and removed a "witch's hat" air duct cover to gain access to the corrugated iron roof. They lowered themselves about 14 metres to the ground using several pieces of electrical flex tied together and looped to provide footholds.

After reaching the ground the men went through an open gate and ran to a five-metre fence, which they cut with a pair of pliers or clippers. They then ran to the jail's northern wall, where they used a home-made wooden ladder to climb the bluestone and jumped about seven metres to freedom.