Patrick White dies, aged 78; an era is over

Patrick White, the author, died at his Sydney home early yesterday. He was 78. 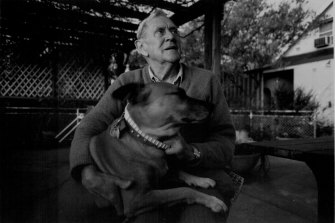 Patrick White at his home in 1984.Credit:Philip Wayne Lock

Mr White was Australia's first winner of the Nobel Prize for Literature. He won the prize in 1973 for his novel 'Eye of the Storm'.

His death, at his Centennial Park home, came after an illness lasting several weeks. He was reclusive in recent years as his health failed, but he remained active within the anti-nuclear movement.

Mr White's death was the end of an era, Mr Thomas Shapcott, a former director of the Literature Board of the Australia Council, said early this morning.

"Without doubt he was the most important single writer this country had, and his winning of the Nobel Prize in 1973 was a landmark in our literary history. It opened the way for international recognition of Australian literature and it was a cultural turning point."

Mr Laurie Clancy, senior lecturer in literature at La Trobe University, said that Mr White would be sadly missed. “His vision was unique and worldwide, and he singled out those he felt were neglected. He focussed on the exceptions in society."

Mr Clancy said that Mr White's courage and generosity were evident after he won the Nobel Prize. "He's the first writer who has put Australian literature on the map." 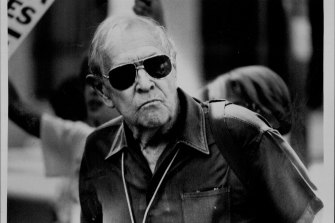 Patrick White makes an appearance at a nuclear disarmament rally in 1986.Credit:Peter Solness

He was also outspoken on a range of issues. Mr White, despite his illness in later years, kept up his interest in politics, and he continued to speak out. In 1988 he made a scathing attack — punctuated with expletives — on the Bicentenary, the plight of Aborigines and what he viewed as Australia's international "subservience".

Explaining his refusal to have any of his work performed or published during the Bicentenary, he said: "There was too little I could feel proud of in our past — even less in our present."

The poet, playwright and novelist was born in London in 1912 of Australian grazier parents. His initial education was at Moss Vale, in New South Wales, and in Sydney, but later he went to Cheltenham College, England.

He came back to Australia in 1929 to work as a Jackaroo in NSW, but disliked the life so he returned to England to study languages at Cambridge and stayed to serve in the RAF during World War II.

His first published work was a book of verse, 'The Ploughman And Other Poems', published in Sydney in 1935.

Mr White also set up an award worth almost S7000 for distinguished Australian authors with his Nobel Literature prize money of $80,000.

Mr White was appointed Companion of the Order of Australia in 1975 but he resigned from the order in 1976.

He was vehemently opposed to censorship and the Vietnam War. He publicly supported Labor in 1972, mostly because of his concern over Aboriginal rights and urban development.

In 1974, the year after winning the Nobel Prize, he was named Australian of the Year. After the dismissal of the Whitlam Government, he returned his honor in the Order of Australia and became a supporter of constitutional reform and republicanism.

A critic of the Fraser Government, he became disillusioned with the new Labor Government's policies on uranium mining and foreign alliances. Instead, he supported the Nuclear Disarmament Party.

Mr White spoke out during speculation in 1988 that the then Minister for Foreign Affairs, Mr Hayden, would succeed Sir Ninian Stephen as Governor-General.

He urged Mr Hayden: "Don't do it Bill. You've been sacrificed once to Hawke. Don't let it happen a second time. I wouldn't like to see Yarralumla wreck my respect for an honorable man. So I repeat, don't do it, Bill Hayden, don't do it".