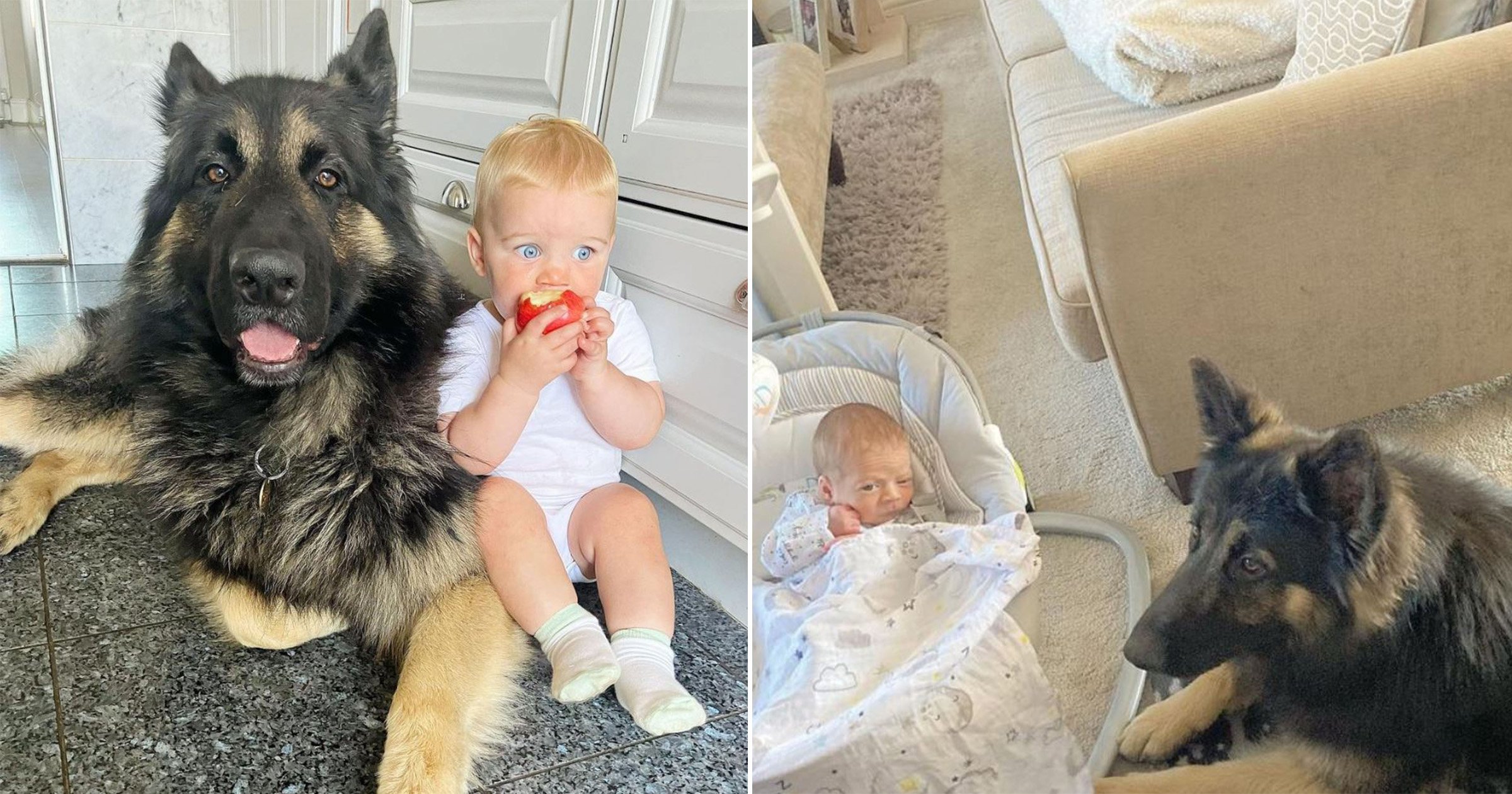 Meet Leo and Rox, two best buds who’ve been friends ever since the one-year-old was born.

Even before Leo was in the world, German shepherd Rox started to bond with mum Maddie Butler’s bump.

Maddie, 30, said: ‘Rox’s nature completely changed around me when I was pregnant, and he always shows his gentle nature around Leo.

‘When we first got Rox he was a crazy, bouncy puppy with so much energy, needing lots of exercise, attention and care.

‘He’s affectionate but not really cuddly. He might sit with you for a bit, but he likes his own space too.

‘Yet once I was pregnant his nature really seemed to change, and I noticed this more when my husband worked away.

‘If my husband wasn’t here for long periods of time, it was like Rox decided he was the man of the house and would be protective over me.

‘He also became incredibly cuddly. It’s like he knew I needed extra care. He used to lick the bump which I think was his way of saying he cared.’

Maddie, from Whitby, North Yorkshire, noticed yet more of a change in Rox in the days leading up to what would be her five-week-early labour.

Maddie, a paramedic, said: ‘In this time Rox became increasingly more protective, acting strange and he wouldn’t leave my side for a minute.

‘Now Leo is here they’re as thick as thieves and completely inseparable. I think every time I turn around, I catch them cuddled up together.

‘Leo now knows where the treat cupboard is so always gets a treat out for Rox, and if any other kids do the same Leo gets jealous!

‘Rox is honestly so different and gentle around Leo. When we play fetch, we normally have to fight him to get the ball back, yet he just drops it for Leo.

‘When we’re eating, Rox is always under Leo’s chair waiting for his scraps to hoover up and I really do think they have the most special of bonds.

‘So special in fact, one of Leo’s first words was actually “dog dog!”‘

Maddie totally trusts Rox with the baby, but some family members have expressed concern over letting such a big dog hang out with Leo.

Maddie said: ‘Some people were concerned, such as older members of the family, with them asking how I was going to manage them both.

‘I feel like we’ve actually coped so well! We were careful and made sure to socialise Rox into the idea of having a baby.

‘We took part in professional training classes with him, and we also made sure Leo’s Moses basket was around, so Rox got used to it.

‘It comes down to training your dog and knowing your dog’s nature. I completely trust Rox – he’s never been aggressive or anything like that.

‘However, we are very vigilant in making sure Rox gets time on his own and not being annoyed by Leo constantly.

‘We have a baby gate to stop Leo getting to Rox, so he can have some peace and quiet.’

Related posts:
September 20, 2022 Lifestyle Comments Off on German shepherd and baby are best mates: 'They have the most special of bonds'
Celebrity News:
NXIVM Sex Cult Leader Keith Raniere Claims He Got Attacked In Prison – And Makes Bold Claims Against Authorities!
Aston Merrygold Shows Off Wedding Band After Marrying Fiancee Sarah
Queen and Prince Philip reunited at last as she’s buried in chapel beside him
President Biden met with the families of Brittney Griner and Paul Whelan
Entry to See Queen Elizabeth Lying in State Permanently Closed
Recent Posts