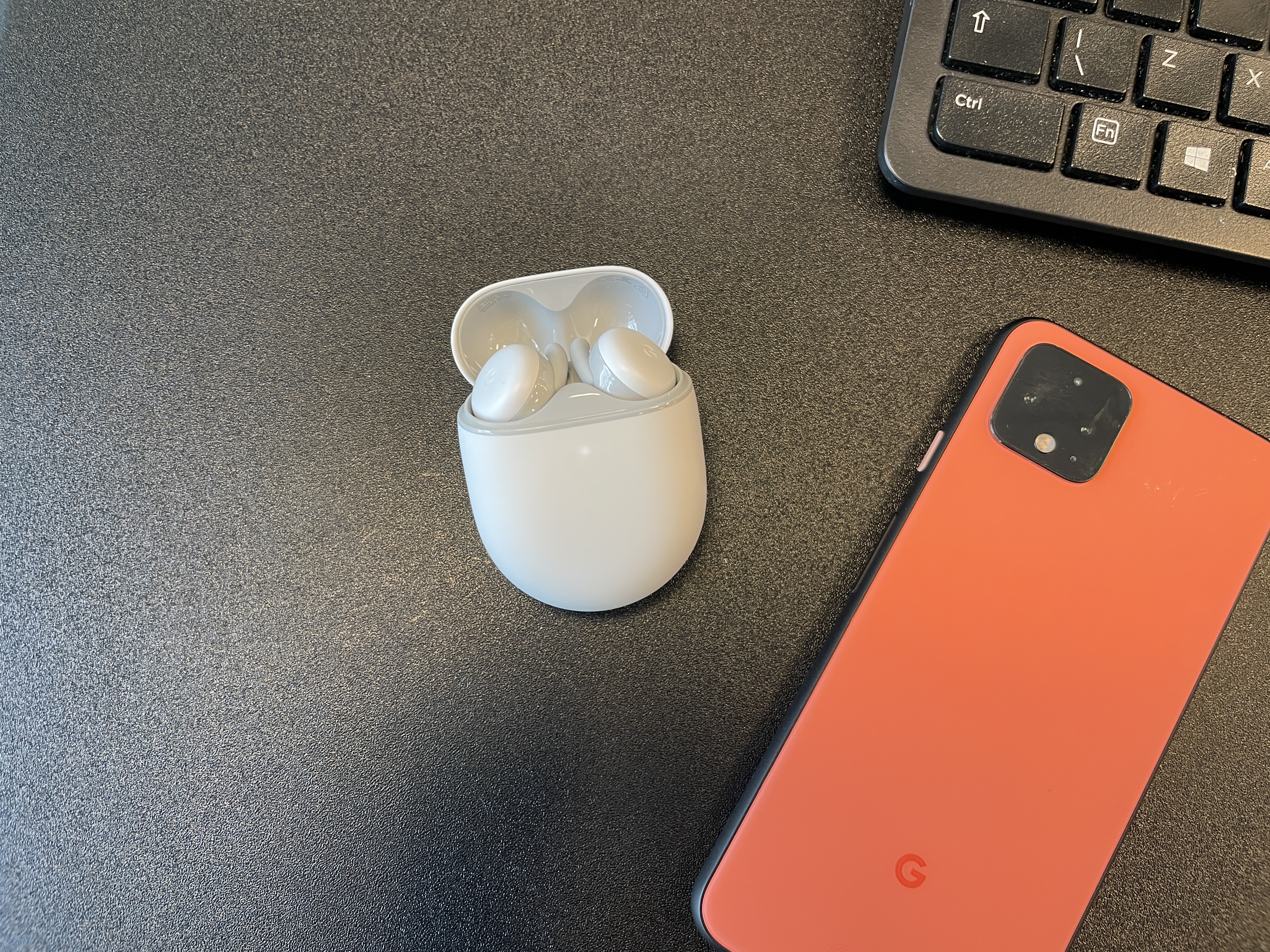 Google’s roadmap for its Pixel phones has followed a certain trend for some years now.

First comes the flagship model and then, a bit later, an ‘A’ version offering a bit less at a more reasonable price.

The thinking is the same: offer most of the features at a more competitive price.

And even though they’re supposed to be ‘budget’ headphones, there’s a lot to like here.

For starters, they’re small and discreet. Unlike the AirPods, the Pixel Buds A-Series are teardrop-shape and tuck into your ears with a rubberised tip and ear guard to keep them in place.

Each one weighs just 5.06g and they snug into a charging case that looks like a cross between a pebble and a Tamagotchi.

Charging is handled via USB-C and they’ll connect with Fast Pair to any Android device running Android 6.0 or later. For other gadgets, there’s a pairing button on the back to manually connect via Bluetooth like any other headset.

The outer shell of the casing and each Bud is the same soft-touch plastic as the regular Pixel Buds, although the interior is cheaper-feeling glossy plastic and there’s also no secondary LED on the inside of the case.

When it comes to sound, the Pixel Buds A-Series deliver a more than adequate experience for the average listener.

Google says it has added 12mm dynamic speaker drivers that deliver a ‘natural’ sound no matter the content.

I tried these right alongside a pair of the full-fat Pixel Buds and I honestly couldn’t tell much difference.

There’s also a process at work called ‘Adaptive Sound’ that uses Google’s software smarts to subtly optimise volume based on your location. In practice, it works well but I didn’t feel it was as effective as the active noise-cancellation in other wireless earbuds.

The AirPods Pro (£249) are top of the heap in that regard, but there are also decent budget buds like the Freebuds 4i that utilise the feature. The Freebuds 4i actually undercut the Pixel Buds A-Series at £80, so if your main aim is to save cash – try looking at those.

There are some neat software tricks that come in handy if you can’t reach your phone.

You can tap the smooth, flat surface of the Bud to play and pause media or answer calls while a double and triple tap will skip forward and back respectively.

I actually ran into trouble with this during my testing. There was no problem streaming songs from Spotify, but occasionally during playback of MP3s stored on the phone (through Poweramp) my play/pause taps failed to register. This only happened once or twice and skipping between songs was completely unhampered.

The Pixel Buds A-Series have full integration with the Google Assistant which will obviously be useful to many. And in-ear detection means playback will automatically pause when you take the Buds out of your ear.

Like their forebears, the Pixel Buds A-Series can offer real-time translation via the Google Translate app.

If you’ve got it installed on a Pixel or any other phone running Android 6 or later you can activate it by saying ‘Hi Google, help me speak Spanish’ (or whichever language you want). You then tap the side of the bud and speak in your language to have it translated on the app.

The other person then speaks into the phone to have it translated back into your ear.

The feature did work for me but, like with the previous set of Pixel Buds, I found it easier to just run the same feature through the phone directly.

I couldn’t manage a five-hour uninterrupted listening session but the battery power on the Buds did get me through most of a day at the office. Together with the charging case and casual usage, the Buds will easily go a couple of days before they need to be charged up again.

One small drawback to the Pixel Buds A-Series is that the case can’t be charged wirelessly. This may not be a deal-breaker for anyone, but I’ve become used to just dropping my gadgets down on a small wireless pad tokeep them powered up. With wireless charging on both the AirPods and regular Pixel Buds, it does feel a shame to have to go back to plugging in a wire.

But overall, I was still really impressed with the Pixel Buds A-Series. I particularly like the fast pairing and the fact they’re light and discreet enough that you can almost forget you’re wearing them.

The original Pixel Buds are as near as you can get to Apple’s AirPods experience on Android. With the Pixel A-Series, Google has barely diminished that experience and made it cheaper to boot. Which makes these wireless budget buds extremely easy to recommend.