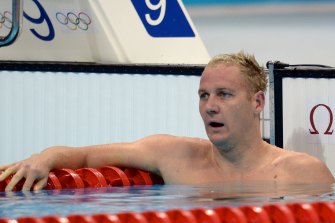 Rickard, a world champion breaststroker and retired national swim team leader has told The Age and the Sydney Morning Herald he feels “fully vindicated of any wrongdoing”.

Rickard’s bombshell positive to a banned diuretic and masking agent Furosemide – revealed eight years after he medalled in a relay at the 2012 Summer Olympics – had threatened to stain Australian Olympic history irrevocably. Five Aussie super fish, including James “The Missile” Magnussen were poised to be fall guys.

Anti-doping experts gave Rickard next to no hope of success when he took his case to world sport’s highest authority – the CAS – in November 2020 at his own expense.

“This case has taken a huge toll on my life over the past 16 months,” Rickard told The Age and the Sydney Morning Herald after a watershed win. “It has impacted me emotionally, professionally, financially, reputationally and, in general, affected my mental health.”

Now 37, Rickard, a former president of the Australian Swimmers’ Association, has suffered depression through the protracted ordeal. His move towards a high-performance sport role became untenable when his life was up-ended late last year.

Immediate ripple effects from Rickard’s victory at the CAS include the formal reinstatement of Australia’s clean Olympic medal record.

The World Anti-Doping Agency has now enshrined new “Minimum Reporting Level” rules for select banned diuretics. The Age and the Herald can reveal new protocols will relate to specific diuretics that are known contaminants of over-the-counter pharmaceuticals.

Rickard’s retroactive screening of a doping sample he provided at the London Games revealed traces of Furosemide. Rickard’s legal team argued the masking agent was in an “exceedingly small concentration” and said “over-the-counter medications” Rickard took in the days before his Olympics drugs test must have contained the banned diuretic.

WADA’s blanket strict liability rules had no flexibility. But Rickard’s fight will trigger a rewriting of these rules in a major development in sport.

Rickard’s lawyer Rebekah Giles, from reputational risk law firm Company Giles which has acted for Brittany Higgins, Christine Holgate and Christian Porter in the past year, told The Age and the Herald: “Brenton was a sitting duck. [He] was faced with impossible task of proving contamination some 8 years later. He could not do that in 2020 and as it turns out he could not have done that in 2012 either.

“The technical capabilities of the anti-doping authorities far surpassed those of the pharmaceutical companies who screen for contaminants or independent laboratories who conduct batch testing.”

Giles said Rickard was “embarrassed, ridiculed and deeply impacted” through the case. She added that the outcome “has come 16 months too late for Brenton, who has suffered greatly”.

Rickard was part of the men’s 4×100 metre medley team that won bronze at the 2012 Olympics. His positive test eight years after the Games rocked the Australian Olympic community when it was revealed six months ago.

Australia has never lost an Olympic medal through a drugs case. When Rickard’s positive became public he told his Australian teammates he was living his “worst nightmare”.

In a shattering fallout the entire Australian 2012 Olympics 4×100 metre men’s medley relay team – Christian Sprenger, Hayden Stoeckel, Matt Targett, Tommaso D’Orsogna, Magnussen and Rickard – were to lose their medals just before WADA’s statute of limitations was to expire for the 2012 Games.

Rickard only swam in the heat of the medley at the London Olympics but disqualification and anti-doping rules in swimming do not isolate individuals; they skittle entire relay teams.

Rickard said: “I am all for strict punishments for drug cheats, but not all cases are clear-cut and the burden of proof on an athlete can be near enough to impossible, such as was my case in attempting to prove the source of contamination on a re-test eight years after the initial test.

“While the outcome that finally clears my name is the best I could have hoped for, this case has taken a huge toll on my life over the past 16 months.”

Of the profound change to WADA’s strict liability rules Rickard added: “Some of the fundamental principles that the anti-doping system were built upon, most notably strict liability, have not been amended in line with the advancements in testing procedures and whereabouts requirements.

“My case clearly demonstrates why absolutes are dangerous and how rigid rules can operate unfairly against an athlete with potentially devastating consequence.

“The system was very close to stripping six Australians of an Olympic medal without acknowledging the incontrovertible science regarding contamination of medications and supplements. I hope no one ever has to endure this ordeal. I’m grateful it is finally over.”