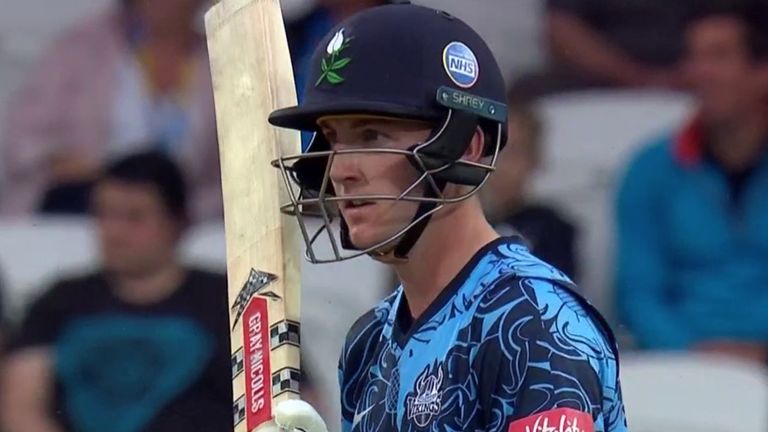 Brook’s average in this season’s Blast stands at a staggering 115.75 from 10 innings after his sixth unbeaten effort entertained the 4,000-strong Emerald Headingley crowd, pushing the Vikings to 180-4. Scorecard: Yorkshire vs Lancashire

The Lightning then responded with a battling 171-8, recovering from 70-4 to require 20 from the last over as Rob Jones (61no) and Steven Croft (41) rallied the visitors.

But New Zealand quick Ferguson claimed three wickets with the last three balls to seal a nine-run success and consign the Lightning to a fifth defeat in 11 games. For Yorkshire, a seventh win in 11 moved them to 15 points – a total widely accepted as the qualification mark. This was their first Roses Blast win since 2017.

The Outlaws made it seven wins from 11 games after brushing aside a Bears side hit by the loss of all-rounder Carlos Brathwaite after a positive COVID test.

The 37-year-old became the first Worcestershire player to take 100 T20 wickets to help his side defend 167-6 which was built around Brett D’Oliveira’s 43 and a score of 37 from 21 balls from Ross Whiteley.

Former England seamer Jade Dernbach took 3-23 on his debut on loan from Surrey but – despite 46 from Tom Wood – Derbyshire collapsed from 123-3 to end on 153-8.

Leicestershire recorded a rain-affected eight-wicket win at Durham as the hosts suffered a second successive defeat in the Vitality Blast. Scorecard: Durham vs Leicestershire

Durham had posted 115-4 from 15.1 overs before rain interrupted their innings, with the Duckwork-Lewis-Stern calculation setting Leicestershire 88 to win from nine overs.

And Josh Inglis and Colin Ackermann took the visitors to victory with nine balls to spare.

Batting first, Sussex openers Luke Wright (77) and Phil Salt (63) shared a first-wicket stand of 144 to propel the visitors to 201-8 a total that was always going to be difficult to chase.

So it proved as Glamorgan were all out for 168 with David Lloyd making 51. Lenham continued his fine Blast form to pick up the man-of-the-match award.

A second defeat in as many days leaves Glamorgan needing a miracle to make the quarter-finals while Sussex remain in the qualification mix.

Adam Milne took a hat-trick off the final three balls to clinch a thrilling 11-run victory for Kent Spitfires over Surrey at Canterbury, smothering the visitors in the death overs to leave them on 180-6, in reply to the Spitfires’ 191-4. Scorecard: Kent vs Surrey

Milne took 4-38 and defended 18 in the final over, bowling Ollie Pope with the fourth delivery and getting Kyle Jamieson caught on the long on boundary with the penultimate ball to clinch an exhilarating win. He then had Laurie Evans caught off the last ball of the innings to seal an astonishing recovery.

Surrey looked heavy favourites when Will Jacks smashed a Blast-best score of 87 from 54 balls, but after putting on 92 for the second wicket with Laurie Evans, who finished on 57, the run rate steadily increased.

Kent’s total was built upon a hefty partnership between Jordan Cox and Jack Leaning, who hit 61 not out and 50 respectively.

Hampshire‘s teenage batting prodigy Tom Prest inspired his side to only their second Vitality Blast win of the season with an unbeaten 59 helping seal an 11-run victory over high-flying Gloucestershire at the Ageas Bowl. Scorecard: Hampshire vs Gloucestershire

The visitors needed 20 from the last over but fell short thanks to some fine death bowling from Chris Wood to secure a morale-boosting success for the bottom-placed Hawks who earlier won the toss and elected to bat.

What an outstanding knock it's been from the youngster as he brings up his maiden half-century with another boundary! 💪💥

📺 Follow the action live at https://t.co/cNkJ7vdkkn or on the free Hampshire Cricket App 📲 pic.twitter.com/8cJsl4V4iA

Prest, who recently scored a triple century in a second XI match, showed maturity above his years in only his third senior appearance after the hosts lost their much-vaunted opening duo of James Vince and D’Arcy Short cheaply once again.

The 18-year-old anchored the innings superbly after the hosts were teetering at 34-3 – his knock setting Hampshire on their way to 176-6.

Gloucestershire replied with 166-5 after an 82-run stand for the third-wicket from Chris Dent and in-form New Zealand international Glenn Phillips.

Somerset maintained their push for a top-four finish in the South Group with a five-run win over Middlesex under the DLS method at Taunton. Scorecard: Somerset vs Middlesex

The hosts were bowled out for 152 in 18.1 overs after losing the toss, crashing from 97-3 at the halfway point. Devon Conway hit 45 and Will Smeed 33, while Blake Cullen picked up 4-32 – including a hat-trick of Lewis Goldsworthy, Ben Green and Marchant de Lange – and Steven Finn 2-16.

Middlesex had replied with 114-6 off 16 overs when rain prevented further play. Nathan Sowter was unbeaten on 37, while Craig Overton claimed 3-28. A seventh defeat in 11 group games ended the visitors’ hopes of reaching the knock-out stage.

Related posts:
July 2, 2021 Lifestyle Comments Off on Harry Brook and Lockie Ferguson inspire Yorkshire to nine-run win over Lancashire in Roses clash
Celebrity News:
What Is Offset's Real Name?
How Did Courteney Cox Meet Boyfriend Johnny McDaid? What Is Their Age Difference?
It Was Love at First Sight When Track Athletes Tara Davis and Hunter Woodhall Met at Age 16
Scooter Braun Officially Files For Divorce From Yael Cohen – & Already Has A Prenup In Place!
OMG! Prince William Is Also Writing a Book After Harry's Memoir News
Recent Posts