This bartender is a hero — and he has the fake receipt to prove it.

Max Gutierrez — who works at a bar in St Petersburg, Florida — is receiving heaps of praise online after he helped rescue a female customer from a “creep” with a clever check trick.

The photo was shared by Twitter user Trinity Allie, and has been liked over 200k times.

“This man was harassing me and my friend and the bartender passed this note to me acting like it was my receipt!” she wrote. “Legit the type of bartender everyone needs.”

The secret note read: “If this guy is bothering you, put your pony tail on your other shoulder, and I will have him removed. He’s giving me the creeps.”

Although Trinity never revealed if her ponytail was moved — the creep definitely was.

“He ended up having to literally yell at the guy he said ‘you need to get tf away from these girls who clearly are not interested’ & the dude said ‘that was a little aggressive’ and he said ‘well ur aggressively hitting on them & you need to leave’.”

After the story went viral, Gutierrez recognized himself in the pic and left Trinity an update in a tweet:

“Hey that’s me! Lol Fun update, the guy I kicked out Sunday night came back to the bar JUST NOW for a beer, told him I wouldn’t serve him.”

Responding to a Reddit post about the incident, he explained further about why he silently stepped in.

“It’s something you just pick up from mentor bartenders,” he said. “Eventually you become pretty good at reading people. body language, etc.”

“This guy was giving off very weird vibes for quite a while, kept an eye on him, try to give him a chance, try to let the girls tell him no and leave it at that, but he didn’t take no for an answer and kept pestering them so eventually I kind of yelled at him and made him leave lol.”

“I honestly don’t like yelling at customers or embarrassing people, but I find it’s one of the best ways to handle creeps. Calling them out in front of people is usually enough to get them to turn tail and walk away. I just don’t need my guests feeling uncomfortable.”

And if the picture looks a little staged, that’s because it was: Trinity clarified she asked Max to pose with the note after they creep left “just to show my appreciation.” 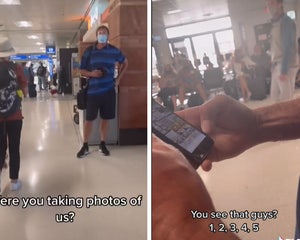