Jonathan Scott and Drew Scott are used to spending a lot of time together.

In addition to their approximately 800 shows—one of which, Property Brothers: Forever Home, is returning for its third season tonight on HGTV, while Celebrity IOU premiered Monday—the twin brothers lived together for years, flipping houses and cohabiting in accommodations that correspondingly grew bigger along with their success. Drew’s longtime girlfriend, Linda Phan, eventually moved right in, too.

Now, Linda and Drew are married and Jonathan is happily dating Zooey Deschanel, so the Canadian brothers are no longer housemates (though their respective guest rooms are always open).

But they’re still used to seeing each other all the time, so now that in-person togetherness has become a non-starter due to the novel coronavirus pandemic, these two peas from the same pod have had to get used to abiding by the rules of social distancing.

“I’m just not sure how the umbilical cord stretches that far,” Drew quipped Monday during a Zoom appearance on The Talk “alongside” Jonathan, who was in the screen right next to him.

The answer is FaceTime, of course, which they use to talk daily, for everything from work meetings to family dinners and game nights with their parents and their older brother, JD Scott, and his wife Annalee. (And those surely don’t get bizarrely competitive at all, even from miles away…)

Happily, all of that brotherly ribbing we’ve come to rely on translates readily to platforms like Instagram Live. 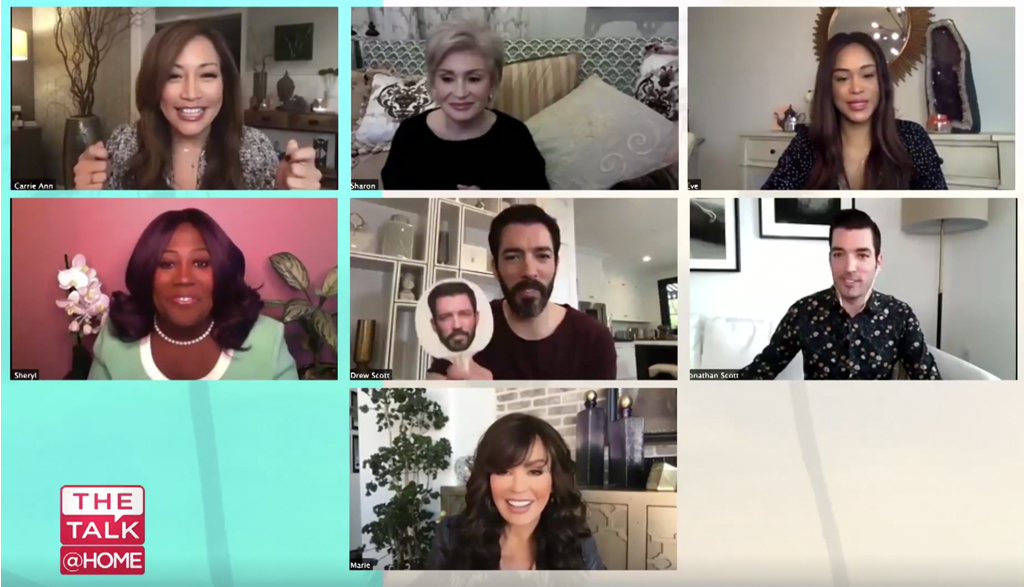 Also on The Talk, featuring all five hosts chatting from home as well, Jonathan and Drew played “Quarantine Questions” and we learned the following:

While both brothers guessed that the other was showering less than he was, they’re each showering every day—though Drew readily admitted he’s going through major grooming withdrawal. (Lucky for him, he’s a product hoarder even in normal times.)

However, Jonathan was all dressed up, while Drew was faking it in a T-shirt and a onesie he happily showed off after they were asked which of them was least likely to be wearing pants.

Jonathan, meanwhile, made the most of that button-down, also sitting down with Access Hollywood from his couch at home that same day. 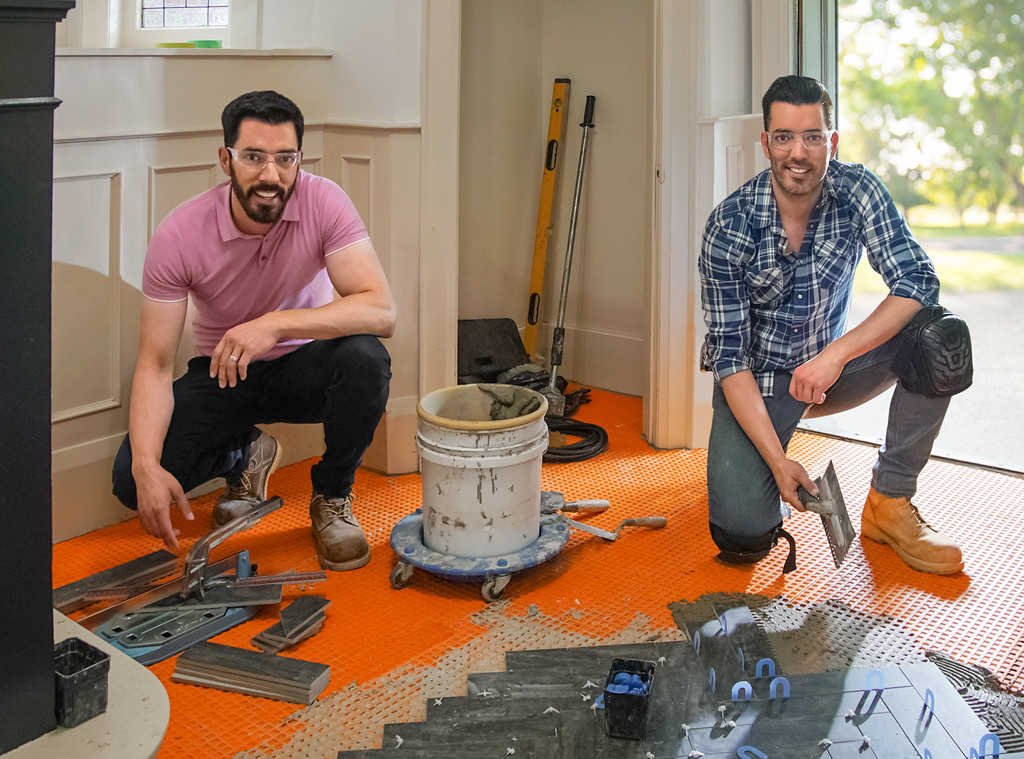 Jonathan talked about his commitment to learning how to play the piano and practicing every day while he has the time—so it’s especially convenient that his girlfriend “plays every instrument imaginable.” The multi-talented singer-actress also, incidentally, colored and cut her boyfriend’s hair, covering up the silver that had fans abuzz when he posted a video a couple of weeks ago encouraging everyone to register to vote.

He’s usually traveling for work constantly, so “now being here and being together all the time has been fantastic,” he said on The Talk. “If I had to pick anyone on the face of the planet to be isolated with, she’s the one—because she’s an amazing cook; she’s a musician, so there’s so much music in this house, she was playing the piano last night and we were singing together.”

Same for Drew, who said it’s been “really great” for him and Linda, who travel together for work because she’s the creative director of Scott Brothers Entertainment, to get to spend more time alone at home for a change. “So it’s like an extended date night,” he said. (Also fitting because they have a podcast called At Home With Linda & Drew Scott—a pre-stay-at-home episode with Jonathan and Zooey will be on April 28.)

Jonathan and Drew also joined their fellow HGTV stars in recording #HomeTogether messages for a group video thanking all of the front-line workers—from doctors to delivery people—who have been toiling away outside their homes during the pandemic.

Don’t let our smiles fool you, we both play to win! How are you spending your time as we all stay #hometogether? @zooeydeschanel and I have been playing games, making music, and of course doing puzzles.

Don’t let our smiles fool you, we both play to win! How are you spending your time as we all stay #hometogether? @zooeydeschanel and I have been playing games, making music, and of course doing puzzles.

“I think we’re just taking it one day at a time here and it’s a crazy thing nobody would have predicted,” Jonathan also told People. “But I’m glad that I’m with somebody that I love, and somebody who’s so talented.”

But quarantine is quarantine, and he and his brother have also been pulling out every trick in their tool box to keep busy—sometimes literally, with Jonathan revealing he pulled apart a few sinks recently because they weren’t draining properly. But otherwise, the clean-shaven Jonathan is doing puzzles and playing Scrabble with Zooey, while Linda and a thickly bearded Drew are working out every morning, practicing mediation and yoga, and recently went “camping” in their living room in lieu of the real thing. (Inspo for a similar staycation can be found in the latest issue of the Scott brothers’ Reveal magazine.)

And while Jonathan is busy with She & Him-style sing-alongs at home, Drew is brushing up on his guitar skills, playing along with their dad, Jim Scott, via FaceTime. 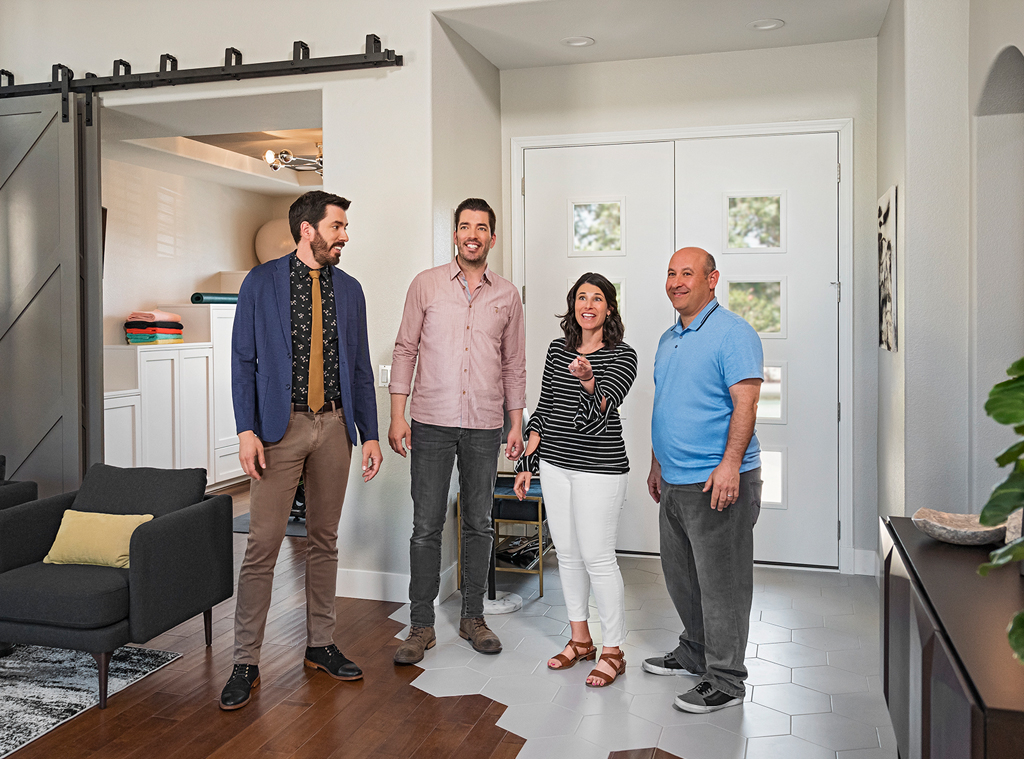 And just like all their fans, Drew and Jonathan are taking solace in their work as the Property Brothers. Production on new episodes may be shut down for now, but there’s plenty of content ready to go that will be rolling out in the coming weeks.

“For us, it’s really important to bring some measure of positivity into people’s lives,” Drew told People. “HGTV has been touted as a safe haven and I think we all need a bit of that in our lives right now.”

Celebrity IOU airs Mondays at 9 p.m., while the third season of Property Brothers: Forever Home premieres Wednesday, April 15, at 8 p.m., all on HGTV.

Related posts:
April 15, 2020 Lifestyle Comments Off on How Drew and Jonathan Scott Are Staying Close as Ever While Apart
Celebrity News:
Are Princess Beatrices recent events a way to distance herself from her father?
Hoda Kotbs absence from Today explained by Savannah Guthrie as well-known subs step in
The Chicks Postpone Shows As Natalie Maines Placed On Vocal Rest
Kim Kardashian Mocked Over Uncomfortable Office Chairs
Gloria Hunniford rushed to hospital after terrifying fall breaks her eye socket
Recent Posts