The Howard government was warned Australia's population could start to shrink because of a plunge in the national fertility rate, undermining the budget and even the defence force but taking pressure off urban centres like Sydney.

Cabinet papers from 2000 released on Friday by the National Archives reveal the government was told the financial pressures facing families including high interest rates and "egalitarian attitudes" amongst women could lead to fewer babies being born. 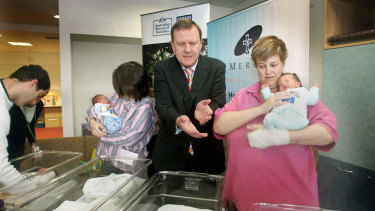 The Howard government was warned in 2000 of a fall in the national fertility rate. A year later, Peter Costello introduced the baby bonus.Credit:Sandy Scheltema

The Immigration Department compiled a wide-ranging report on population issues in late 2000, prompted by concerns about falling fertility which had dropped to a then record-low of 1.75 children per woman that year.

Such a drop in fertility would "lead to a population with an in-built momentum for decline, a declining workforce and a sharper increase in the proportion of the population aged over 65".

"In contrast to the outcomes if the population stabilised at around 24 million, if our fertility rate were to fall much below 1.6 there could be serious economic and public financing implications. This is a plausible possibility," the department warned.

The paper reveals deep concerns about the ageing of the population with fears older Australians would not be enticed to stay in work. The retirement age in 2000 was 65.

Other departments warned it would be difficult to turnaround the number of children being born, particularly if parents faced financial pressures such as increased home loan repayments.

"Higher interest rates, leading to higher mortgage payments, will decrease the disposable income out of which the costs of children can be met, and make children relatively less affordable," it noted.

Another issue was general social attitudes.

At the time, net overseas migration added about 75,000 people a year to the population. But if it was increased to 150,000, Australia would end up with a population of 30 million by 2050 and 35.5 million by the end of the century.

But there were some upsides. The department noted that there were particular concerns in Sydney about population growth and the pressure this was putting on the city.

With the Australian Bureau of Statistics projecting Sydney could have an extra 2 million residents by 2050, the department said the city would face ongoing growth problems.

"Further urban consolidation is physically possible, but will bring its own problems, including greater pressure on existing infrastructure, more traffic congestion and increased run-off," it noted.

Despite warnings about the difficulty of encouraging Australians to have more children, the Howard government introduced its baby bonus policy the following year.

The department's forecasts also proved incorrect. While the fertility rate has fallen to a fresh record low of 1.66, net overseas migration has increased sharply while the expansion of international students and an increase in average lifespans has resulted in the population now standing at 25.7 million.