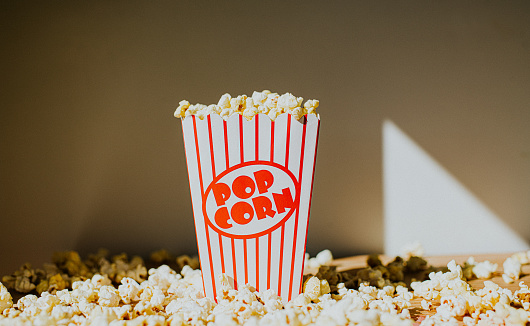 To film fans, there’s nothing like going to the pictures – being in a darkened room with no distractions and surrendering your mind to a story.

To me, it’s an education. A chance to view the world from other people’s perspectives.

The cinema was also my refuge from all the troubles of becoming a teenager, a place where I could go and see old friends and meet new ones.

And it’s something my two kids, Logan, 12 and Talia, nine, should be able to experience as I did when growing up.

With cinemas reopening after lockdown, my family and I wanted to mark the event by watching Godzilla vs. Kong; my wife and I are both huge fans of Godzilla in particular and our children are always up for watching monsters smashing things.

But when we looked for a suitable showing to check out some lizard-on-monkey action at our local Cineworld cinema, which we have always visited, much to our dismay, we couldn’t find one.

My son, Logan, is on the autistic spectrum and an autism-friendly showing, with the volume lowered and the freedom for Logan to move around and be himself would have been ideal – put subtitles on and it would be even better as my partner Lisa is partially deaf in her right ear.

Lisa also has fibromyalgia and being twice turned down for PIP (Personal Independence Payment) has been difficult for both of us because it means I cannot claim Carer’s Allowance despite my role caring for her full time all while juggling my freelance writing work.

We had expected Logan’s autism diagnosis when he was six. Thankfully, Logan has had great help throughout his schooling but while he is certainly fiercely independent, he still needs constant assistance, as does Lisa.

I have loved the cinema all my life, and Lisa is the same; our first date in 2005 was to see Batman Begins, and it used to be nice to take the kids. It was one of the few times where we could bond as a family.

When Logan and Talia were younger, we’d take them to the ‘autism-friendly’ showings. We would try to attend every screening put on, as both of the children loved it and the relaxed rules meant it was easier for the whole family.

The autism-friendly showings we had previously attended were established by the charity, Dimensions. Even then, the screenings were always on a Sunday morning, once a month and, somewhat inevitably, were restricted to showing the latest children’s movie.

When we looked on the Dimensions website recently, there were no screenings that catered to those on the spectrum nearby, and only one film had subtitles; the children’s flick Peter Rabbit 2.

At Logan’s age, used to space battles and superheroes, he has very little interest in the adventures of a cartoon rabbit. Nor does my wife!

I can’t help feeling this is something that alienates and is infantilising to customers with disabilities – why are there not more adult film options available as well as children’s?

Some venues don’t feature autism-friendly screenings at all, resulting in children being left out because of something they cannot control.

In 2019, I was saddened to read about a five-year-old autistic boy and his mother who felt forced to leave a showing of Dumbo after complaints from other patrons because he was jumping up and down.

Being removed led to the child having a full-blown meltdown, something often featured in stories about autism, and which is certainly part of the stigma those on the spectrum face.

There have been a couple of times where Logan has similarly shown his enthusiasm in regular showings, and the idea of the same thing happening to us is terrifying.

In 2018, Dimensions surveyed over 1500 people on the spectrum about going to the cinema and found that 90% would go to the cinema more if there were more autism-friendly opportunities.

But this exclusion is not just a children’s issue. When Lisa and I attended a screening of Jupiter Ascending several years ago, the sound levels were so loud that she had an anxiety attack that started in the cinema.

It continued after we left and grew so intense while she was driving us home we had to pull into a random car park. It took an hour to calm her down.

Lisa and I both suffer from misophonia, which means we are hypersensitive to the normal day to day sounds and certain noises can trigger anxiety and our fight or flight response.

In 2019, actor Hugh Grant spoke out about the loudness of the cinema, saying he found the sound during a screening of the film Joker ‘unendurable,’ and a spokeswoman from the British Tinnitus Association subsequently stated the standard cinema sound level (85 decibels) is five decibels higher they what they believe would be ‘safer’ over a two-three hour period.

The problem is that if you are at a screening, there’s nothing you can do. You can’t ask someone to just turn it down or there may be complaints from other patrons. But if screenings with lower volumes were available, this would make the experience much more pleasant for people with various difficulties.

A higher number of autism-friendly screenings throughout the week would be ideal, as well as similar screenings for adults, not just showing children’s pictures.

More subtitled showings are desperately needed, and really, more of an effort from cinemas to show that disabled customers matter just as much as regular customers – especially those with ‘invisible’ disabilities.

Disabled people want to feel welcome and to see a movie secure in the knowledge that they will not be judged or feel uncomfortable because of who they are.

My family and I certainly feel like cinemas aren’t interested in making sure we can attend safely. I miss the experience a lot but I cannot go solo – I’m a full-time carer and, besides, it doesn’t mean as much if you’re unable to attend with your loved ones.

If Cineworld really want its customers to ‘rediscover the magic of cinema’ it would be a great thing if that invitation included suitable showings for disabled people.