Odysseus had broken up with me a few months before. He ended it to be with my best friend, a Calypso whose family came from Cyprus. The breakup and its attend­ant betrayal occupied my mind for the 45-minute drive to and from university. The drive was even longer at peak hour, but it was my first taste of time alone, time to reflect. My first taste of solitude. 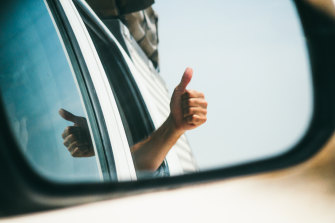 ‘There was no extra light. His robes did not glow. He sat relaxed.’Credit:Stocksy

Clawing at my inadequacy as I did that day, I concluded that Odysseus did not love my robust spirit and he didn’t have the guts to say so. He wimped out, said things would’ve been different if I was a dress size smaller. I was a size 14. Clearly 12 was the only eligible size in town.

But what he said was a metaphor. I didn’t fit into Perth and I didn’t understand why. I was white enough, privileged enough. Hell, I was even non-religious enough to fit in.

Campus life was the throbbing end of the long tail of the ’60s revolution and I was a disciple of the new, as hip and disbelieving as the next person. Jesus and his God were long departed, war was out, conscription gone, social justice the religion. Feminism was in, the pill was in, and marriage was on the way out, even if you were a size 12. And anyhow, I saw size-16 women fit into white satin and Chantilly lace and walk down the aisle. But I digress.

The drive home was not long enough for me to understand that Odysseus believed he was not good enough for my bright, white, non-religious, privileged world. It took me a lifetime to realise that Odysseus from Greece was designed to fit with a person who had also come here from elsewhere, preferably the Mediterranean.

I am not given to visions. For all the barely legal moments in my life, I have never lost my capacity to differentiate between my imagination and this physical world.

But I am given to images. They come in dreams, as I walk down the street, as I speak with friends. And I feel unseen things. I have felt the energy of ancient massacres shimmering above the ground on which I walk. I have stood in rooms of silent people and felt one person’s sadness, wet as the tropics. I have felt ghosts slip in and out of stillness. But I am not given to visions.

Yet on that day, as I drove along the river, pawing at my inadequacy, I saw a vision and, somewhat disappointingly, that vision was of Jesus of Nazareth.

As I blamed Odysseus for not being brave enough to stay with a woman of size, as I screamed at Calypso for being, well, for being herself, there he was, the Nazarene, sitting beside me in folds of white linen, leather sandals on his feet, his elbow hanging out the window, the breeze blowing in his hair.

I did a double take because I had not thought of him for years. I’d been studying the Egyptians, Greeks and Romans, even some of the Hindus. If I was going to imagine any god, it should have been one with an animal head. But it was him, Jesus of Nazareth.

I looked at him. Slowly. To take him in. He was of ordinary size and ordinary demeanour. There was no extra light. His robes did not glow. He sat relaxed, like any other passenger, a bit of company on the way home.

Perhaps his presence quietened my mind, or maybe it was simply his company. Whatever it was, Jesus and I were silent together, a touch of Willie Nelson in the background. And after a while Jesus turned to me and said, “You know, you’re going to be all right.”

Hardly deathless inspiration, but I smiled. He smiled back, an ordinary smile, and was gone. I saw him disappear. And, as twee as it sounds, my smile got wider and deeper and did not leave until I parked the Little Blue Datsun in the garage of our house by the river. And with that smile came a certain contentment.

I would like to say post-vision life has been easy, but it hasn’t. I would like to say I instantly loved my robust nature, but I barely understood it to love it. My friends instinctively knew how to fit in, and they knew that fitting in wasn’t about size, though size was a factor, and it wasn’t about colour, gender, sexuality or wealth. My difference was ineffable. There was no word for it other than robust.

What I can say is, that vision was my first experience of what lies in solitude – visceral glimpses, hints and guesses that clarify as life goes on.

That day I ached to be with someone the way Odysseus and Calypso were with each other. Two people who knew they fitted because they had the same difference. That day I wanted to belong, but I was different. That day, of all the gods, I saw Jesus of Nazareth because I had to remember that when you are different, when you are robust, betrayal and crucifixion are in the air. I needed to remember that after crucifixion comes resurrection, and with resurrection, redemption. And it was the thought of redemption that made me smile.

This article appears in Sunday Life magazine within the Sun-Herald and the Sunday Age on sale March 8.

Related posts:
March 7, 2020 Lifestyle Comments Off on ‘I was not given to visions, but there he was and I knew I would be all right’
Celebrity News:
Birds of a Feathers Lesley Joseph on Pauline Quirke not being on TV
Elon Musk got booed on stage at Dave Chappelles show in San Francisco
Gayle King Defends Prince Harry & Meghan Markle’s Netflix Docuseries!
Taylor Swift vs Olivia Rodrigo! | Perez Hilton
Scott Disick 'Regrets' How He 'Handled' Ill-Fated Relationship With Kourtney Kardashian As He Tries To Move Forward
Recent Posts