On Saturday night, I went on a date with my boyfriend.

We usually spend weekends together despite living in different New York City boroughs, and this one was no exception. I got a glass of ice cold sour beer, and we caught up on our respective work weeks. We laughed a lot and took dumb photos that will never see the light of Instagram.

On Sunday night, I attended a debate watch party with a group of my most politically passionate friends. We dissected the 2020 election, discussed the contrast between Sen. Bernie Sanders and former Vice President Joe Biden, and a handful of us drank a glass or two of wine to unwind. The affair lasted a few hours, as friends popped in and out.

In its retelling, the weekend sounds normal — except I spent the whole time inside of my 400-square-foot apartment alone. The date happened over Apple’s FaceTime; the watch party via remote conferencing app Zoom. Two weeks ago, I lived in a city and worked on the internet. Now I live on the internet too, my friends and family members a revolving set of floating digital heads.

As it sinks in around the United States that the novel coronavirus (COVID-19) will require us to take drastic measures for months — including an indefinite closure of schools, offices, restaurants, bars and theaters as people in nonessential jobs social distance — people have scrambled to cling to a sense of normalcy (and sanity) using technology. The New York Times reported that nearly 600,000 people downloaded Zoom on Sunday alone.

I spoke to people across the country who have initiated virtual book clubs, dance parties, wine nights, double dates and 15-person group hangs.

This is the new normal.

For millennials, Gen Xers and boomers who don’t normally work remotely, the coronavirus outbreak has presented an opportunity to jump on the video-chatting bandwagon that Gen Zers have long been using for work and for play. (Some college students have begun joking that they now attend Zoom University.) And for office-based professionals now trapped at home, they are adapting their social behaviors quickly.

Tyler Chatz, 29, described the last couple weeks as “surreal.” He and his large group of friends, mostly based in Chicago, keep in touch over a group text. After the NBA suspended its season, the text chain exploded.

“People started panicking, talking about what we should be doing. And then the topic shifted to social distancing,” Chatz said. They wanted to avoid getting vulnerable populations sick, so Tyler suggested a group video chat on FaceTime, which they affectionately referred to as a mandatory “all-hands meeting.” 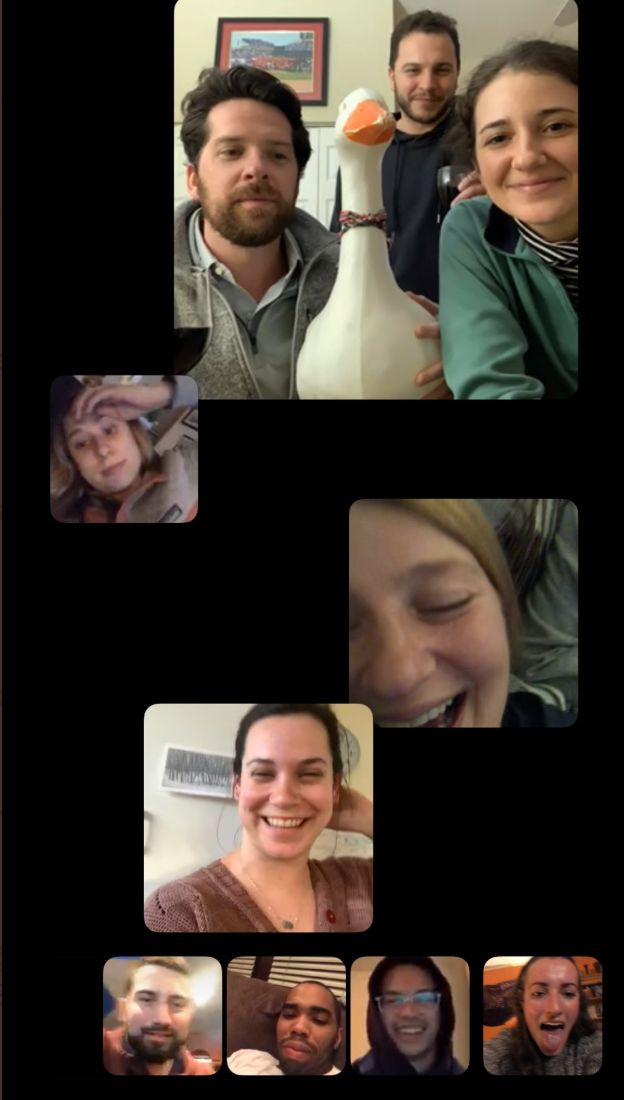 Mike and Sami Jacobson, both 33, were in the middle of their cheese order when they found out the double date that they had been planning with their couple friends was indefinitely postponed. They had already canceled a coveted dinner reservation, and were planning to just have wine and cheese together at an apartment, but by Sunday afternoon it became apparent that even that level of human contact was inadvisable.

So the Jacobsons suggested a digital double date. “We’d been joking about this, but this time was serious,” Mike said.

The two couples then went about creating the date they would have had in person, just over FaceTime at their respective New York City apartments. Each couple made a fancy cheese plate, pulled out wine glasses — the “nice ones that we use when company comes over,” Sami quipped — and popped open a bottle of good wine. They sat at their tables and cheersed screen-to-screen, and really, truly caught up. “It was actually so much fun,” Sami said.

She was also surprised to discover how substantive and special the date felt, even though they weren’t all in the same room. “There’s something about carving out a time so it feels like a proper date or a proper hangout where you don’t have other distractions,” Sami said. “You can really focus on the people you are trying to catch up with.” They planned another double date — this time with their Los Angeles-based friends — soon after.

For Gwen Schroeder, 40, the idea that video would help keep people together during social distancing felt like a given. She has worked in video production for a decade and more recently has been telecommuting. So when someone in her Brooklyn mom’s group joked that they should have a dance party, she took the idea and ran with it.

She set up a Zoom link and a digital flyer to get the word out, and on Saturday at 7:30 p.m. they turned on music and prepared to party. Right away, about 10 other friends joined the Zoom, and at its peak, there were 40 different streams dialed in. Schroeder and her toddler daughter had a blast.

“I haven’t felt that happy in awhile,” she said. “Everything from my work is really bad right now. And I just forgot about it for a solid hour.”

She paused for a second, and then added: “Why did we wait for a pandemic to get on Zoom and hang out with each other?” 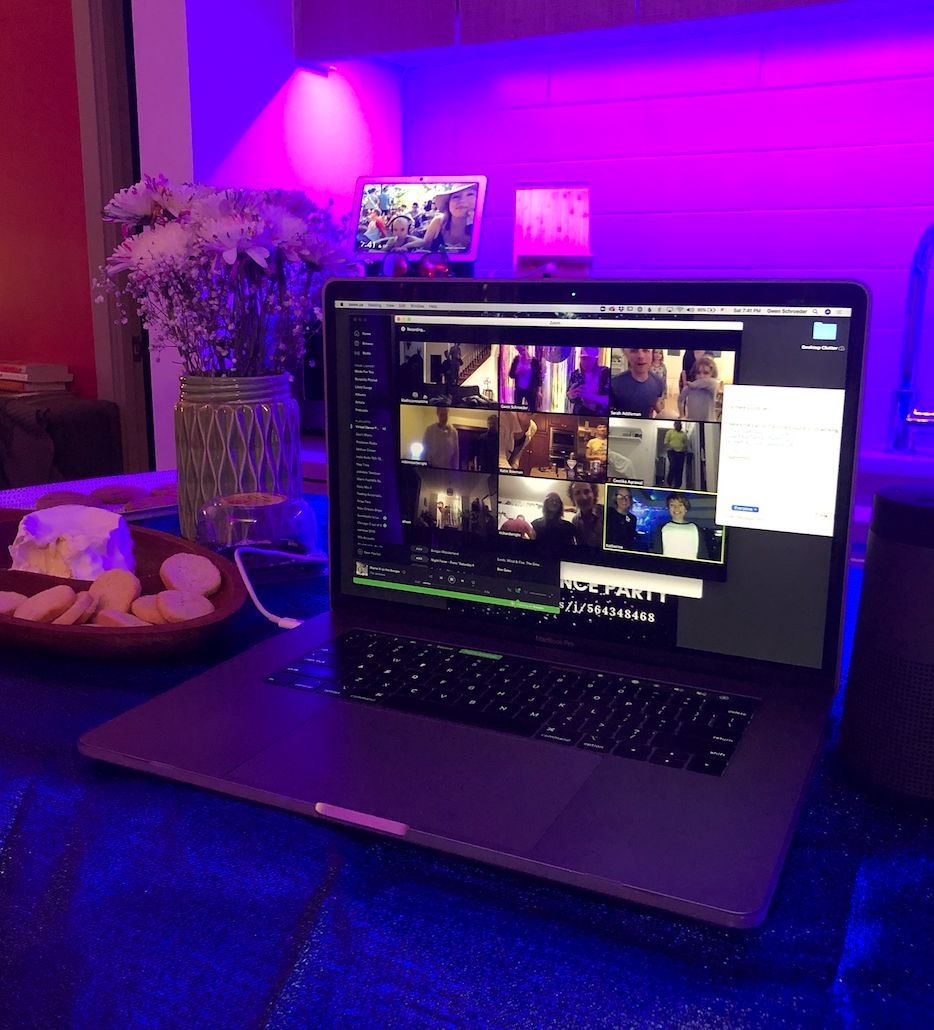 Given that much of our lives already happens online — our banking, our work, our daily communication, our leisure time, our shopping — it’s unsurprising that people would turn to digital tech for solutions and comfort during a deeply uncertain time.

Dr. David Spiegel, Willson professor and associate chair of psychiatry at Stanford University, says that we should lean in to the technology that is available to us, because social contact is essential to our health, both mentally and physically.

“Virtual is not the same but I am convinced it’s better than nothing,” he said. “One of the most difficult things about this [pandemic] is that the things that normally sustain us through very stressful times — social connections — are not only removed, but the people we care about could become a threat.”

And in the absence of the daily structures that most of us are used to, Spiegel says pre-planned Zoom hangouts can provide that social structure. “If you have to plan something, it’s sort of like going to dinner,” he said. “Without that structure it makes you feel at very loose ends.”

Spiegel is feeling the social separation firsthand, since he is in the at-risk age bracket and cannot see his grandchildren in person during social distancing. But he has been able to see them as well as some of his friends over video, and he said that he “found it remarkably sustaining and uplifting.”

As the CDC has recommended canceling all events that involve gathering more than 50 people together for at least eight weeks, digital platforms have also provided a way to create a stand-in for larger-scale celebrations that had to be canceled or postponed.

Alex Sangeorge, who turns 32 this week, was supposed to celebrate his birthday with a long weekend in Mexico City. The trip got canceled due to coronavirus, and his work quickly moved from an office in Manhattan to Zoom. So this weekend, he’ll be throwing himself a virtual happy hour birthday party on Zoom or Google Hangouts — batched cocktails and all.

Ruti Wajnberg, 35, also had big plans for this weekend to throw her younger sister a bridal shower in New Jersey. The couple’s wedding was supposed to be in May, but has now been postponed due to the pandemic. This made Ruti even more determined to make the bridal shower happen and help her sister and her fiancé “feel special in any way possible.”

“Our family is Jewish and our parents immigrated from Poland in their 20s; [my sister’s fiancé’s] family are immigrants from Greece,” Wajnberg said. “Both factions are loud, fun-loving and have huge, hilarious families. There were 60 people invited to the shower, most of whom will try to join virtually.”

The party will include a series of activities, including origami flower-making, toasts, performances and a quiz specific to her sister. They plan to wrap up with a remote Greek circle-dancing lesson.

Many of the people I spoke to wondered if they might use Zoom and Google Hangouts to sustain relationships with people even when the world isn’t on pause in order to slow the rapid spread of the virus.

Elisa Davis, 34, used Zoom last weekend to catch up with a group of childhood friends from her Maryland summer camp. “We usually just text each other and it was really really nice to see everybody’s face,” she said. “It felt nice that everyone had devoted time for it. It wasn’t texting while doing seven other things.”

The group is spread out across the country from Baltimore and New York City to Austin and Washington, D.C., and has talked about keeping the Zoom chats going every week.

Halfway through his double date, Jacobson wondered why they didn’t do this kind of thing more often. Perhaps this would open doors to new ways to sustain relationships with people, especially those who live far away.

“It kind of changed my perspective on catch-ups with people,” he said.

Though the ability to video chat is providing socially isolated people a virtual lifeline, even the most enthusiastic users expressed hope that they’d be able to see their loved ones IRL soon — and wondered whether the novelty of Zoom chats might quickly wane.

“It’s a double-edged sword,” said Schroeder. “Social media is gonna make you crazy but also help you stay alive.” (As a friend and former colleague pointed out to me, they did not have video chat during the 1918 influenza outbreak.)

Regardless of whether it’s a totally satisfactory replacement for in-person get togethers, Spiegel said that we should be taking advantage of the technology that’s available to us. After all, it’s the best avenue we’ve got to sustain the social connections that make life worth living in the first place.

“We might as well make use of the tech we have to make up for what’s missing,” he said. “It isn’t the same but one of the good things about humans is that we’ve got imagination.”