Inside Chatsworth House, England’s answer to the Palace of Versailles (and it stood in as Mr Darcy’s mansion in the hit film Pride And Prejudice)

The notice reads: ‘Please do not kiss’. It’s a polite reminder not to snog the handsome face in front of me. I’m in the gift shop at Chatsworth and, alas, this is merely a bust of the actor Matthew Macfadyen, aka Mr Darcy: plaster, not flesh and blood.

The Darcy connection is one of the reasons some 600,000 people visit Chatsworth, the palatial Derbyshire seat of the Duke and Duchess of Devonshire, each year.

Macfadyen starred with Keira Knightley in the 2005 hit film of Jane Austen’s Pride And Prejudice, and the mansion stood in for Darcy’s grand family seat, Pemberley. 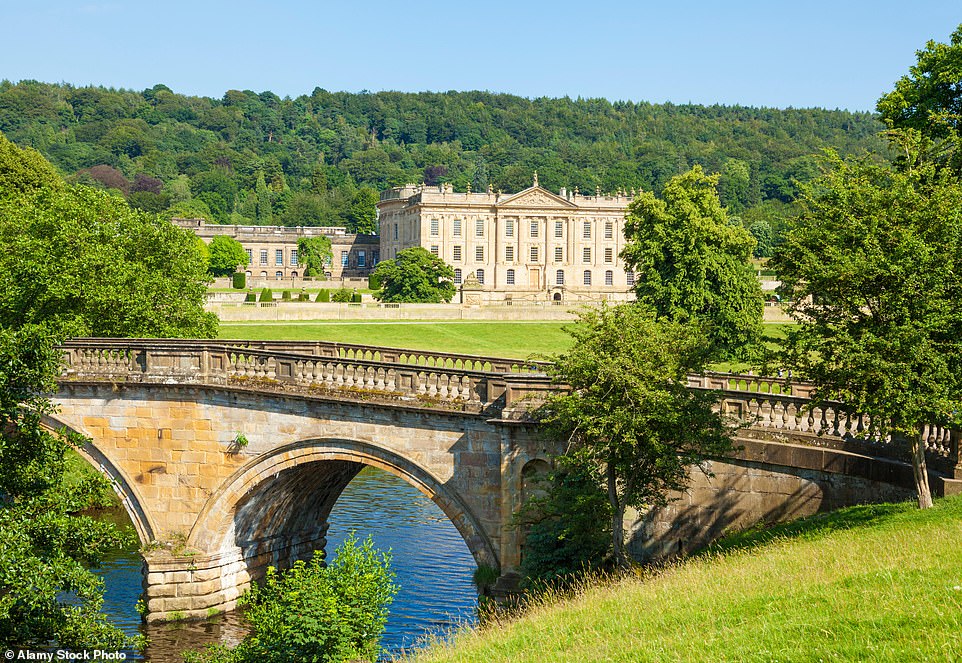 Inspiring: Deirdre Fernand explores Chatsworth House, the ‘palatial’ Derbyshire seat of the Duke and Duchess of Devonshire. After a visit to the Palace of Versailles, the first duke demolished his Elizabethan pile, and employed the greatest architects and craftsmen to create shock and awe, she reveals

Hollywood has always loved this particular corner of England; Tom Cruise is just the latest celebrity to declare his passion for the county.

In the autumn sunshine, the baroque facade of the 17th-century house sparkles. No wonder it’s often compared to Versailles. After a visit to the French court, the first duke demolished his Elizabethan pile, and employed the greatest architects and craftsmen to create shock and awe.

‘The house was built to show off,’ as the current Duke of Devonshire, Peregrine Cavendish, has put it. 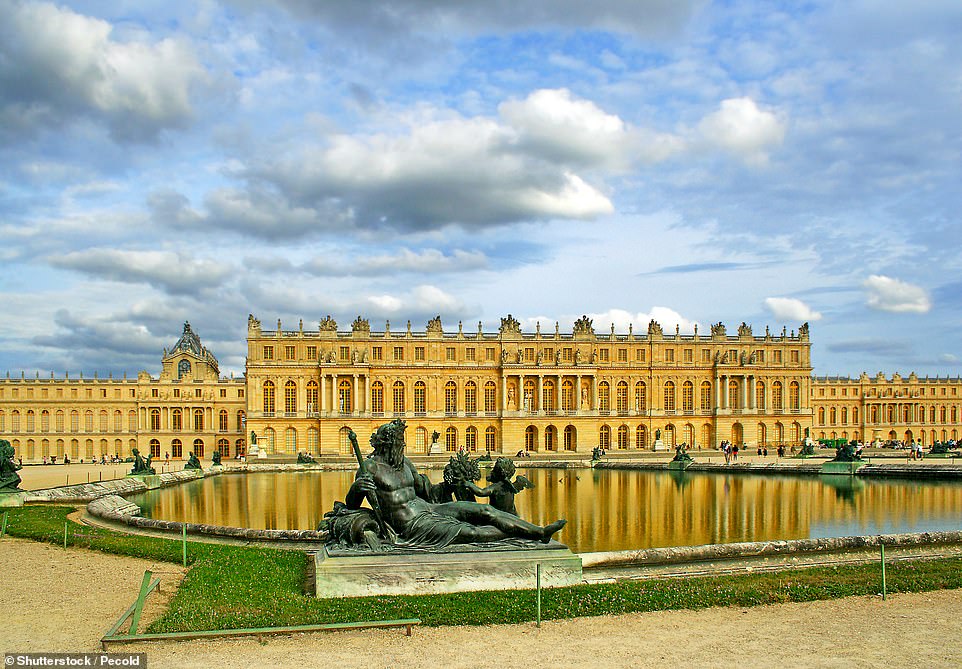 His friend King Charles has often stayed — although he must find Buckingham Palace a little poky on his return.

My own visit is prompted by another heart-throb, the late painter Lucian Freud, who is the subject of a new exhibition opening this week at London’s National Gallery: Lucian Freud, New Perspectives.

With his dark, brooding looks, Freud was the Mr Darcy of the art world. A serial seducer, his rackety love life (he had 14 acknowledged children with six women) always threatened to overshadow his artistic achievements.

A friend of the Devonshires, Freud visited Chatsworth for the first time in 1959, enjoying a close relationship with the family until his death in 2011.

The mansion (pictured) stood in for Mr Darcy’s grand family seat, Pemberley, in the 2005 hit film adaptation of Jane Austen’s Pride And Prejudice. Above is Keira Knightley starring as Elizabeth Bennet and Matthew Macfadyen as Darcy in the film 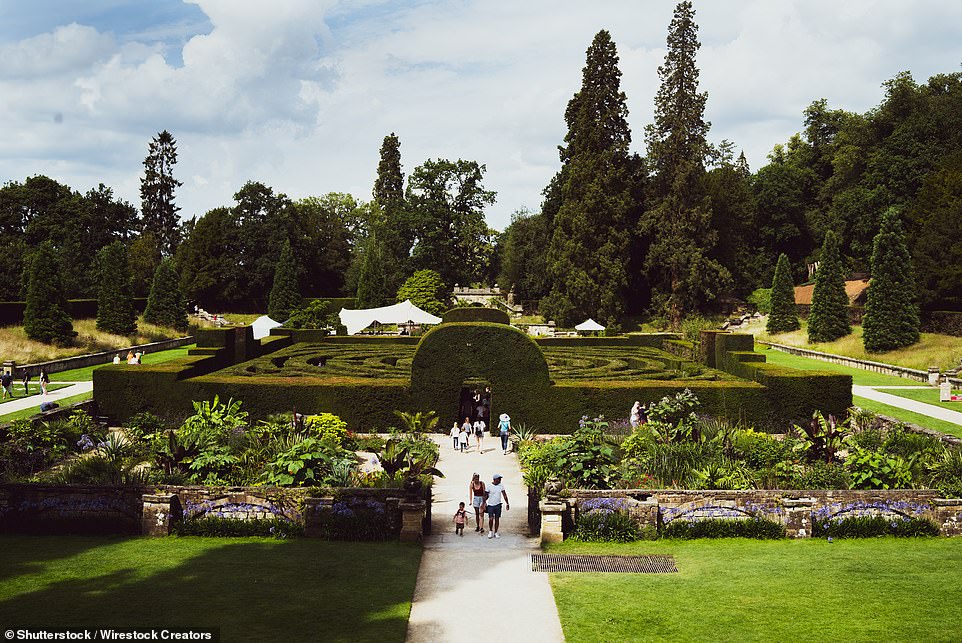 Above are the estate’s gardens. ‘The house was built to show off,’ according to the current Duke of Devonshire, Peregrine Cavendish 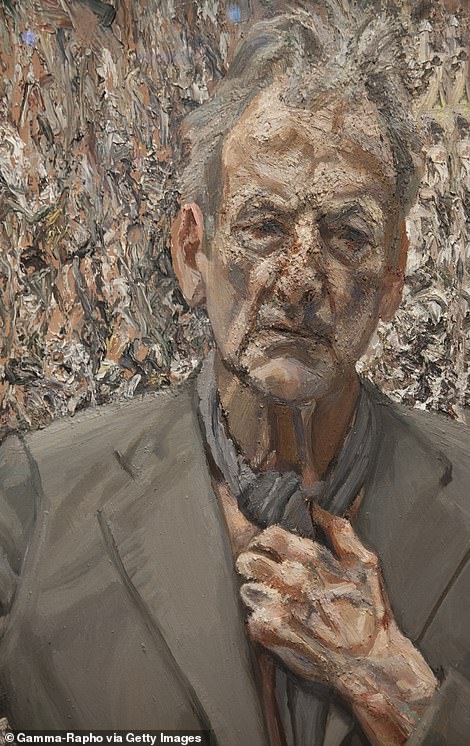 One of Lucian Freud’s final self-portraits. The artist visited Chatsworth for the first time in 1959

Ascend the grand staircase to a picture-lined corridor, and you will come face to face with Deborah Mitford, the 11th Duchess, dressed in a plain, white shirt. When Freud painted her portrait in 1957, it was derided as crude and unflattering — as was his 2001 portrait of the late Queen.

Yet tastes change: more than 60 of his portraits will be shown in this landmark exhibition to mark the centenary of his birth.

I’m keen to discover more about Chatsworth. Not being a friend of the Duke, I must check into one of his hotels, The Cavendish, on the edge of his estate.

It’s my Art Break Hotel, and it’s perfect. For the next few days, my husband and I drive nowhere, just donning walking boots to wander around the 1,000-acre park.

We scale a ridge to the Hunting Tower, the only original part of the Elizabethan house left, to survey the views across the Derwent valley. Another sortie takes us to Edensor, the village that an earlier duke demolished and rebuilt on a more picturesque site.

On foot, with sandwiches in our rucksacks, we find a real tranquillity. Away from the hubbub of the house and its visitors, there is solitude: the wooded trails into the forest are surprisingly empty.

That evening we dine on tasty Chatsworth lamb at the Devonshire Arms, Pilsley, one of two local pubs owned by His Grace.

A couple at the next table tell us they visit twice a year without fail: once to walk in the surrounding Peak District and again to see the house decked out for Christmas. 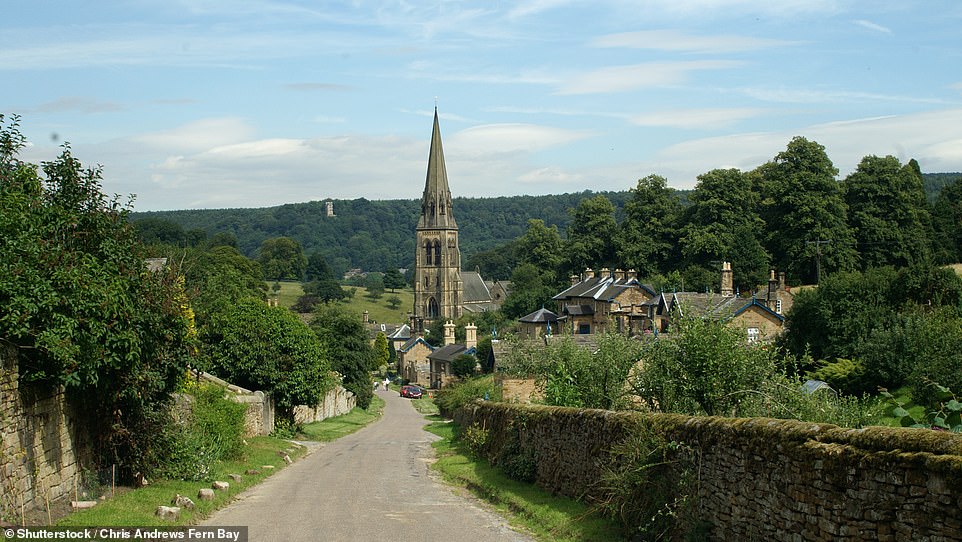 Deirdre goes on an outing to the village of  Edensor (pictured), which was previously demolished and rebuilt on a ‘more picturesque’ site 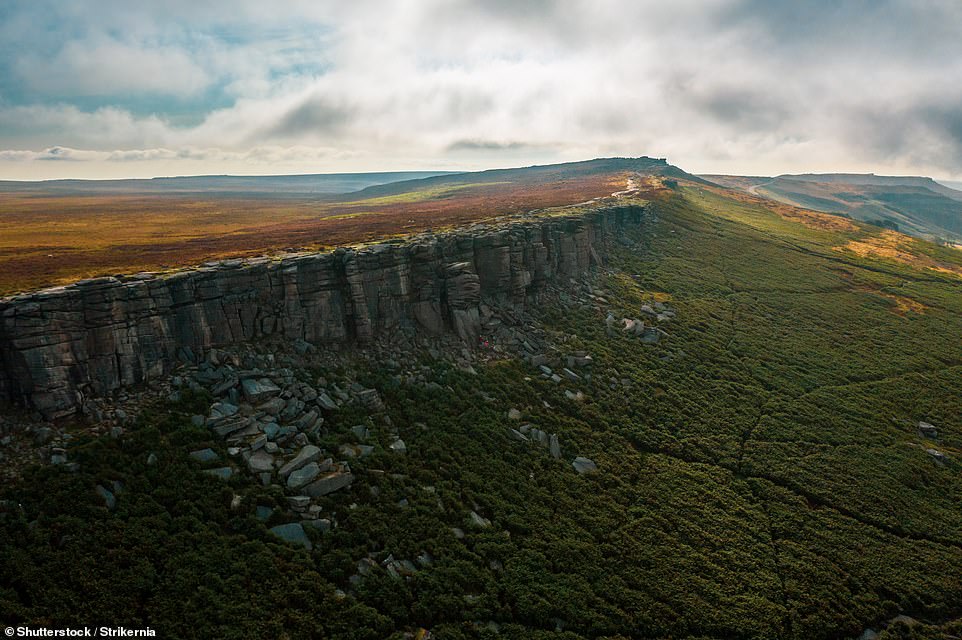 On a tour of Stanage Edge (pictured), a four-mile outcrop of gritstone, Deirdre spies ‘Keira Knightley Rock’ – a crag that appears in Pride And Prejudice

The days are whizzing by and I have barely left the estate. I have to prise myself away from His Grace’s art collection, his pleasure gardens of maze and rockery — not to mention his farm shop, with its addictive cream-laden scones.

Besides, I have an appointment with a guide, Tom, who has promised to show me the moors.

On a blowy afternoon, we drive up high above the village of Hathersage to explore Stanage Edge, a four-mile outcrop of gritstone. Along the way, I learn about three types of heather, peatbog conservation and the mating habits of the ring ouzel, a rare member of the thrush family.

What more erudition is in store? ‘And this,’ he gestures, as we edge towards a precipice, ‘is Keira Knightley Rock’.

In a key scene from Pride And Prejudice, the actress lingers on top of the crag, brooding over her fate. So many tourists come looking for the spot, he explains, that the locals have long given up calling it anything else.

On top of the rock, I breathe deeply. I want to bottle that clean air and take it home as a reminder of my stay.

I could always buy a tea towel from the gift shop. Better still, I could purchase my own bust of Mr Darcy, a snip at £75. Then I could kiss him as much as I liked.