Reason to celebrate! James Kennedy marked nine months of sobriety recently and honored the important occasion by taking a trip to Disneyland with his girlfriend, Raquel Leviss.

During the duo’s jaunt to the California theme park, they went on plenty of rides and even ate a sweet treat shaped like Mickey Mouse on Saturday, March 7, in celebration of 27-year-old Kennedy’s achievement. “Happy 9 months,” Leviss, 25, wrote alongside an Instagram Story of the chocolate-covered dessert. 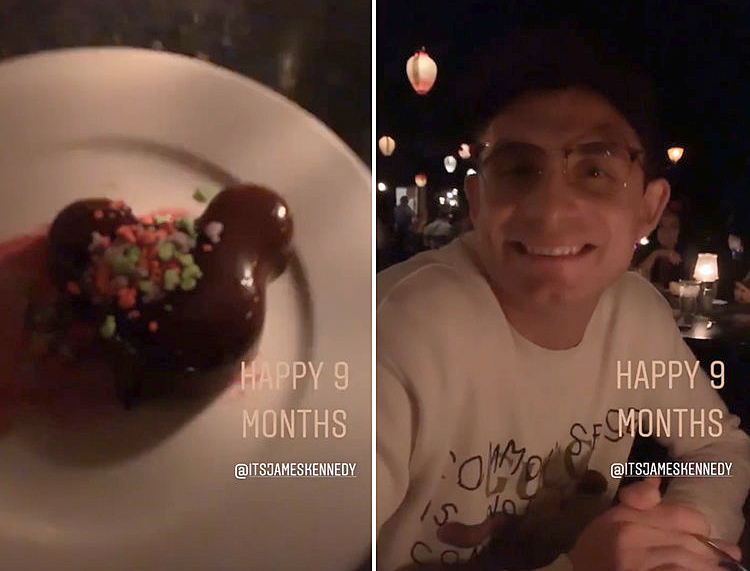 The Vanderpump Rules cast member also uttered the same encouraging phrase in the Instagram clip and shared a look at Kennedy, who grinned broadly in response to the mouse-themed confection. “Thank you,” the DJ replied.

In a separate Instagram post shared on Sunday, March 8, Leviss opened up a bit more about the pair’s recent Disneyland visit. “We indulged in this Mickey pretzel and cheese as we waiting for the Magic Happens Parade last night,” she captioned a snapshot of herself holding the Mickey-shaped snack.

Kennedy’s sobriety was addressed on the Pump Rules episode that aired on Tuesday, March 3, in which the Brit rage texted Leviss after she had gone out with friends.

For his part, Kennedy opened up about his sobriety during an appearance on Watch What Happens Live With Andy Cohen on March 3, and said that his decision to quit drinking stemmed largely from the argument with the former beauty queen. “I’m going on nine months sober. I haven’t had a drink in nearly nine months and I just feel completely different,” he told host Andy Cohen. “I’ve really taken hold of my life and [am] trying to change it for the better and change our relationship for the better.”

Added the Bravo personality, “I know that I should be doing this for me, but I’m also doing it for my relationship with Raquel.”

Kennedy shared an Instagram photo with Cohen, 51, from his WWHL visit and captioned it, “Coming on to 9 months sober and it feels so good! Thanks for having me tonight @bravowwhl @bravoandy.”

Leviss left a loving reply in the comments, writing: “IM SO PROUD OF MY BOYFRIEND!! I can shout it from a rooftop! I love you!”