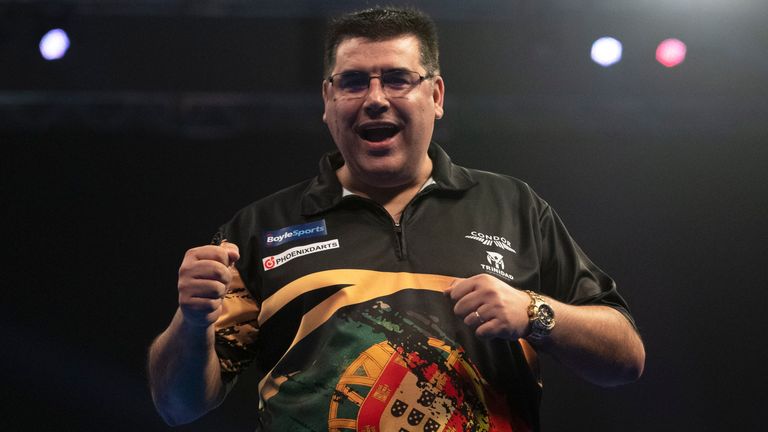 Move over Jose Mourinho, there is a new Special One in town. Or should that be special 501, special 121 or even special double one?

Perhaps for Portugal’s Jose De Sousa, ‘The Special One’ will do just fine after his history-making victory at the Grand Slam of Darts over James Wade saw him become the first man from the Iberian peninsula to win a PDC major title.

A little over a year on from giving up life as a carpenter and kitchen fitter, he joins an illustrious list to win the Grand Slam and the magnitude of the moment was not lost on the 46-year-old.

“I cannot explain it. It’s a dream come true. I’m so happy for my family, my friends, Mr Mac Elkin. It’s a great day for me. When I finished that, I knew I was going to cry – so much work behind me.

“It was a big change in my life. Five years ago I was on my sofa in my home and I saw all of these guys playing on the television and I wish maybe someday I can play with all these guys.

“They are all wonderful players and today, look at me – to win the Grand Slam – it’s a dream come true. It’s amazing.” 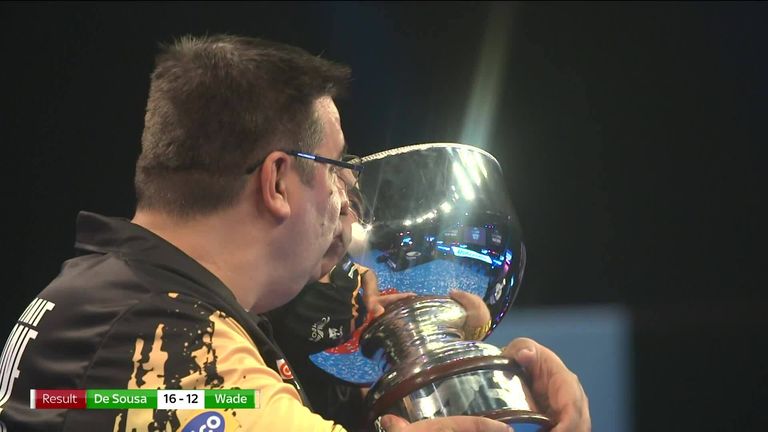 De Sousa capped what he described as ‘the greatest moment of my life’ with a brilliant 158 finish, a fitting conclusion to a week that has seen him showcase explosive scoring, spectacular finishing and some erratic counting.

The Portuguese sensation can send social media into a frenzy on any given weekend on the Pro and European Tours with his unique way of finishing. Busting three-figure scores is not an unusual occurrence as he showed when taking out 138 against Simon Whitlock in the semi-final.

The only problem was he needed 126. 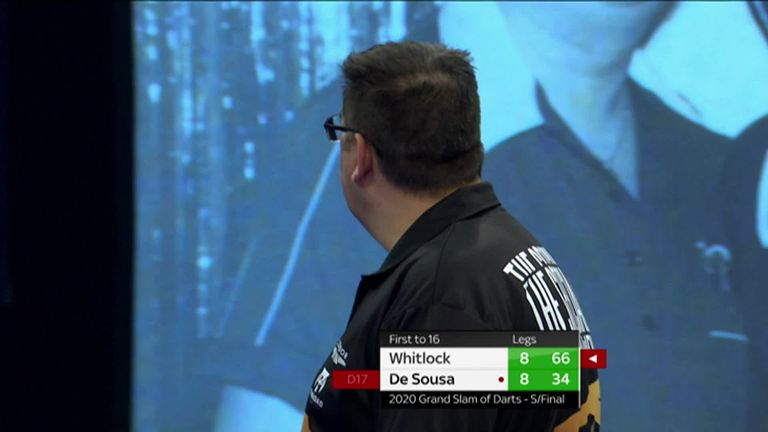 De Sousa’s 16-12 victory at the Grand Slam of Darts came just a couple of months on from his victory over Michael van Gerwen to win the European Grand Prix, and weeks after he fired his first televised nine-dart finish at the European Championship.

It’s the culmination of a story that started when he played soft-tip darts in his homeland, with the same boss who has supported him throughout his journey. De Sousa won more than 50 of the soft tip tournaments he entered. “I cannot explain it. It’s a dream come true. I’m so happy for my family, my friends, it’s a great day for me.

When I finished that, I knew I was going to cry – so much work behind me,”

Whether it is MVG in the European Grand Prix final or Wade in the Grand Slam final, De Sousa has risen to the challenge. His title success in Coventry means he is the first player to win the tournament after losing a group-stage match.

Perhaps it is the success on the soft-tip board that explains his love of the unorthodox – the targets are bigger and the dart is able to hang in the board. That winning record may also explain why he looks so unfazed in finals.

Success took him to Spain where he would meet his wife and Madrid, where he now calls home, and where he won his place at his first World Championship in 2012.

The smile, the shirt, the fist pump, ladies and gentlemen your Grand Slam of Darts champion

De Sousa came through the Western European qualifier to become the first Portuguese player to qualify for either the BDO or the PDC World Championship.

He was beaten by Devon Petersen in the preliminary round, and in a sign of how the game has grown, both men will enter this year’s Worlds at the second round having climbed into the top 32 before the final event of the season, the Players Championship, which starts on Friday.

It’s been coming too. Since gaining his Tour Card in January 2019 he has gone from strength to strength and he is playing as well as anyone at the moment. A regular in the later stages of the Pro Tour, he has four titles to his name including one of the biggest.

All of them have spoken of spurring each other on, and for De Sousa there is one thing that burns brighter than anything, a genuine love for the game.

His infectious laugh and a beaming smile are always evident. Never more so than when he gave Sky Sports a guided tour of his Madrid home during a Zoom chat during the Home Tour earlier this year.

But underneath it all is a desire to be the best, and for a man who was working hard fitting kitchens just over a year ago, there is no let-up when it comes to the hard yards.

Jose de Sousa shows us how it's done… pic.twitter.com/TYspEEFRND

“It’s a lot of work. I work so much – six, seven hours a day, every day and we see that,” he continued after lifting the Eric Bristow Trophy.

“Last year I stopped working. I have a lovely relationship with my ex-boss, he is a lovely guy.

“I came here because I wanted to take the PDC seriously, like the professional I am. This is the result of my work. I am very proud of myself. It’s amazing for me, it’s an amazing year.”

In a week that saw each of the world’s top six fail to reach the semi-final, De Sousa is the sport’s latest new champion and the latest example of PDC chairman Barry Hearn’s mantra that the rewards are there for those prepared to work hard enough.

Having headed to the Grand Slam just outside the world’s top 32, his performance In Coventry sees him move into the top 16 just in time for the World Championships,

A fourth appearance at Alexandra Palace beckons, and few would bet against him going deep in the tournament despite three previous appearances yielding not a single victory.

The Worlds are coming…..

The PDC World Darts Championship is on after the news on Monday that Alexandra Palace would host the event, and that the PDC has begun talks with the venue with the hope of fans being able to attend, in line with the latest UK government advice.

The 96-player field will be confirmed next Monday after the Tour Card holders qualifier and the conclusion of the regular season at the Players Championship Finals this weekend. The draw will take place on Sky Sports News on Thursday December 3.

Related posts:
November 25, 2020 Lifestyle Comments Off on Jose De Sousa became the PDC’s newest major champion with Grand Slam of Darts glory
Celebrity News:
Chrissy Teigen Just Took 1 of Julia Child's Most Famous Dishes to Another Level
New York Dolls Guitarist Sylvain Sylvain Dead At 69
Jordyn Woods Seeks Prayers for BF Karl-Anthony Towns Amid COVID Diagnosis
Khloé Kardashian Needs to Break Up With FaceTune — Especially When She Isn't Using It On Her Face
The Real Reason Trump Met With MyPillow Guy Mike Lindell Again
Recent Posts
This website uses cookies to improve your user experience and to provide you with advertisements that are relevant to your interests. By continuing to browse the site you are agreeing to our use of cookies.Ok