Back in August 2019, Katie Holmes’s outfit of the day went totally viral. Who can forget the matching cashmere bra and sweater set she was photographed wearing while going about her day in New York City?

It was pure luxury, but the look also had a cool sexiness thanks to the way the slouchy sweater hung off of her shoulder. The internet went wild for it—but given how private Holmes is, we thought we’d never learn what she was thinking when she got dressed that morning. Thanks to a new interview with InStyle to promote her new film The Secret: Dare to Dream, we finally have some answers to all our burning cashmere-bra questions.

When asked about the fashion moment she’s having right now, Holmes jokingly told the magazine, “I have been in this business for quite some time. We both know you have ups and downs. It's been a really exciting time because of the cashmere bra.” 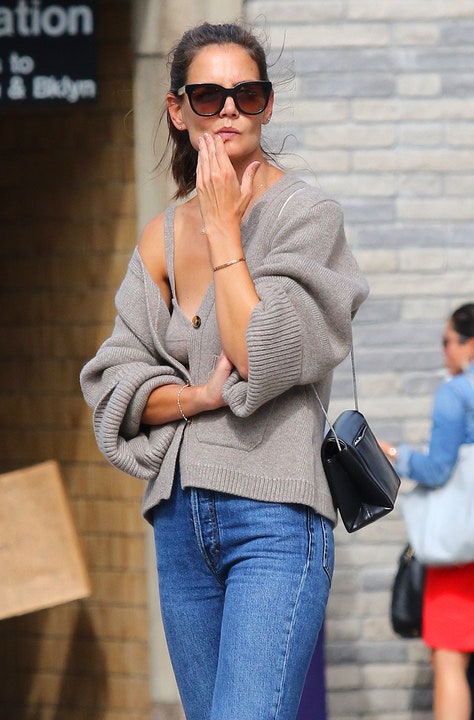 But when pushed further as to why she chose that $520 Khaite bra and $1,540 sweater combo (which sold out quickly after she wore it), Holmes had a pretty relatable response. “Honestly, I wasn’t feeling so sexy. And I saw that and was like, Sexy. I can do that! I thought it would be good if I was in a cabin sitting by the fire and wore the [matching] sweater over it,” she said. “That’s how my brain works. But then I was like, Oh, wait, I'm not in a cabin, and I'm not going to a cabin. I still thought I could pull it off, though. I had noticed other people wearing bras with blazers.”

As for the perfect positioning of the sweater? We can blame Katie Holmes’s daughter, Suri, for that. “I didn’t want to get into trouble with my teenager! We were school shopping, and I was just trying to hail a cab on Sixth Avenue,” she said, laughing. ”It looked way more glamorous than it was.”

Can’t wait for your next viral fashion moment, KH!