Do YOU want to sound more posh? Language expert reveals how to perfect the Queen’s English by using phrases from The Crown

Humans make snap judgments on other people’s accents in as few as seven words – and favour those we perceive to be ‘posh’ or ‘high class’, says a recent study.

And if you’re looking to make an good impression by cultivated a more refined accent, there’s no better place to look than the royal family.,

Language expert Claire Larkin told Femail: ‘Even today, important figures from across society – particularly the royals – use British Received Pronunciation, and it’s still regarded by many as the “proper” way of speaking, and a marker of prestige and ability.’

But regardless of where you’re from, Babbel cultural expert Claire has revealed exactly how to fool people into thinking your’re posh – using phrases from hit Netflix drama The Crown.

She defines a posh accent as having three elements: clear pronunciation of the letter H at the beginning of words such as ‘hat’ and ‘hamper’, making the R inaudible in words such as ‘car’ and ‘heart’ and long vowels, which require an incredibly high palate.

Here, FEMAIL reveals the best quotes from The Crown to extend your vowels and skip certain inaudible letters in words, so you can trick strangers and colleagues into thinking you’re practically royal.

‘Who we are is not what we wear or what glitters. It’s the spirit that defines us’

Claire said: ‘This line from Philip Mountbatten, Duke of Edinburgh, won’t just help you mimic the pride that comes with royal duty.

‘It’s a sentence to use when practicing your long vowels, and skipping your ‘r’s.’ 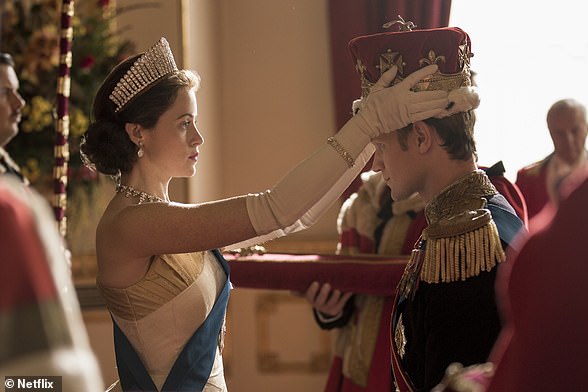 ‘Monarchy is God’s sacred mission to grace and dignify the earth. To give ordinary people an ideal to strive towards, an example of nobility and duty to raise them in their wretched lives. Monarchy is a calling from God.’

Claire said: ‘We all know that half of being ‘posh’ stems from your attitude.

‘To really wrap your head around the Royal attitude, try practicing your Queen’s English by mimicking this line from Queen Mary.

‘One thing that you will have to wrap your head around when impersonating a royal is their sense of duty and obligation towards their life-affirming role.

‘This quote, from Queen Mary, should help you to channel a royal mindset, and will help you practice skipping the “r” sounds in words like monarchy.’ 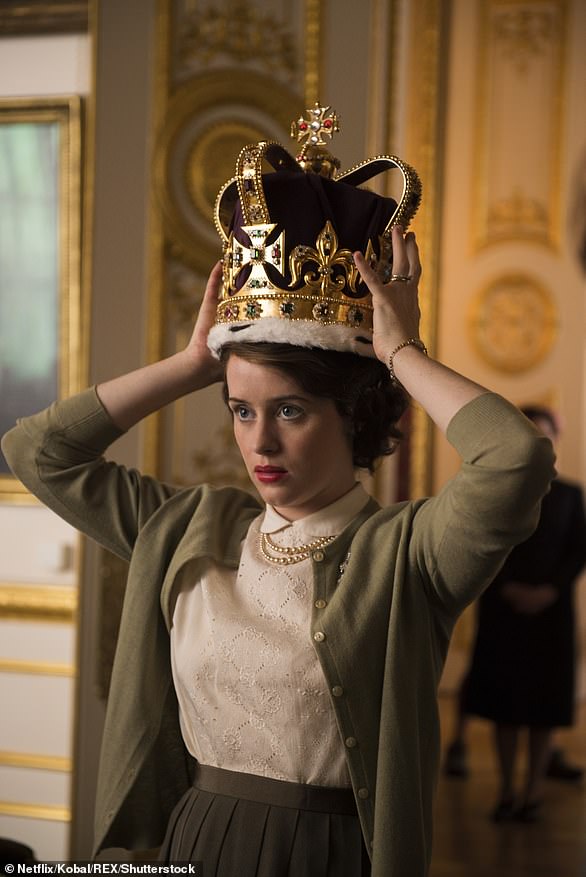 Claire Foy is pictured as Queen Elizabeth II preparing to take over the monarchy from her father George VI in Season 1, Episode 4 – ‘Act of God’

‘He hasn’t found happiness… He’s found marriage – the very opposite of happiness’.

Claire said: ‘This is the perfect phrase, delivered with great sarcasm by Antony Armstrong-Jones, for practicing using hard ‘H’s at the beginning of words.

‘It also gives a taste of the slightly stiff, pragmatic way in which the aristocracy once approached marriage.’ 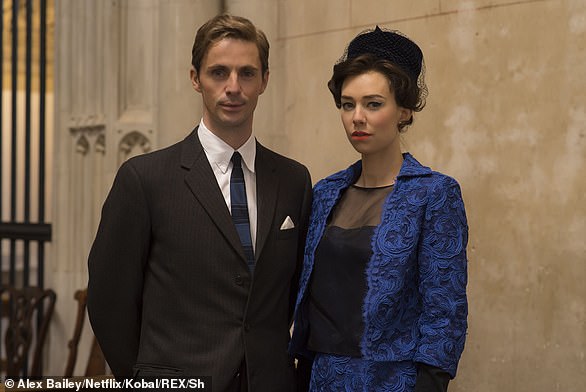 ‘When is it, do you think, if one’s committed to a life of honesty, that one must start calling oneself ‘middle-aged’?’

Claire said: This phrase from Queen Elizabeth is a fine example of how ‘one’ should be used.

‘One’ is a pronoun used to refer to the self, particularly in posh circles, and is also another opportunity to practice your long vowels.’ 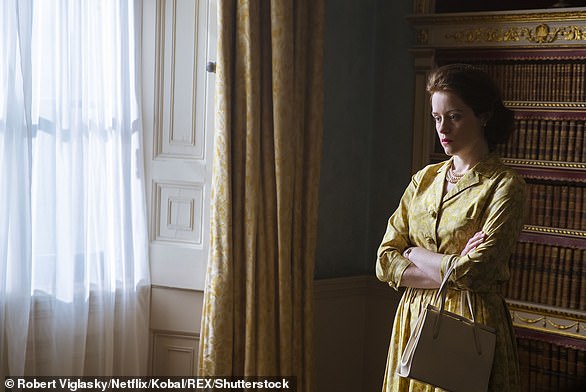 ‘The pusillanimity and vindictiveness knows no limits. Seventeen years have elapsed since the abdication. Shouldn’t bygones be bygones?’

Claire said: ‘The British aristocracy is known for pursuing a ‘proper’ education, so using elaborate words is another way to practice your BRP.

‘This quote – from David Windsor – allows you to do just that, along with practicing a royal buzzword: abdication.’ 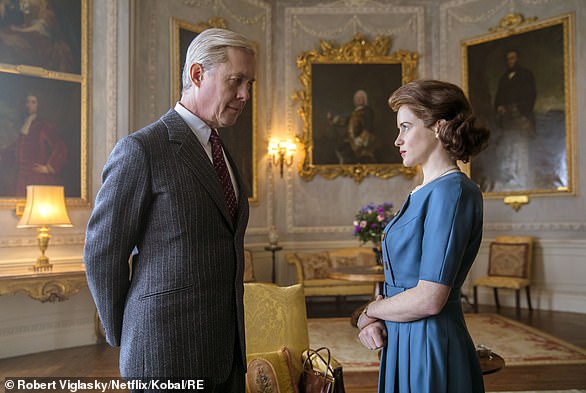 David Windsor played by Alex Jennings is pictured chatting with the Queen (Foy) in Season 1, Episode 5: Smoke and Mirrors

‘It is better to be patient and get what you desire in the right time, than have high office thrust upon you when you are not ready.’

Claire said: This quote, from Season 1, will allow you to really practice that ‘ah’ sound, and to emphasise your ‘t’s.

‘This will help you to sound and feel like a royal as you philosophise about your regal duty and understand what it means to wear the weight of the Crown. 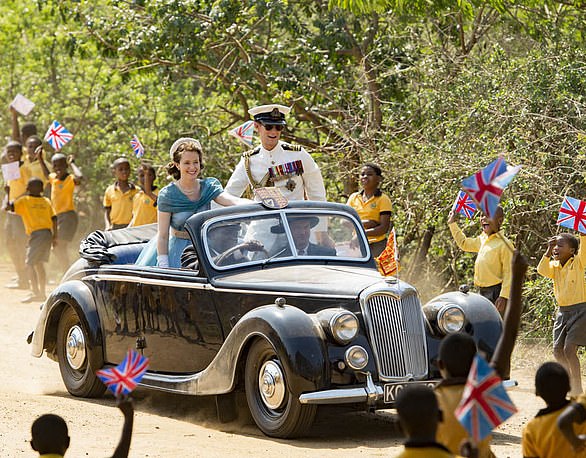 Claire is seen as the Queen alongside Matt Smith as Prince Philip (right) in Season 1, Episode 2: Hyde Park Corner

‘Would you like to know the principle, perhaps only advantage, of being the Chief Patron of the English Bowling Association? My fellow patrons are frequently too old or too ill to meet.’

Claire said: ‘This quote, from Queen Elizabeth in the early seasons, allows you to get used to the royal vocabulary with ‘posh’ terms like patrons, frequently, and perhaps.

‘It also allows for plenty of ‘oo’ sounds and will keep you practicing those lengthened vowels.’ 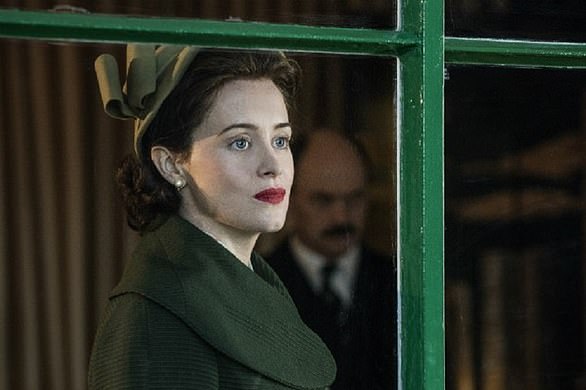 ‘Look, I’m strong. You know that. And I can cope with the truth. I just demand to know the truth. It’s when people don’t tell me the truth that I can’t bear it.’

Claire said: ‘This dramatic statement, delivered by Queen Elizabeth, is the perfect way to practice your high ‘oo’ sound in the word truth, which should sound more like ‘trooth’ in this sentence.

‘You can also practice skipping your ‘r’s and sharpening your ‘t’s, to sound like a very well-spoken truth-seeker.’ 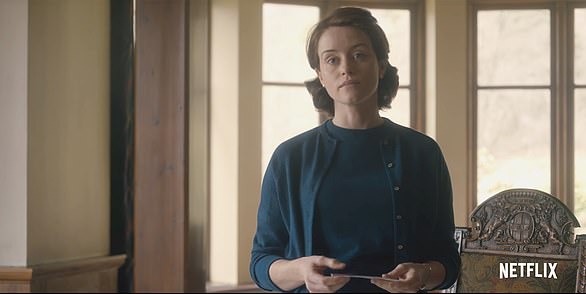 Foy is pictured as The Queen in Season 2, Episode 10 – Mystery Man