Children’s holiday entertainment springs to life in a burst of colour at the start of every school holiday break, then disappears as suddenly as it emerged.

The field of events during June-July includes theatre, dance, circus, puppetry, comedy, magic and shows based on award-winning picture books. Most events have short runs, with some popping up for only one date. 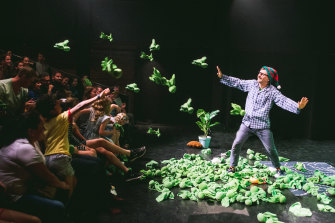 One annual source of holiday diversion is the Roola Boola Children’s Arts Festival with a diverse program of performances and arts-based workshops at Chapel off Chapel in Prahran. A highlight is The Listies′ ROFL (Rolling On the Floor Laughing) which is precisely what kids do during the show. Forget adult stand-up and treat the whole family to some “kidult” comedy in this rambunctious and ridiculous show.

The Listies comprise straight jokester Rich (Richard Higgins) and goofy, rubbery Matt (Matt Kelly), who are the hottest cult kids’ duo in and out of town. ROFL was formerly known as ROFLSHALBOWCO, an impossible to pronounce acronym for Rolling On The Floor Laughing So Hard A Little Bit Of Wee Comes Out, a line which provokes peels of naughty giggles from kids. No, they weren’t forced to change their cheeky title because wowsers complained, but for a very practical reason: “It made Google searches a nightmare”, admits Kelly. And, frankly, ROFL is easier to say.

On an almost empty stage, Kelly and Higgins cavort chaotically, making fart jokes, telling fractured fairytales and singing death metal lullabies – well, Kelly sings those. They pepper the banter with plenty of gags for oldies and the kids roar with laughter at their mad antics. Higgins echoes the despair of a parent at bedtime as he attempts to get Kelly to complete a list of chores so they can get to bed and – please, God – to sleep.

The idea for ROFL arose when Matt witnessed his young niece doing everything, including emerging with dental floss, to avoid going to bed. “It was the first time she’d ever flossed her teeth,” he notes. The duo believe ROFL is successful because it is so simple: “It’s just Rich trying to put Matt to bed. Matt doesn’t want to go to bed and Rich wants him to go to bed because he’s really tired and over it. Everybody in the audience can relate to that.”

ROFL is at the Roola Boola Festival for two shows on July 8, and tours Victorian towns before and after. Roola Boola features other performances for families including Vic State Ballet’s Beauty and the Beast (July 29), Circus Trick Tease in Brass Monkey (July 1), Hoopla Clique’s Chores (July 6), and arts workshops in circus, magic, crafts, Indigenous dance and puppetry.

From June 27, Melbourne Magic Festival conjures a program of performances at several Melbourne locations. Tim Ellis, director of the festival and president of the Australian Institute of Magic, presents The Magic Menu Live!, a family-friendly, close-up magic show performed in a secret location revealed to guests only upon booking.

After audience members knock on a wooden door and give the secret password, Ellis invites his guests “to enter through the coffin” – a coffin-shaped door decorated with a skeleton – that leads to a warm, comfortable, 32-seat theatre that Ellis built and bedecked with magic-themed paraphernalia. 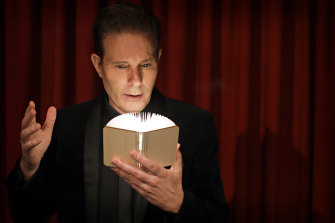 What follows is 85 minutes of gasps and wide-eyed astonishment as Ellis performs close magic and sleight of hand. We see every movement of his deft and deliciously mysterious hands on a huge screen, but it remains a jaw-dropping mystery how he executes these tricks with cards, bottles and silk handkerchiefs.

The “magic menu” is a choose-your-own-adventure performance where the audience selects magic from a menu of appetisers, entrees, mains and desserts, guaranteeing every show is different, but the utter wonderment stays the same. 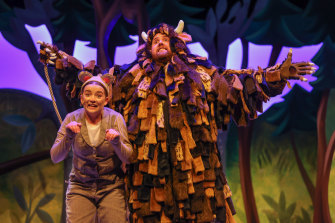 The Gruffalo: a children’s classic.Credit:Peter Wallis

Playing cards magically transform, a bell rings itself, coins disappear, objects transport themselves and Ellis reads volunteers’ minds. Adults will be as delighted, amazed and open-mouthed as the children. “Magic is the one art form that families can truly enjoy together”, Ellis says. “Even if the show is designed for the very young, the adults see the magic reflected in their children’s faces and are just as spellbound.”

If your children love shows based on their favourite picture books, then two productions at the Atheneaum Theatre will tickle their fancy. The Very Hungry Caterpillar Show, based on Eric Carle’s books, features vividly coloured and expertly manipulated puppet versions of the famous caterpillar and other characters including dog, cat, bird, seal, turtle, sheep, butterfly in a vibrant production that will charm young children.

Immediately following at the Athenaeum is The Gruffalo, that remarkably popular children’s story written by Julia Donaldson and illustrated by Axel Scheffler: “A mouse took a stroll through the deep, dark wood” and met the fox, owl, snake and the Gruffalo itself.

Kids’ shows are often overlooked by reviewers, laments Kelly from The Listies, but theatre for children can be more entertaining and beguiling – with better performances – than some served as adult fare.