With Laura Marling standing before them in ecclesiastical white, the blue-green stage lights could be stained glass and its haze machine could be wafting holy smoke.

In the first show of her international solo tour, Laura Marling delivered reverent, folky melodies and a casual, sparkling charm to a set spanning the old to the unreleased. 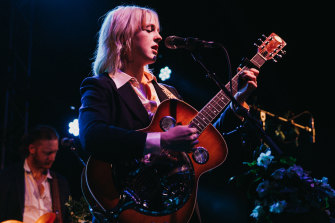 Marling’s songs often summon a sense of the ethereal: mythic, rich in narrative and with an ability to transport you somewhere completely different.

She started with the moody, slinky Beast Be Gone, a long, meandering track in which she interspersed words over strummed guitar, switching between speech and song with preternatural ease. “When we were in love,” she sang, “I was an eagle and you were a dove.” Behind Marling’s aquiline grace and vocal dexterity is the wisdom of a woman who sees things we don’t.

In the eerie minor key of Hope Is in the Air, she exuded soft, angelic fragility backed up by a certain grit, a snarl to her teeth.

Over the course of her set, Marling plundered the depths of love, mourning and modern femininity to the backing of gauzy, layered strumming.

Given her prolific career, the absence of some of her bigger songs was notable – Ghosts and Soothing, in particular – but understandable given she carried the set without any extra musical backing: just her voice coupled with delicately strummed guitar. (But it’s not the first time Marling has performed on a tiny stage – most of her shows during her 2013 visit were held inside old church halls.)

Not one to pander to an audience, she also handed out a good helping of brand new tracks; The End of the Affair, written with British producer Blake Mills, was a particular standout.

Even though Marling has long been a virtuoso – she released her first full-length album at 18 – she doesn’t take herself too seriously. In true form, during her most reverent ballads, she would occasionally break into laughter as she fiddled around for the right chord, or gaze up into the light waiting for a lyric to come to her.

But these technical lapses could be easily forgiven because you can’t help but like her – and also because it brings a phenomenon like her closer to home.