BBC viewers urge ‘anyone who shops online’ to watch ‘brutal’ drama based on true stories that shows a pregnant warehouse worker berated for not working fast enough, taking toilet breaks and having a two-minute chat

BBC viewers have urged ‘anyone who shops online’ to watch a harrowing new drama based on the real-life accounts of warehouse workers.

Life And Death In The Warehouse, which aired on BBC Three last night, is based on real stories from warehouse workers around the world who are ‘constantly surveilled and bullied to keep their pick-rates up’.

In a desperate attempt to keep her new job, Megan is forced to pressure pregnant Alys to increase her ‘pick-rate’ – how quickly she can prepare inventory for delivery – putting her unborn baby at risk.

Viewers were horrified by the ‘brutal’ regime as they watched Alys scolded for taking toilet breaks and having a two minute conversations, while Megan was told off for calling an ambulance when her pregnant friend collapsed. 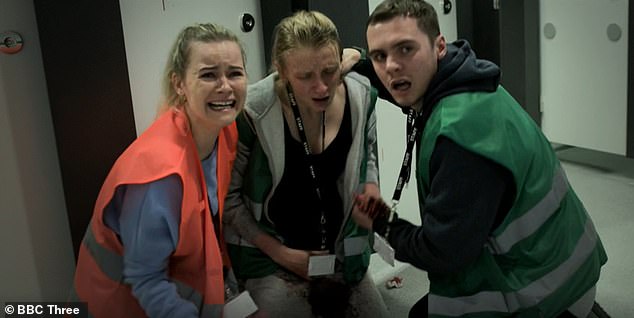 BBC viewers have urged ‘anyone who shops online’ to watch a harrowing new drama based on the real-life accounts of warehouse workers. The film begins with scenes of pregnant Alys (Poppy Lee Friar) crying in the toilet before collapsing onto the ground 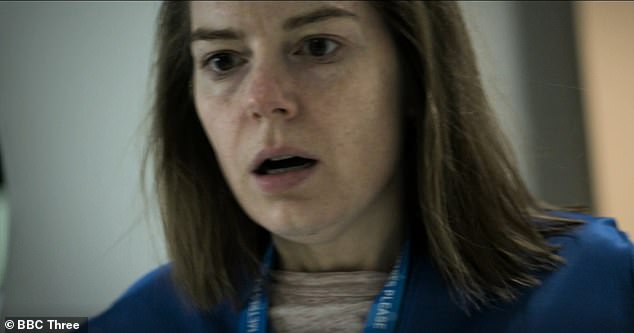 In a desperate attempt to keep her new job, Megan (Aimee-Ffion Edwards) had been forced to pressure pregnant Alys to increase her ‘pick-rate’

‘If you shop online, or even if you don’t, watch Life and Death in the Warehouse, BBC Wales, on iPlayer. We saw it by accident last night and it’s harrowing. I hope it exaggerates the horrors,’ wrote one viewer.

Another said: ‘Can’t believe what I’m watching on Life and Death in the Warehouse. The #Gaslighting too.’

‘Life and Death in the Warehouse was such a powerful and insightful piece of TV. Amazing to see and hear so many fantastic Welsh actors and Welsh voices on the television,’ a third wrote.

Another desrcibed the show as ‘absolutely brutal’ and said they would ‘pray it’s not real’.

Viewers were horrified by the ‘brutal’ regime as Alys was scolded for taking toilet breaks and having a two minute conversations, while Megan was told off for calling an ambulance when her pregnant friend collapsed

The drama began with scenes of pregnant Alys crying in the toilet before collapsing onto the ground, covered in blood, as concerned co-workers demanded Megan call an ambulance.

Action then flashed back to the first day when trainee manager Megan joined the warehouse as a manager and reunited with her childhood friend, who was working as a picker.

Tensions began to rise when pregnant Alys told her new boss she couldn’t do overtime because of a hospital appointment, with Megan warning that her ‘pick rate is already really low’.

After asking to be resigned from picking based on doctors advice, Megan provided Alys with a ‘personal enhancement plan’. 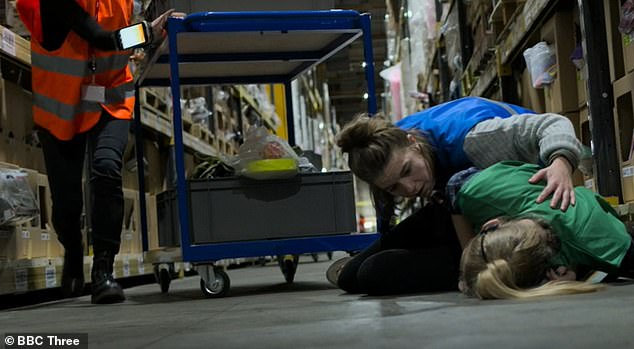 After asking to be resigned from picking based on doctors advice, Megan provides Alys with a ‘personal enhancement plan’ but after exerting herself too much, Alys collapses 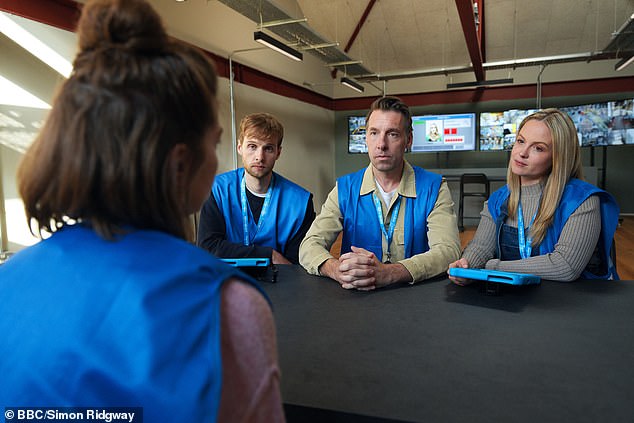 Megan is scolded by her superiors (L-R) Sion Young; Craig Parkinson; Kimberly Nixon for calling an ambulance when pregnant Alys collapsed, rather than consulting their own medical team first 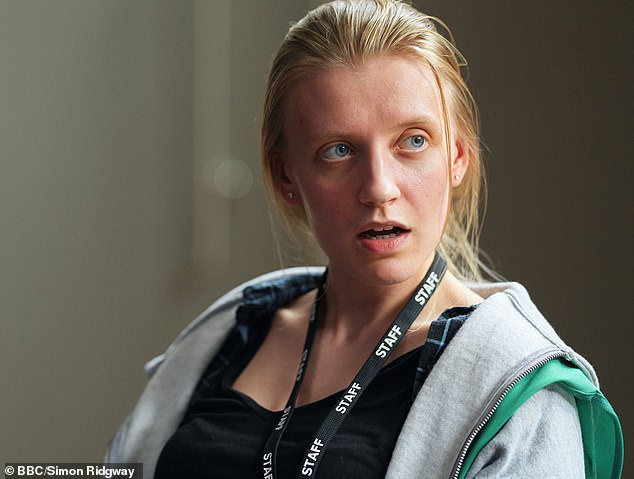 When Alys returns to work, she’s welcomes by a disciplinary from Megan for having too much ‘idle time’ including a toilet break lasting for nine minutes and a two minute conversation with a friend

‘Everyone thinks you’re a great member of the team and we don’t want to lose you’, Megan told Alys. ‘We’ve just got to get your pick rate back up.’

She advised running in between pickups and bending with her knees to increase her rate, but Megan was told by Alys that her doctor warned against extensive physical labour.

After exerting herself too much, Alys collapsed – however Megan was scolded by her superiors for calling an ambulance, rather than consulting their own medical team first.

When Alys returned to work, she was welcomed by a disciplinary from Megan for having too much ‘idle time’ including a toilet break lasting for nine minutes and a two- minute conversation with a friend.

How Amazon has faced criticism over its ‘poor’ working conditions

Amazon has repeatedly come under fire over working conditions in its warehouses.

Staff at one of the delivery giant’s warehouses were pictured sleeping on the job in Tilbury, Essex in November 2017.

Workers claimed it was because they were tired from having to meet punishing warehouse targets.

Some staff members were being taken away in ambulances after struggling to deal with the pressure of processing up to 300 items an hour, claimed an investigation by the Sunday Mirror.

An Amazon spokesperson said after the reporting of the incident: ‘Amazon provides a safe and positive workplace with competitive pay and benefits. We are proud to have created thousands of roles in our UK fulfilment centres. As with most companies, we expect a certain level of performance.

‘Targets are based on previous performance achieved by our workers. Associates are evaluated over a long period of time.’

And in December 2016 the Mail on Sunday went undercover at one of the company’s ‘fulfilment centres’ at Gourock, near Glasgow, over the Black Friday period.

Taking a job as a ‘picker’ – employed to collect items from shelves before they are boxed and sent to customers – the undercover reporter worked up to 11-and-a-half hours a day for nine days at one of Amazon’s huge warehouses.

As the pair began to argue, Alys told her boss the warehouse floor was littered with bottles of urine because pickers were too afraid to go to the toilet.

But she was still be told off for having an average of 23 minutes of ‘idle time’ a day.

Things came to a head when Alys told  Megan she wasn’t not feeling well, but was warned that she could lose her job and maternity pay if she left the warehouse before the end of her shift.

According to the BBC, pregnant women routinely fall below their target ‘pick-rate’ and are subjected to even more extreme monitoring including constant CCTV and algorithmic surveillance.

While the drama echoes real life cases, and has been written based on real-life accounts – the BBC has stated characters and their experiences are fictional and not based on any single event or company.

A rapid increase in online shopping has led to an explosion of warehouse jobs in Britain, with around a million people working in distribution centres across the UK.

In November last year an Amazon worker claimed employees at the warehouse she was based in Manchester worked under ‘slave-like’ conditions, ‘mental targets’ and faced ‘pressure not to take bathroom breaks’.

The woman in her 30s, who worked as an order picker for £9.70 an hour told The Sun that in order to hit her target, she needed to pack 360 items per hour – one every ten seconds.

Amazon told the publication their targets are regularly evaluated and based on ‘attainable employee ­history’ and ensure: ‘safety is a priority, that everyone is supported, treated with dignity and respect, gets regular breaks, and works at a comfortable pace.’

In 2019, it was reported that a Sports Direct warehouse worker delivered her child in a cubicle at the company’s Shirebrook warehouse complex, in Derbyshire in 2014.

The warehouse worker reportedly told concerned colleagues she ‘had to go back to work’ as her baby struggled to survive, a witness said, after the woman had cut its umbilical cord herself with a box cutter.

Sports Direct denied employees were made to turn up to work when they were unfit to do so.

Fiona Campbell, Controller BBC Three, said of the drama: ‘This factual-based drama will no doubt raise some questions. We know that this is what the best factual programmes do – they help people understand the world they are living in and drive conversation about stories relevant right now.’

Aysha Rafaele, Executive Producer, added: ‘We may not think about this, but every time we click for a next day delivery there’s a person at the other end, working in a warehouse to fulfil that need.

‘Our latest BBC Three drama shines a light on this terrifying new reality where workers can be constantly surveilled, bullied to keep their pick rates up, every moment of idle time calculated to the second.

‘I hope this film will help raise awareness of the taxing demands many young people are facing in their workplace today.’