‘Is it 9pm yet?’: Line of Duty fans count down the hours until Jed Mercurio’s highly-anticipated sixth season airs saying: ‘we finally have something to look forward to’

Excited Line Of Duty fans have shared their anticipation ahead of the police drama’s highly-anticipated sixth season airing this evening.

The show’s latest series, airing on BBC One tonight, will see Vicky McClure, Adrian Dunbar and Martin Compston returning as the dynamic AC-12 police squad – and promises to be one of the most sensational yet.

Fans of the smash-hit show can hardly contain their excitement, with hundreds taking to Twitter to share their joy, with one saying the return of the show is the ‘best thing to happen all year’.

Another said they had just been ‘wasting hours in the day’ until the show’s premiere. 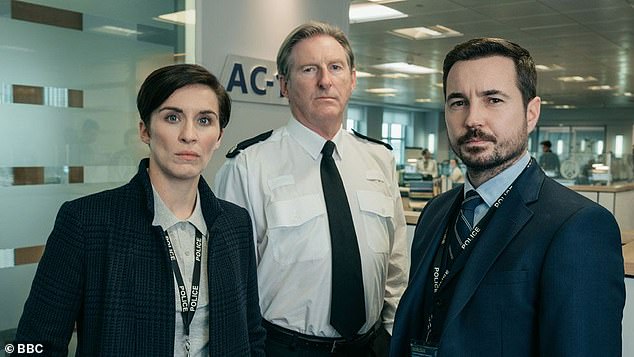 The sixth season of Line of Duty, airing this evening on BBC One, will see Vicky McClure, (left) Adrian Dunbar (middle) and Martin Compston (right) returning as the dynamic AC-12 police squad

One very excited user said: ‘#LineOfDuty reporting for duty and ready for action. Am I ready? …..MOTHER of GOD……I am so ready.’

‘Okay I’ve just finished catching up with #LineOfDuty. I have not mentally recovered from the emotional rollercoaster that was season 5 but bring on #LineofDuty6’, wrote another viewer.

A fourth commented: ‘Sooo excited! This must be the best thing to happen all year #LineOfDuty.’

Another excited viewer wrote: ‘The whole day is just a time-killing exercise until #LineOfDuty starts’.

Elsewhere, a Twitter user quipped: ‘Going for a nap now so I can be at my best for #LineOfDuty tonight.’

The sixth season of the show will follow on from the revelation that mysterious criminal mastermind H was in fact code for four people.

Guest lead Detective Chief Inspector Joanne Davidson (Kelly Macdonald) is assigned as the senior investigating officer on the unsolved murder case, but her suspicious conduct attracts the attention of the anti-corruption team. 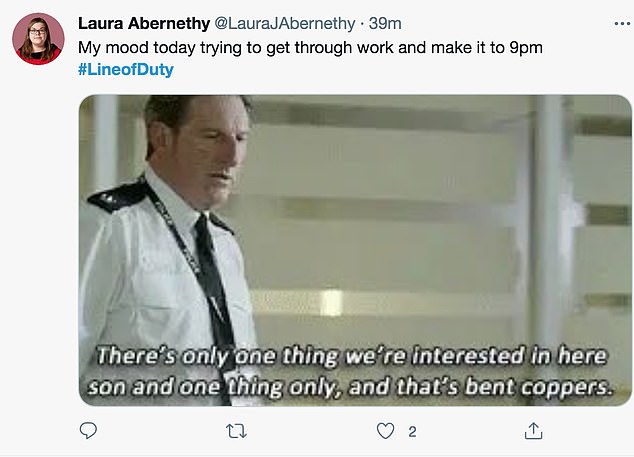 Fans of the smash-hit show can hardly contain their excitement, with several taking to Twitter to share their joy, with one saying the return of the show is the ‘best thing to happen all year’

Shalom Brune-Franklin, 26 — who has appeared in BBC’s Our Girl alongside Michelle Keegan — is the new addition to the AC-12 team as Detective Constable Chloe Bishop.

Jed Mercurio – who has masterminded the show since its inception in 2012 – last week teased a major link to the first-ever series, which saw the AC-12 unit investigate the corrupt actions of DCI Tony Gates [played by Lennie James].

‘One of our main locations for this series is Hillside Lane Police Station,’ he said in quotes released by the BBC. 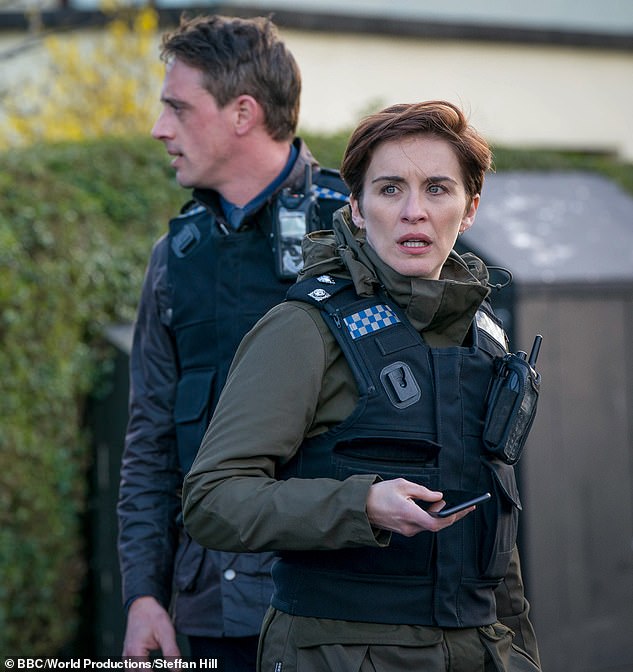 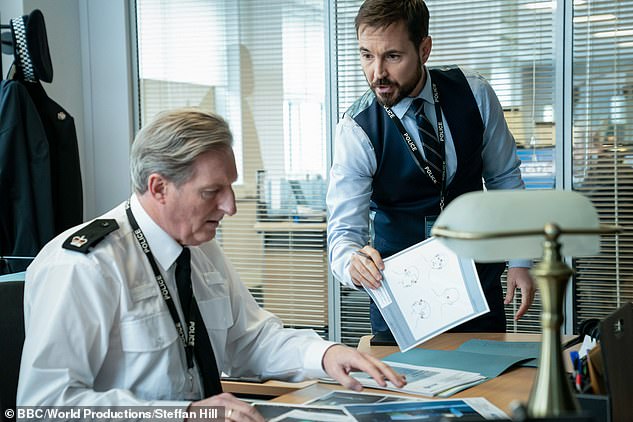 Of his co-stars, Dunbar said: ‘I thought Vicky in particular has done some memorable work this series and Martin has some emotional scenes. Ted is put through the ringer; particularly towards the end’

‘It’s actually a police station that is mentioned way back in series one – Matthew Cottan served here before he joined Kingsgate station where he was on the same team as DCI Tony Gates.’

‘[Hillside Lane] is the home station for our guest lead DCI Joanne Davidson and Kelly is giving a terrific performance in this character,’ Mercurio added. ‘I would describe her as the most enigmatic adversary that AC-12 have faced to date…

‘AC-12 will investigate what’s going on at Hillside Lane Police Station… and we look at the investigation of a cold case. It’s a high profile murder case of Gail Vella that has remained unsolved for over a year and which the police force is struggling to solve. There’s been no closure.’

Martin, 36, also shed light on the physical and mental state viewers will find his character in.

He said: ‘At the beginning of the series, Steve is still a DS. So, still no promotion but he is chasing! He has got bored as AC-12 is now tainted and the investigations have been severely curtailed.

‘At the start, he is chasing up mundane cases; similar to chasing Lennie James over the expense of a bacon roll in the first series! 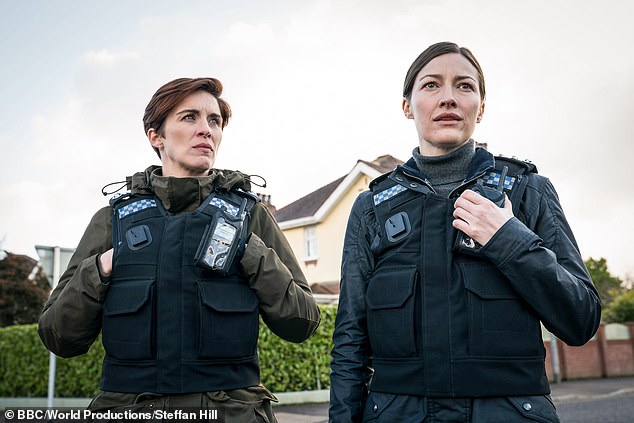 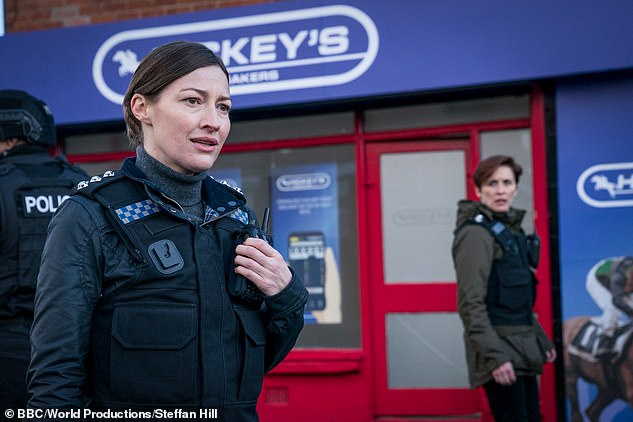 McClure said of her co-star: ‘We had some brilliant scenes to do together and enjoyed many jigsaws together! I think everyone will be blown away with Jo’s story line. It couldn’t of been in better hands’

‘Steve thrives on the thrill of the chase and the adventure of it so he’s a bit lost and having issues both physically and mentally. He definitely sees himself as a bit of a Sherlock Holmes with a waistcoat.’

Sharing details on the state of the Anti-Corruption Unit, Dunbar added: ‘Quite a lot has happened and there’s been quite a time jump. In his working life, a lot of things have destabilised which have affected the unit.

‘I think [Ted] is another year older but not another year wiser. We are still on the search for the network of corrupt coppers. Are we any closer to them? Hopefully!

‘Let’s face it – time is running out a bit for Ted; the age he is, whether he can stay in the force, is he useful enough, is he a bit of a dinosaur? He’s up against quite a bit. His personal life is not in great shape.’

Of his co-stars, Dunbar said: ‘I thought Vicky in particular has done some memorable work this series and Martin has some emotional scenes. Ted is put through the ringer; particularly towards the end.’

Line Of Duty creator Jed Mercurio excited fans when he shared the first clue about the plot of season six to Twitter.

Uploading a snap of a packet of the Australian chocolate biscuits TimTams with the caption ‘#LineofDuty Series 6 Plot Clue No. 1’, fans began to ferociously speculate as to what it might mean.

But one plot point hanging over the next season of the show is about the identity of the ominous ‘H’.

While the mystery was somewhat answered in the season five finale, it was also revealed that there are FOUR people pertaining to be ‘H’, with the final one still unknown.

So who could it be?

She was one of season five’s stand-out characters, swooping in towards the end of the series to interrogate Ted Hastings – highly suspected to be ‘H’ at the time.

And while she simply seemed to be excellent at her job – and hellbent on uncovering the corruption within the department – could it be that Patricia Carmichael was SO keen to pin the blame on Ted to take the focus away from herself.

Could SHE be the fourth ‘H’?

Her position of power and respect, along with her unnaturally steely and cut-throat demeanor, could well point to this.

Ted Hastings was pinpointed by viewers of the show, as well as the characters on the show, to be a candidate for ‘H’.

But it seemed he was exonerated by the end of season five, allowed to walk free.

But could be potentially be triple-crossing us all? Could he in fact STILL be the potential fourth ‘H’.

The biggest issue with this theory is that Gill Biggeloe – one of the three revealed to be ‘H’ – was so against him. Surely she wouldn’t be working to deter him if they were in league?

UNLESS, she doesn’t KNOW he is the fourth ‘H’?

Detective Chief Constable Andrea Wise was new to the show in season five and is another high-powered contender for ‘H’.

She has been constantly interfering when it has come to supporting AC-12’s investigations, removing them from the investigation into Operation Pear Tree. She also instigated the Ted Hastings investigation.

She is also keen to cover up police corruption, despite announcing at the end of season five: ‘This constabulary will work tirelessly to root out rotten apples in its ranks.’

Police and Crime Commissioner Rohan Sindwhani demanded to be ‘in on’ a meeting between Andrea Wise and Ted Hastings. This might be a small clue but any clue could be valid at this point.

Any shady behavior suggests ‘H’ is at play, and so Rohan could indeed be culpable.