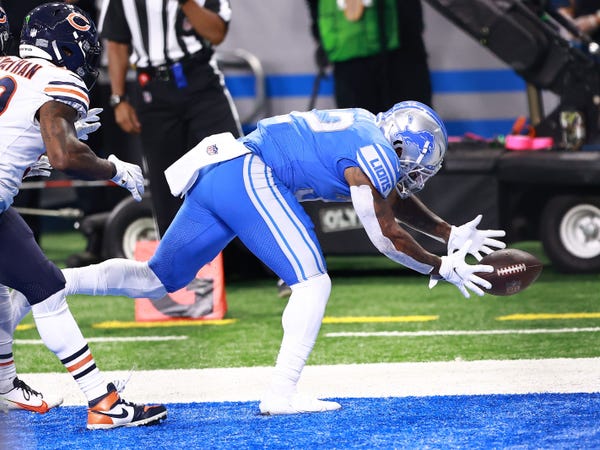 The Detroit Lions are licking their wounds after letting their first game of the season slip from their hands. Literally.

The Lions entered the fourth quarter of their season opener with a 23-6 lead over the Chicago Bears. If they could avoid disaster in the final period, they'd be on their way to a 1-0 start to the season.

But surprisingly, Mitch Trubisky had other plans. The much-maligned Chicago quarterback threw three touchdown passes in the fourth quarter to jump the Bears out to a 27-24 lead with just under two minutes remaining.

The Lions needed to drive the length of the field for the comeback win, and they almost got there, working their way to the Chicago 16-yard line with just 11 seconds remaining.

On the next play, Matthew Stafford targeted rookie running back D'Andre Swift, who was streaking towards the end zone. Stafford hit Swift in the hands with a perfect pass. Swift dropped it.

One more incompletion, and the Lions had snatched defeat from the jaws of victory.

"I put my arm around him as soon as we got to the tunnel, walked up the tunnel with him and told him he's a great player," Patricia said after the game, per ESPN. "The game's not on him. It's on me."

Swift should have plenty more opportunities for game-changing plays, and it's clear that his head coach still has faith that he'll come up with a big play the next time he gets the chance.

Related posts:
September 13, 2020 Lifestyle Comments Off on Lions head coach Matt Patricia comforted rookie running back D’Andre Swift after he let a game-winning touchdown slip through his hands
Celebrity News:
Jordyn Woods, 23, Goes Instagram Official With Karl-Anthony Towns, 24, In Romantic Beach Pics: ‘I Found You’
Simon Cowell admits he is ‘terrified’ of son Eric being bullied as he details the name he almost gave him
Drew Barrymore Reunites with Ex-Husband, Tom Green, After 15 Years of Not Speaking
Piers Morgan: GMB star hits out at BBC following Andrew Neil step down ‘Treated shabbily’
Taylor Swift’s Gift For Gigi Hadid’s Baby Girl Is The Sweetest Ever
Recent Posts
This website uses cookies to improve your user experience and to provide you with advertisements that are relevant to your interests. By continuing to browse the site you are agreeing to our use of cookies.Ok