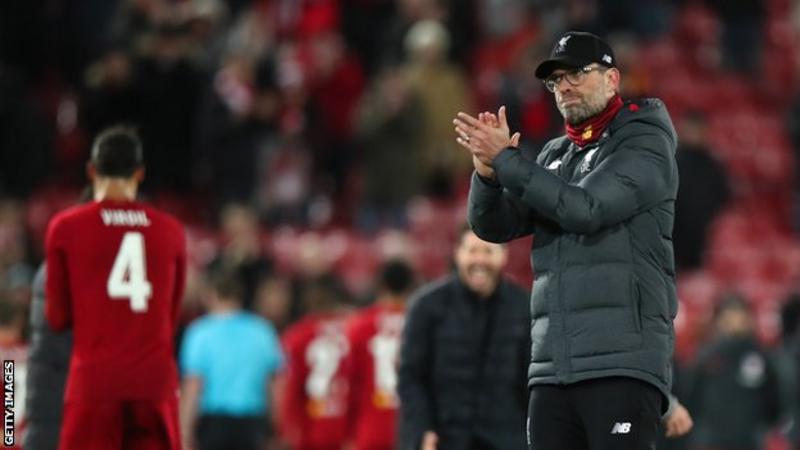 Liverpool’s season is suddenly under a strange sort of scrutiny after they were bundled out of the Champions League by Diego Simeone and his Atletico Madrid streetfighters’ smash-and-grab raid.

In the space of a week, the Reds have gone out of the FA Cup at Chelsea and now their European crown has been knocked off their heads in the Anfield arena that has been a fortress under manager Jurgen Klopp.

This was a chastening, painful night. Liverpool laid siege to Atletico’s goal but failed to land the knockout blow – and they then paid the price as deputy goalkeeper Adrian’s put the skids under them after they finally held the lead in a tie that lived on a knife edge.

Give Atletico an inch and a mile is the least they take. Simeone’s men were ruthless once they had a sniff of victory, leaving Liverpool to swallow their second big disappointment in just a few days.

It revived a few whispers that their season may end as something of an anti-climax as what looked like an assault on several fronts is now down to completing the formalities of their first league title in 30 years.

In reality, Liverpool were outstanding until Adrian, deputising for the injured Alisson, opened the door for Atletico when his error led to substitute Marcos Llorente’s vital away goal.

Many, including Klopp, were sniffy about Atletico’s approach, suggesting a side of such talents can be more progressive.

But Atletico’s players, fans and their talismanic coach seemed happy enough with their gameplan as they celebrated wildly at the Anfield Road end at the conclusion of extra time.

Liverpool will always nurse huge disappointment after any Champions League exit, especially after claiming the trophy for the sixth time by beating Tottenham in Madrid in June.

And yes, there will be a sense of anti-climax that they could only reach the last 16 in defence of their crown – but to suggest this bitter loss takes a heavy layer of gloss off Liverpool’s campaign when it does eventually end is a nonsense.

Liverpool have not quite had that relentless intensity that carried all before them since they returned from the winter break in mid-February, but for a large part of this tie Klopp’s side were right back to their best.

Their problem was they ran into a magnificent goalkeeper in Jan Oblak and a tough-as-old-boots Atletico side supremely indifferent to the much-vaunted Anfield atmosphere.

This will still be, once the red ribbons are tied on the Premier League trophy, a magnificent season – and it may actually be a tribute to the performance levels Klopp’s Liverpool have produced in recent years that there was a growing expectation they would add another Champions League to the domestic title.

The Reds’ 25-point lead at the top of the table, with one league defeat in 14 months, tells the tale. They have also added the Uefa Super Cup and the Club World Cup to the trophy cabinet.

On this night, they were holed below the waterline by the injury to their world-class Brazilian goalkeeper Alisson.

Adrian has been pressed into action more than he or Liverpool would have expected this season, with Alisson suffering two injuries, and his graph of performance and reliability is very much on a downward curve.

After a colossal arm wrestle, Liverpool finally had this tie in their grasp when Roberto Firmino’s first goal at Anfield this season put them ahead on aggregate but Adrian’s error, a dreadful clearance exacerbated by a poor attempt to save Llorente’s shot, finished Klopp’s side off.

It is purely hypothetical to suggest Alisson would not have made those decisive errors – but it is a pretty safe assumption.

And on such fine margins these ties can hang.

Credit to Atletico, though, for the manner in which did the job on Liverpool in lethal fashion. You can question their style as long as you like, but they can simply point to the scoreline.

Simeone and Atletico deserve plaudits for the manner in which they are organised, their refusal to bend in the face of a baying Anfield, and the sheer love of defending which is almost unique in the European game.

Liverpool will wake up to pain on Thursday because they revel in their status as European royalty. Defeats such as this hurt badly, especially when they are inflicted at Anfield.

There will not be much in the way of consolation right away – but it is back to Premier League business in the Merseyside derby at Everton on Monday.

And the thing all Liverpool fans have dreamed about for the past 30 years is still only two wins away.