Australia’s 179-strong team in Tokyo is littered with medal chances but the table tennis crew, spearheaded by a former Chinese competitor who lost his arm in a bear attack as a child, could spring more than a little surprise.

The story of Ma Lin, a naturalised Australian and one of the greats of para table tennis, is both eye-catching and uplifting. 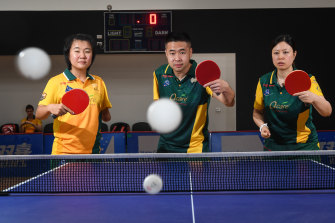 Already with four gold medals to his name from three previous Paralympics, Ma Lin is one of three former Chinese athletes who are now wearing Australia’s green and gold at a Paralympics for the first time.

Aged just five, Ma Lin lost his right arm after being bitten by a bear at a zoo near his home in provincial China in the mid 1990s.

The attack occurred when he tried to pat the bear through a narrow gap in the fence. While it could have killed him and changed the course of his life, he has instead turned his misfortune into opportunity.

He was inspired to take up table tennis after watching China will all four gold medals on offer at the 1996 Atlanta Olympics, including Guoliang Liu’s triumph in the men’s singles.

Little more than a decade after his near-death experience, Ma Lin was executing his craft at world championships and won a gold medal at the Beijing Paralympics in 2008, two more in London four years later and one more in Rio de Janeiro in 2016.

In the aftermath of competition in Brazil five years ago, Ma Lin moved to Melbourne and first represented Australia in an able-bodied competition two years ago.

He said he liked the environment in Australia.

“In Australia [I] can have a better education, a better life.”

Ma Lin can recall the bear attack 25 years ago that left him with extraordinary blood loss and resulted in his arm being amputated.

Unsurprisingly, Ma Lin, with his quiet demeanour, said he was left “numb” by the encounter.

“There was a fence, but there was still some space to put your hand,” he said through the interpreter.

Fast-forward to after Rio in 2016, and Chinese champions Ma Lin, Lei Lina and Yang Qian all moved to Australia and pledged their allegiance to their new country.

It has been a boon for the Australian Paralympic table tennis program, with all three selected for Tokyo and part of the record 11-strong team that has big hopes of getting on the podium after teammate Sam von Einem broke a 32-year drought when he won a silver medal for Australia in Brazil.

Then there’s Melissa ‘Milly’ Tapper, who, remarkably, is wearing the green and gold at both the Olympics and Paralympics for a second time in five years.

Ma Lin, who began his competition with a 3-0 victory over Great Britain’s Joshua Stacey on Wednesday and counts Arnold Schwarzenegger as a hero, would dearly love to win another gold for his adopted country.

“His goal is to get the gold medal, but if he can stand on the podium it’s still good enough,” Ma Lin’s interpreter explained.

For Lei Lina, who was born with a deficiency in her right lower leg (missing a bone) and took up table tennis because her father was a coach, the chance to go to a Paralympics for a fifth time – but this time wearing different colours – was warmly welcomed.

“Everything is a new start, and I like the vibe in Australia,” she said.

Sports news, results and expert commentary. Sign up to our Sport newsletter.