An Australian government minister has met China’s new ambassador, the most senior contact between the two nations in years, but they failed to resolve any outstanding disagreements.

China’s new ambassador to Canberra, Xiao Qian, sought a meeting with the Minister for Foreign Affairs, Marise Payne, several weeks ago and Senator Payne eventually granted him an appointment in Sydney on Wednesday. 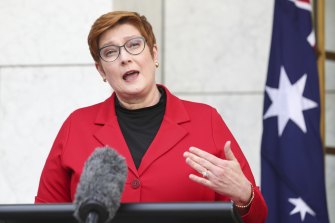 Mr Xiao has struck a conciliatory tone in public comments since arriving in Australia in January but without any sign of any substantive relenting from Beijing nor any initiative from Canberra, according to the Australian overview of the meeting.

The essential impasse is that China’s government has demanded Australia make concessions in 14 areas of its sovereignty while under Chinese trade boycotts on over $20 billion worth of its exports, but Australia has refused to yield.

According to the readout provided to The Sydney Morning Herald and The Age, Senator Payne “set out frankly Australia’s positions on a range of issues, including the importance of appropriate ministerial and other high level dialogue and engagement, stability in the Indo-Pacific, free and open trade, human rights and the welfare of Australians detained in China”. 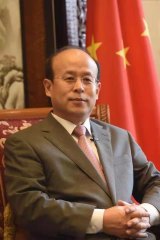 “She also articulated Australia’s expectation that China use its influence to encourage and advise Russia to end the illegal invasion of Ukraine.”

The only affirmative offering in the Australian version was the phrase that “Australia remains committed to a constructive relationship with China in which we can pursue areas of cooperation,” but this was conditioned on “remaining consistent with our own national sovereign interests and focussed on stability”.

The head of ANU’s National Security College, Rory Medcalf, said “it’s a positive signal that points to the realisation on China’s side that Australia is not going to change, that coercion isn’t working but they can’t completely do without dialogue”.

“This is a more measured approach from the Chinese embassy,” said Professor Medcalf, “but the problem is that it’s at odds with the rhetoric coming out of Beijing,” such as the criticism this week from Foreign Affairs Minister Wang Yi that Australia was one of the “acolytes” in a “sinister move” by the US to “establish an Indo-Pacific version of NATO”.

Mr Xiao has energised his embassy’s engagement with Australia’s business community and former politicians by initiating a wide range of meetings since presenting his credentials to the Governor-General, David Hurley, on February 10, the formal beginning of his posting.

In conversations with Australians in the private sector in recent weeks, Mr Xiao has said he is carrying a message from Chinese President Xi Jinping for the Australian government.

Asked the content of the message, he has told his private sector interlocutors the President’s message is, “Australia has been treating China like the enemy. Australia has to decide
whether it is China’s enemy or China’s friend”.

This suggests that Mr Xi is putting the onus on Australia to make concessions to China. It is not clear what concessions he has in mind.

The ambassador defended China’s trade bans on Australian exports but hinted at a retreat on Beijing’s notorious “14 demands” on Australian sovereignty delivered by China’s embassy in Canberra in November, 2020, which he described as being a “gross misunderstanding”.

This suggests that Beijing considers the demands a failure and is now seeking to back away from the list.

Prime Minister Scott Morrison first reacted to the list by saying that “Australia can never compromise on our national interests”.

Mr Morrison later personally handed copies of the list to the leaders of the Group of Seven rich democracies – the US, Japan, Germany, Britain, France, Italy and Canada – to help rally international support for Australia in the confrontation.

A US China expert who now serves as US President Joe Biden’s senior China adviser, Rush Doshi, said the list was part of “a kind of illiberal order building”.

The demands included that Australia ease its foreign investment laws for China, dump its ban on Huawei as a 5G carrier, change its foreign interference and espionage laws, gag the media from any criticism of China and bar members of Parliament from criticism of Beijing’s policies, among other items.

In delivering the list to a journalist for publication, the Nine Network’s Jonathan Kearsley, a
Chinese diplomat told him that the 14 points and the trade boycotts on Australia were “all linked”.

“The economic, diplomatic situation from China’s view is all linked to the geopolitical atmosphere,” the official told Kearsley.

She added, “China is angry. If you make China the enemy China will be the enemy.”

The Chinese embassy was approached for comment on the meeting but had not responded by deadline.