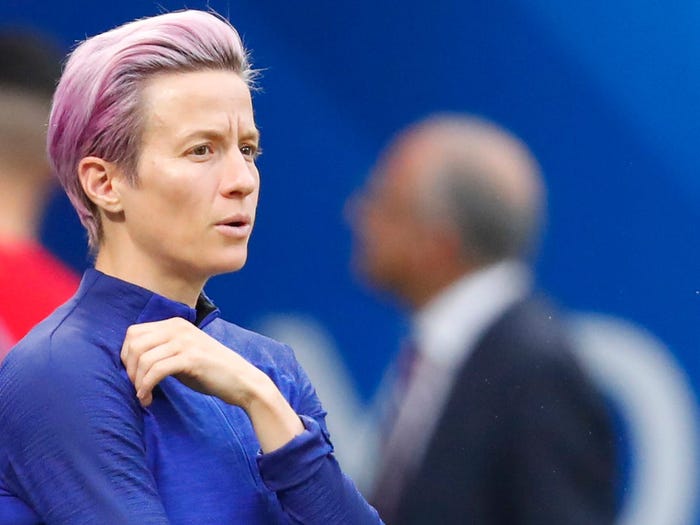 Megan Rapinoe was chosen for the 2020 FIFA FIFPro World XI.

The US Women's National Team and OL Reign superstar, while still incredibly impressive when she takes the pitch, hasn't played a single game since March. And while she's "honored and flattered" to have been recognized by the international soccer governing body as one of the best 11 female soccer players on the planet this year, she admitted that her selection "did come as a surprise to me."

"We have so many phenomenal female players around the world, and all of us need to do what we can to recognize them," Rapinoe wrote in a note she posted on Twitter. "The fact that I was selected once again sheds light on the fact that in order to push our game forward, we need continued investment in the women's game to give more female players the opportunity to be seen on TV in their home countries and globally while performing for club and country."

"The future of our game is so bright, the potential is limitless, and our commitment to pushing it forward from every possible angle has to match that," she added.

FIFA's criteria for the award this year required players to have appeared in at least 15 official matches between July 8, 2019, and October 7, 2020. The pink-haired forward narrowly hit that requirement, playing 16 total games for club and country in that span.

But half of those matches came before the start of 2020 — the year this FIFA FIFPro World XI is technically intended to signify. And, in the eight games she played this calendar year, Rapinoe played a total of just 366 minutes, and not a single match whistle to whistle.

Rapinoe doesn't criticize her peers — the professional players from around the world who were responsible for voting her onto the 11-player FIFA FIFPro World XI roster — for adding her name to the list. Instead, the reigning World Cup Golden Boot and Golden Ball winner blamed a lack of investment in, and thus exposure of, the women's game.

Her logic is sound. Imagine if more people — professional soccer players around the world included — could witness the brilliance of Crystal Dunn from their TV sets, or read about Debinha in prominent media outlets, or regularly watch Sam Kerr highlights on ESPN. Perhaps that would better enable those allocating international awards to select honorees based more on merit than on name recognition.

This isn't to say that Rapinoe isn't worthy of many, many honors. Her astounding activist work off the pitch has enabled her likeness to transcend the world of sport. And she's still absolutely brilliant on the soccer field, as evidenced by her two goals and five assists for the USWNT on the year despite playing just 46 minutes per game on average in 2020.

Still, there were undoubtedly many players better suited to make the FIFA FIFPro World XI this year. Dunn, Debinha, Kerr, all of whom could have reasonably been voted in as forwards, would have made more worthy candidates. Those three stars — plus Jenni Hermoso, Caroline Graham Hansen, Alexandra Popp, Eugénie Le Sommer, and Lynn Williams — were the players classified as forwards included on Insider's "Top 50 Best Footballers of 2020" list. Rapinoe, due to her extended absence from play, was not.

It's a decision I stand by, and a decision I'm confident Rapinoe herself would agree with.

Related posts:
December 24, 2020 Lifestyle Comments Off on Megan Rapinoe doesn’t even think Megan Rapinoe deserved to receive one of the most prestigious international soccer awards
Celebrity News:
Tayshia Adams’ Relationship Tip For Spicing Things Up Is So Useful
Orlando Bloom Gushes Over Katy Perry After Her Stunning Inauguration Performance: I’m So ‘Proud’
Cardi B Jokes About 'Driver's License' Cover, Olivia Rodrigo Responds
Billie Eilish Premieres New Video For ‘Lo Vas A Olvidar’ With Rosalía!
Clare Breaks Her Silence, Alleges Dale Confirmed Split Without Her Knowledge
Recent Posts
This website uses cookies to improve your user experience and to provide you with advertisements that are relevant to your interests. By continuing to browse the site you are agreeing to our use of cookies.Ok