A meteorite that fell to Earth in a ‘spectacular fireball’ over Germany in September holds proof that liquid water existed during the earliest days of the solar system.

Experts from Munster University in Germany found that it contained minerals that had to have formed under the presence of water billions of years ago.

The team of planetologists believe it could have come from a larger ‘planetesimal’ class of asteroid that would have made up the building blocks of rocky planets.

The tiny one-inch meteorite weighs just 0.1 ounces and was named Flensburg after the town where it fell to Earth. 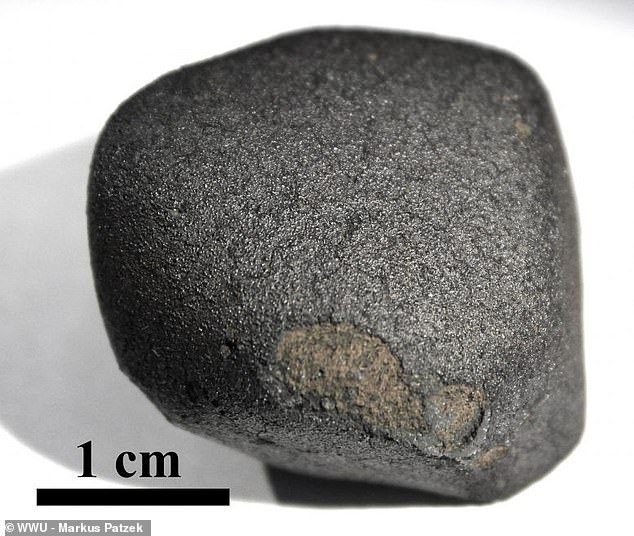 The first set of studies into the meteorite show that it contains minerals that formed in the early years of the solar system and required liquid water in order to develop.

This proves that ‘that 4.56 billion years ago there must have been small bodies in the early solar system storing liquid water,’ said researcher Addi Bischoff.

These types of early parent planetary bodies are very rarely discovered by scientists and could be the ‘blocks’ that helped form the inner planets of the solar system.

In fact they could be considered the ‘building blocks’ of the Earth and may well have delivered the water that makes up the oceans that cover the planet today.

The team at Munster are working with researchers from Berlin on a study of ancient asteroids and other space rocks that made up the early solar system.

It’s called ‘Late Accretion onto Terrestrial Planets’ and is trying to work out exactly how the rocky inner planets of the solar system formed.

‘The major aim is to understand the late growth history of the terrestrial planets,’ the team said in a press release.

One of the areas of study is exactly how the Earth got its water, how the inner core formed and what happened to make it the way it is today. 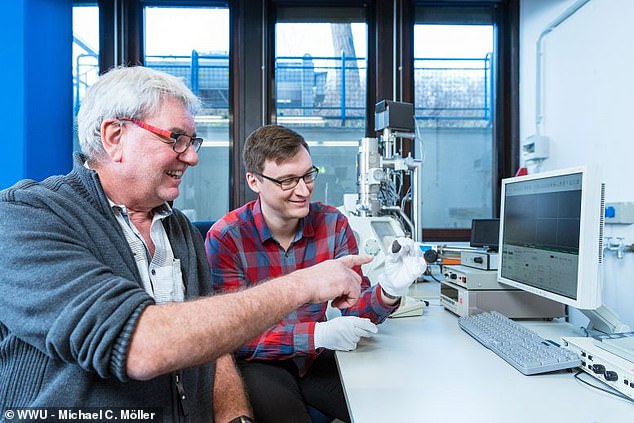 Planetologists Prof. Addi Bischoff (left) and Markus Patzek with the meteorite ‘Flensburg’ in front of the scanning electron microscope. It could help researchers discover the origins of planet Earth

In order to find answers to this question, the researchers are investigate various aspects including meteorites that have fallen to Earth.

Most of them are fragments of asteroids and can be regarded as the oldest rocks of our solar system and make them vital for finding what things were like billions of years ago in the earliest days.

‘studying them allows us to gain insight into the formation processes of the first solids and accretion and evolution of small bodies and planets,’ the team said.

When it landed in September last year it was described as a ‘fireball int he sky accompanied by a bang’ that amazed hundreds of eyewitnesses.

The research has been published in the journal Meteoritical Bulletin Database.

WHAT ARE THE DIFFERENT TYPES OF SPACE ROCKS?

An asteroid is a large chunk of rock left over from collisions or the early solar system. Most are located between Mars and Jupiter in the Main Belt.

A comet is a rock covered in ice, methane and other compounds. Their orbits take them much further out of the solar system.

A meteor is what astronomers call a flash of light in the atmosphere when debris burns up.

This debris itself is known as a meteoroid. Most are so small they are vapourised in the atmosphere.

If any of this meteoroid makes it to Earth, it is called a meteorite.

Meteors, meteoroids and meteorites normally originate from asteroids and comets.

For example, if Earth passes through the tail of a comet, much of the debris burns up in the atmosphere, forming a meteor shower.