Millions of homes across the UK have slower broadband than the 20Mbps average speeds available at London Underground stations, a new study finds.

More than four million UK households have slower broadband than the London Underground, according to new research.

Data collected by Uswitch.com found that more than four million UK households have slower internet than commuters get while waiting for the next tube train.

The average speed available to commuters is 19.8Mbps, compared to an average of around 8.8Mbps for more than 4.4 million homes. 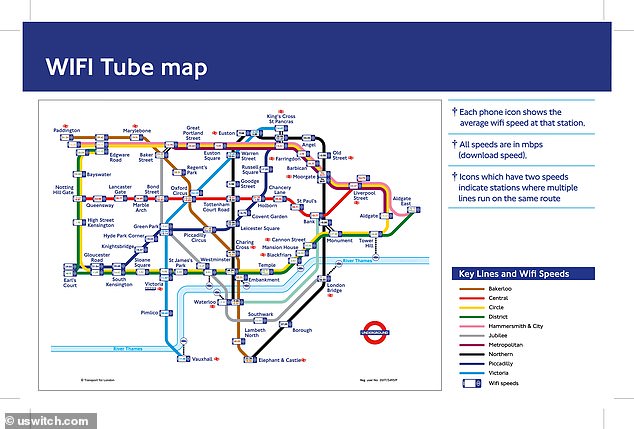 According to the research, the Bakerloo line was the fastest, with average speeds of 24Mbps available to commuters waiting on the platform.

Uswitch.com analysed the wifi speeds across all 99 station platforms in Zone 1 of the underground network and found 30 would be classed as having ‘superfast’ speeds.

‘Overall, 30 of the 99 station platforms tested would qualify as having superfast fibre broadband because they have speeds of over 24Mbps,’ Uswitch said.

It isn’t an equal playing field when it comes to tube stations, while the Bakerloo is racing along – the District line had the slowest average speed of just 5.58Mbps.

Those keen on streaming content while out in London should head to Edgware Road, the report says, where download speeds of 49.7Mbps were recorded.

That is the fastest station, rather than an average across all stations on a particular line and is fast enough to download a one hour TV show in around 48 seconds.

Westminster was named as the slowest station for download speeds, being clocked at 0.9Mbps – the same one hour programme would take around 40 minutes.

The Northern line branch of Embankment station, Charing Cross, Lambeth North and the Circle line branch of Paddington were named as the other fastest stations.

Nick Baker, broadband expert at Uswitch.com, said: ‘It is amazing that the oldest underground network in the world can provide its users with the means to stay connected and download their favourite programmes whilst travelling.

‘If you’re looking to stay up to date with the latest season of The Witcher, you can head over to the Bakerloo line and have it downloaded in no time.

‘But the fact that the current WiFi on the tube offers faster connections than 30% of broadband-connected homes in the UK receive, just goes to show the extent of the digital divide across the country.’ 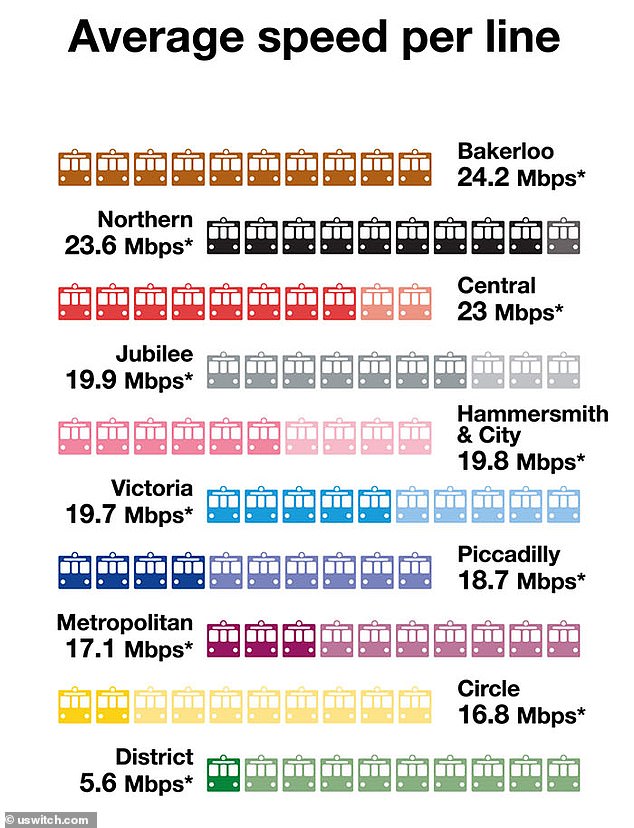 According to the research, the Bakerloo line was the fastest, with average speeds of 24Mbps available to commuters waiting on the platform

The Government has pledged to bring gigabit-speed broadband to every home and business in the UK by 2025, with a £5 billion investment for the scheme expected to be announced in this week’s Budget.

The wifi networks used to provide broadband internet on the tube could be superseded in future as 4G mobile masts are due to be installed later this month.

The Jubilee Line will get 4G first and it will extend to all platforms and tunnels int he eastern half.

‘This is a really important step for the millions of people who use the Tube each year,’ London Mayor Sadiq Khan told the BBC.

‘Introducing 4G and, in the future, 5G, will help Londoners and visitors keep in touch and get the latest travel information while on the go.’

WHAT ARE THE PLANS TO SUPPLY THE WORLD WITH INTERNET?

Internet access was declared as a basic human right in 2016 by the United Nations.

However many people around the world struggle to get online due to a lack of infrastructure or extortionate costs.

Worldwide, 3.8 billion people remain without fast and reliable broadband service, according to the application.

Several companies have since launched endeavours to provide coverage around the world.

Amazon has launched Project Kuiper which it describes as ‘a long-term initiative to launch a constellation of Low Earth Orbit satellites that will provide low-latency, high-speed broadband connectivity to unserved and underserved communities around the world.’

The firm has recently filed an application with the FCC to launch more than 3.000 low Earth orbit satellite into space to help with the project.

The ROK GROUP will be launching a City Wide Wi-Fi network across 25 Indian cities.

The move comes in line with the Indian Government’s efforts to provide internet access to every Indian City.

Wide Wi-Fi Network will offer internet access across large portions of India and will be operated in association with BSNL.

It was founded with one purpose, to bring high-speed internet to India.

Elon Musk’s STARLINK project pioneers the use of low-orbit satellites to provide more efficient internet for the world.

SpaceX intends to start launching operational satellites as early as 2019, with the goal of reaching the full capacity of 4,425 satellites in 2024.

The Federal Communications Commission (FCC) have approved the plan, which just requires SpaceX to launch 50 per cent of the satellites by March 2024, and all of them by March 2027.

They are the first in a constellation of thousands of satellites, designed to provide low-cost broadband internet service from low Earth orbit.

FACEBOOK is working on plans for project ‘Simba’, named after the Lion King character, an underwater cable that will circle the continent with landings on multiple coasts.

Facebook is in talks to develop an underwater data cable that would encircle the continent, according to people familiar with the plans, an effort aimed at driving down its bandwidth costs and making it easier for the social media giant to sign up more users.

GOOGLE‘s underwater cable plans are much further along, as it has confirmed construction plans for a cable connecting Portugal and South Africa.

Google’s cable, named Equiano, will have 20 times the capacity of the most recent projects laid in the region and will first branch out in Nigeria—Africa’s largest internet market.