Vaccine hesitancy exists among some members of Nayana Bhandari’s community in Melbourne’s north. Sometimes, however, overcoming that motivational barrier feels like the easy part.

“Even if they are convinced, there are many practical hurdles. One of the first questions I get is: can I get it with my visa status? Which clinics can I go to? How do I register? Will it be AstraZeneca or Pfizer?” 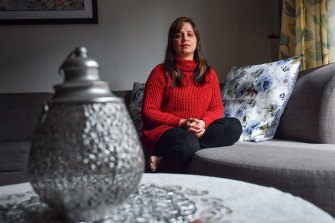 Her fellow migrants from India, particularly older ones, often read more news from their home country than locally, confusing them about whether they’re eligible for a jab and which ones are on offer.

“There are Whatsapp groups where all kinds of links and information get shared, especially from India, and a lot of it is just not right or applicable here,” she says.

Victoria’s three most multicultural areas remain the least vaccinated: the most-recent federal data showed about 40 per cent of Melbourne’s north-west, west and south-east had received one dose by Monday, compared to 57.9 per cent in Warrnambool and the state’s south-west.

Confusion and hesitancy are part of the explanation — families in those Melbourne areas are more likely to be younger with children and therefore ineligible for the recommended Pfizer vaccine. Access has started to improve only in the past fortnight with more vaccination clinics opening.

The confluence of those factors underscores the challenge for federal and state governments in reaching multicultural communities. As the country strives to reach 80 per cent fully vaccinated, there’s no room to leave anyone behind.

Ms Bhandari senses that while outbreaks and lockdowns in Victoria have whittled down hesitancy, community members like herself are filling in the many gaps around the edges of government messaging on both vaccines and lockdowns.

“We set up our own dedicated Whatsapp channels to counter those groups sharing false information. Instead, we spread as much official advice as possible,” she says.

“Every time restrictions happen or there’s changes with the vaccine, I take screenshots, share bits and pieces into the group, translate it into Hindi and Punjabi when I need to. Group members then add on with questions. It becomes like a community noticeboard: if you’re not sure, you can post your concerns and we try to help.”

Anam Javed’s day job is at a large secondary school in Melbourne’s north-east. Since June, the Muslim woman has led information sessions addressing questions about vaccines alongside trusted members of her community.

“A lot of concerns can be driven through a religious or cultural lens, like what is appropriate and what isn’t. There are also lots of questions about vaccines impacting fertility or breastfeeding — things women may not be comfortable asking on a larger platform,” says Ms Javed, who is of Pakistani origin.

“I run language-specific groups in Urdu and Hindi. Trust is the biggest word that led to this. I’m a Muslim, I wear a headscarf, I’m hopefully considered a trustworthy source of information.” 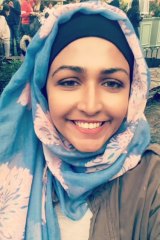 Anam Javed has been leading information sessions with the Muslim community.

Empowering respected figures has proven increasingly central to engaging their communities, including the likes of religious figures, doctors, elders and teachers.

NSW has increasingly leaned on them as cases boom in the multicultural western suburbs, while the Victorian government has engaged “vaccine champions” like Ms Javed.

She singles out two key drivers of vaccine hesitancy from her meetings: changing advice, particularly around the AstraZeneca vaccine, and the misalignment between the federal and state governments.

“That disconnect brings genuine fear. People question: do these people know what they’re doing? Are we listening to scientists or pushing certain political agendas? You can imagine how it impacts people who don’t have English as their first language or are new to the country.” 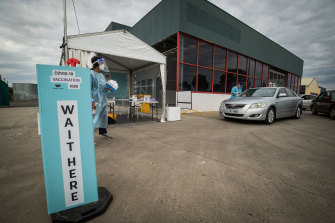 Victoria has started opening drive-through clinics in areas with lower vaccination rates, such as Melton in Melbourne’s west.Credit:Darrian Traynor

Those groups are also less likely to absorb government communications in their current form. University of Sydney research last month found the majority of public vaccination information from the federal, Victorian, NSW and Queensland governments was written at postgraduate level.

That makes it too difficult for those with an average reading ability — year 8 level — to understand. Even more so for the 9 million people in Australia who have lower health literacy.

Kirsten McCaffery, director of research at Sydney University’s School of Public Health, who co-authored the research, said the most blatant example of miscommunication was beamed onto TVs nationwide in July.

“The federal government’s ‘Arm Yourself’ campaign isn’t translatable. The ‘arm yourself’ metaphor simply doesn’t translate to different languages. For so many people, the ad means nothing more than seeing an arm with a Band-Aid on it,” Professor McCaffery says of the $41 million campaign. 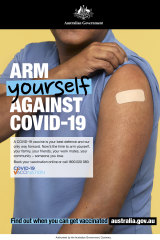 Professor McCaffery says the ‘Arm Yourself’ metaphor does not translate into most languages.

“You need a broad communications campaign that speaks to the whole community, on top of that best practice of empowering community leaders who instigate a two-way conversation on the ground in their local communities.”

A federal Health Department spokesman pointed to the Commonwealth’s $1.2 million June investment into $5000 grants for culturally and linguistically diverse community groups to share vaccination information. Online information is available in 63 languages and multimedia advertising has been translated into 32.

Dr Chris Lemoh, an infectious diseases physician based in Melbourne’s south-east, has been a trusted voice in information sessions with multicultural groups, in particular African communities, in recent months.

Members of different communities had unique and specific reasons for hesitancy towards vaccines, Dr Lemoh said.

For example, unsafe medications and vaccines have been historically trialled on African populations, engendering a mistrust of pharmaceutical companies and governments.

“Whenever you’re talking to people in a health promotion sense, you have to consider this is not a conversation happening in isolation. There is history and context beyond the immediate social or geographical scenario,” he said.

Stay across the most crucial developments related to the pandemic with the Coronavirus Update. Sign up for the weekly newsletter.