A former Miss South Africa has revealed that the friendship she had with her white counterpart was a facade ‘for the camera’.

Because of apartheid, Pearl was forced to compete in the contest as ‘Miss Africa South’ – alongside white contestant Jillian Jessup, Miss South Africa, and often would be photographed alongside the contestant and conduct interviews with her.

However, has now insisted that the pair would only ever communicate when there was a photo opportunity, and Pearl says they ‘never had that rapport’, because in the back of her mind she always thought of Jessup as someone who ‘oppressed her’. 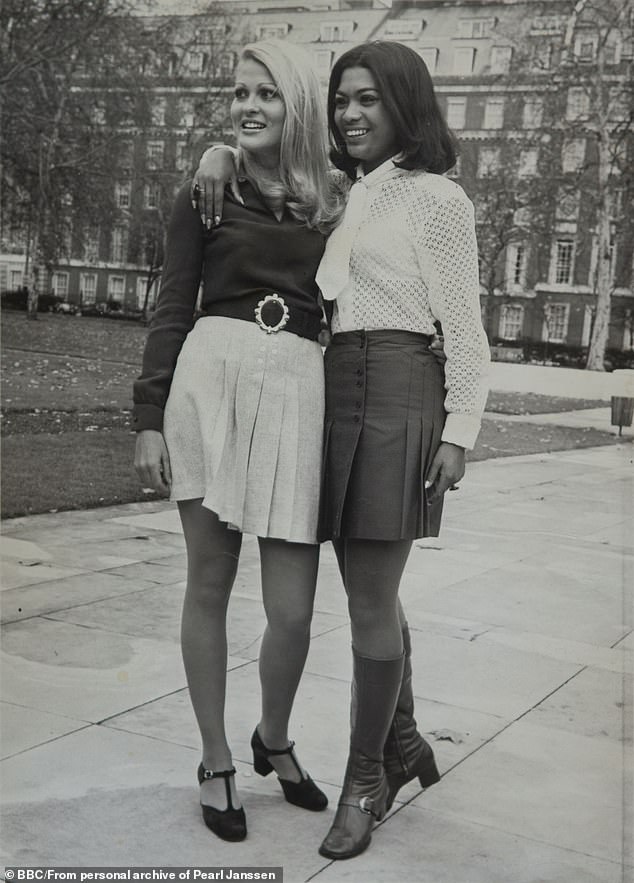 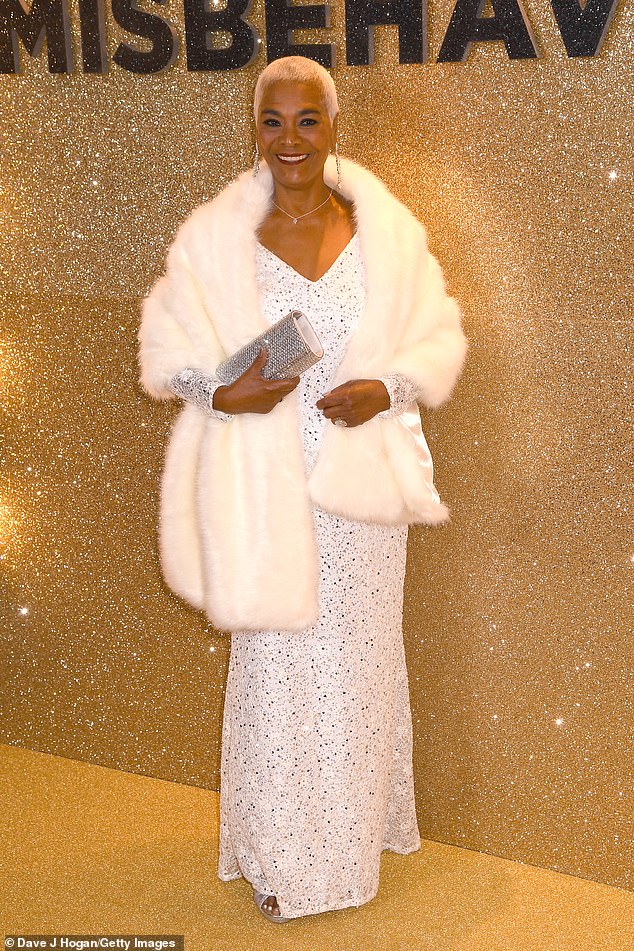 Pearl, now 68 has revealed that the friendship she had with her white counterpart was a facade ‘for the camera’ 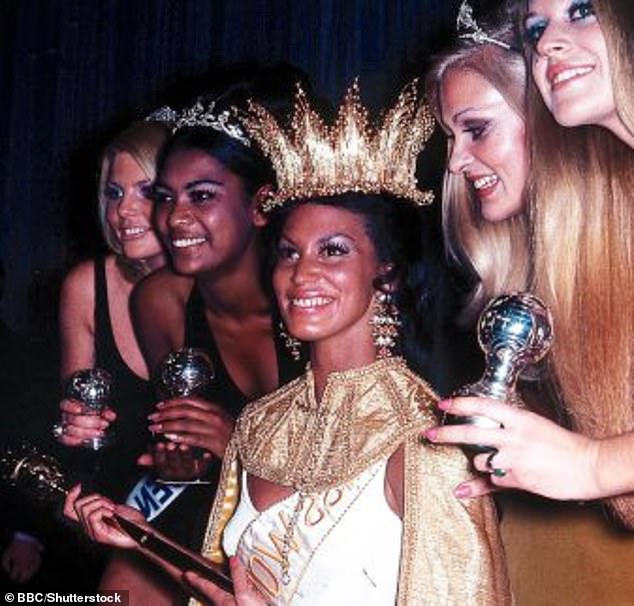 She said: ‘When I arrived for my interview I’d never seen so many cameras. It was the first time they had had two entrants from South Africa. They asked me questions about South Africa and I thought, “I have to be so diplomatic”.

‘The only time I saw Jillian was when we took photos together. I never communicated with her, I never had that rapport with her ever, because in the back of my mind was, “You’re white, you oppress me”.

That particular Miss World final — the 20th in the pageant’s history — was the highest-rated British TV programme of the year and watched by more than 22 million people on BBC1.

The Women’s Liberation movement launched infamous protest at the Miss World final on that November night in 1970. It was the signal for her fellow demonstrators to leap into action.

Now, almost 50 years later, the full story is to be told in a new film, Misbehaviour, starring Keira Knightley. 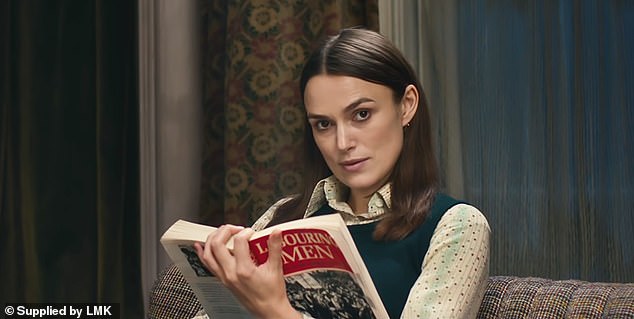 Women’s Liberation movement launched infamous protest at the Miss World final on that November night in 1970. Pictured, Knightley in ‘Misbehaviour’

The first event was sparked when Bob Hope took the microphone and began by acknowledging the protests outside.

‘It is quite a cattle market here tonight,’ he said. ‘And I’ve been back there checking calves. But I don’t want you to think that I’m a dirty old man because I never give women a second thought. My first thought covers everything.’

The protest died out, but when Bob Hope announced the winner, there was more trouble. The 7-1 favourite was Miss Sweden, so there was booing when it was announced that Jennifer Hosten, 23, an air hostess from the Caribbean island of Grenada, had become the first black Miss World.

Since the judging panel included Eric Gairy, Grenada’s prime minister, there were claims that the result had been fixed. 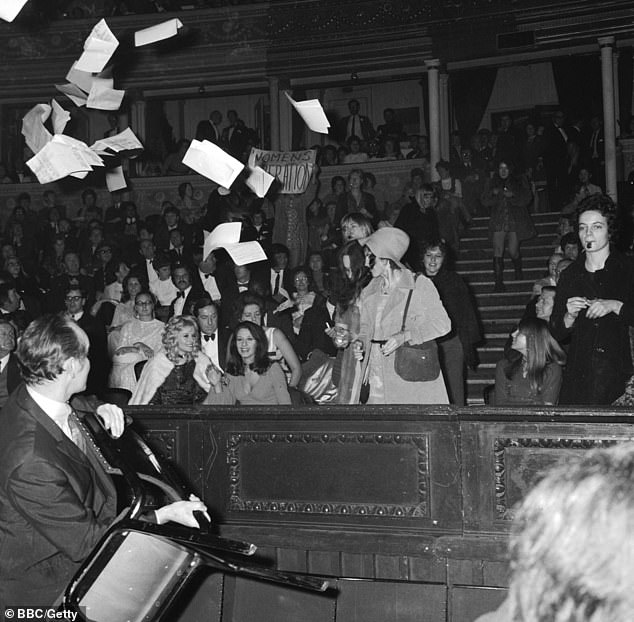 The protests continued when the contestants departed the Albert Hall in a coach bound for the Coronation Ball at the Cafe de Paris nightclub.

However, Pearl told of the mania that awaited her upon her return to South Africa, and insisted she had given ‘hope’ to those who had been marginalized in troubled times.

She said: ‘It’s the first time that a black girl was crowned Miss World. So what a milestone – for the both of us.

‘From the airport there was a Cadillac waiting for me. People were standing on streets on balconies, it was just excitement.

‘They took me to the Cape Town City Hall. When I got back to our township, I thought my mother roof was going to smash in, the people were sitting on our roof top. What I had given was hope.’ The winner of the Miss World 1970 beauty pageant, Jennifer Hosten of Greneda wears her crown and sits on the winnner’s throne at the Royal Albert Hall in London on November 20, 1970. Runners up pictured from left to right are: Miss Israel Irith Lavi in third place, Miss South Africa Jillian Jessup in fifth place, Miss Africa South Pearl Jansen in second place and Miss Sweden Marjorie Christel Johansson in fourth place

She became the first ever woman from Africa to win the Miss World title.

She said: ‘With the apartheid we were uprooted, in the middle of nowhere my mum was a domestic worker and she worked for a white family. To me as a kid that was normal, I was a happy child.

When quizzed on her work opportunities, she said: ‘Nothing, there was nothing to look forward to because most of the jobs were for whites.

‘I ended up working in a shoe factory. I was going through a magazine, the very first Miss World in South Africa in 1958. I said I want to be like Penelope Coelen and my brothers they said “Miss World, you want to be Miss World”. I said, “You watch me”.

She later added: ‘People say do you realise you made history, to me it feels like it’s a dream it’s not part of my life, things didn’t pan out the way I anticipated but were were not in a good space.

‘A lot of things are strange for people of colour, especially female. You can’t tell this generation, but if I had those opportunities I wouldn’t encourage my daughter to enter pageants. I think I connect more now with women, with feminism too.’

Related posts:
March 17, 2020 Lifestyle Comments Off on Miss South Africa says friendship with white counterpart was sham
Celebrity News:
Regina King, Josh Gad & More Honor James Earl Jones on 90th Birthday
Lady Gaga Planning To Add Her Own ‘Flair’ To Inauguration National Anthem: She’s ‘Honored’ To Perform
Becca Kufrin Can't Get Enough of This Guy From Season 16 of 'The Bachelorette'
Kamala Harris’ Socks Are Taking The Internet By Storm
Emmerdale’s Joe-Warren Plant has awkward tumble with skating partner Vanessa on first Dancing On Ice show
Recent Posts
This website uses cookies to improve your user experience and to provide you with advertisements that are relevant to your interests. By continuing to browse the site you are agreeing to our use of cookies.Ok