Like thousands of others thrust into a health crisis by Australia's most common women's cancer, breast cancer, Kirsty Sword Gusmao was not ready to be told that she had it.

The former "first lady" of East Timor was visiting Myanmar when she discovered an abnormality in 2013; she returned to Melbourne for Christmas, had a mammogram and found her stay extended to seven months' treatment at Peter MacCallum Cancer Centre. 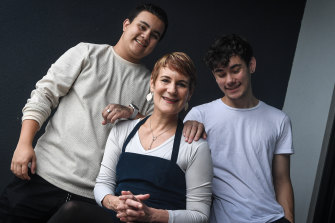 Kirsty Sword Gusmao at home in Melbourne with her sons Daniel, left, and Alexandre.Credit:Justin McManus

Despite having lived through plenty of challenges, famously including being a resistance "spy" during the brutal Indonesian regime (and later shielding her children with East Timor's first democratically elected president Xanana Gusmao from gunmen circling the family home), it is breast cancer that Sword Gusmao describes as "a horrific journey, both emotionally and physically".

"During the worst of the chemotherapy you're just very weak and lacking in energy; at that time I had three very energetic young boys [then aged 13, 11 and nine] and we were living with my mother on the Mornington Peninsula by necessity, I had nowhere else to live at that time," says Sword Gusmao, who moved home to Melbourne permanently in 2014.

Her mother, Rosalie, a former teacher, cared for the family, and a roster of friends helped with school drop-offs and other activities for the boys, Alexandre, Kay Olok, and Daniel.

"I was pretty unable to cope with very much other than just staying at home," she says.

Once the ordeal was over and she was given the all-clear, Sword Gusmao says "my eyes were opened" to the fact that, had she been an East Timorese woman, her experience would probably have been far worse.

"It only struck me when I returned to Timor and started running workshops with women in the community just how many women had perished as a result of breast cancer, and in most cases had never been diagnosed and really did nothing more than suspect they possibly had a form of cancer," she says.

The nation has no government-run breast cancer education, no mammograms, chemotherapy or radiotherapy. Most women who develop it are not diagnosed until the disease is well advanced and the mortality rate is 80 per cent (compared with 10 per cent in developed nations).

"Most women who do present to the health services are already in stage four, which is very advanced disease, because they haven't been diagnosed and particularly in rural areas they rely very heavily on traditional medicine," she says.

"By the time they realise that's not working and they present to a hospital, it's too often way too late."

Sword Gusmao says terrible wounds can develop as a result.

"I've seen the most stomach-churning photographs from a surgeon at Dili National Hospital. It's really distressing."

Having established Alola, a foundation to raise awareness of gender-based violence experienced by Timorese women – "the single most reported crime" – in 2001, Sword Gusmao founded Haliku, a cancer support and education group in 2014. Volunteers distribute information about cancer detection and prevention and support the transport of patients to hospitals from rural areas, among other services.

In six years, Haliku, now working in tandem with the Timorese health department, has run workshops for 37,000 people at East Timorese universities, in the public service, the clergy, police and defence forces and has provided financial assistance for biopsies. It has also helped women get to diagnostic services and delivered medication such as Tomoxifen. Among those referred by the group for diagnosis and earlier treatment there is a reduced mortality rate.

"The biggest challenge we face is education about symptoms of breast cancer and the importance of early detection through breast self-examination," Sword Gusmao says. "Education is really vital. And then helping in very practical ways, so women can get to see the medical professionals they need."

Alola now has one paid staff member, and Sword Gusmao is working with Christine Nolan, former chief executive of Breast Cancer Network Australia, to raise funds in Australia for more training of health workers, including a scholarship for one to be trained in social work and counselling.

"I found the breast cancer nurses at Peter Mac were such a support to me," Sword Gusmao says. "Helping women deal with the emotional pain of their journey is really important."