A mother whose prison sentence for killing three of her children was slashed will be re-sentenced after a High Court victory for prosecutors.

Akon Guode was jailed for 26½ years in 2017 after intentionally driving her car into a lake in Wyndham Vale, killing her four-year-old twins Hangar and Madit and 16-month-old son Bol on April 8, 2015. 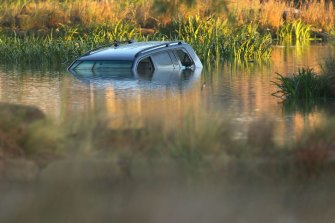 Guode had survived rape and her soldier husband's death in war-torn Sudan before coming to Australia as a refugee.

Infanticide carries a shorter maximum prison sentence and takes into account that "the balance of [Guode's] mind was disturbed" because of the birth of a child two years before.

The High Court ruled the Court of Appeal made an error in considering her plea of guilty to that charge, and her relevant mental state, when sentencing her for the murder and attempted murder charges. 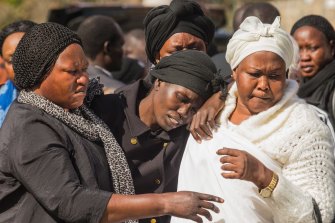 Akon Guode at her children’s funeral in April 2015.Credit:Chris Hopkins

Guode was affected by a depressive disorder at the time of the killings.

She probably had the same mental state in relation to killing Bol as to her other children, three judges found.

But the factors they had to consider around her mental condition were different for the murder and attempted murder charges than for infanticide.