The real-life murder trial that inspired The Conjuring: The Devil Made Me Do It: As viewers say they’re ‘traumatised’ by the horror, FEMAIL reveals the chilling true story behind it – including ‘double demonic possession’ and Catholic exorcism gone wrong

So far it’s left viewers ‘traumatised’ and unable to sleep – but The Conjuring: The Devil Made Me Do It’s story is even more sinister when you realise it’s based on a true murder trial.

The third part of the successful horror franchise sees the return of American actors Patrick Wilson and Vera Farmiga as real-life paranormal investigators Ed and Lorraine Warren as they explore one of their most infamous cases.

Released on Friday and hailed by fans as a ‘masterpiece’, the new film follows the story of Arne Cheyenne Johnson, the first American to plead not guilty to a homicide by reason of ‘demonic possession’.

On February 16, 1981, Johnson stabbed his landlord, Alan Bono, more than 20 times with a  five-inch pocketknife in Connecticut.

His murder trial, dubbed the ‘Devil made me do it’, became a national sensation at a time when pop culture included a fascination with the supernatural; a Gallup Poll from 1979 reported that 34 per cent of US adults believed in the devil, The Telegraph  reported. 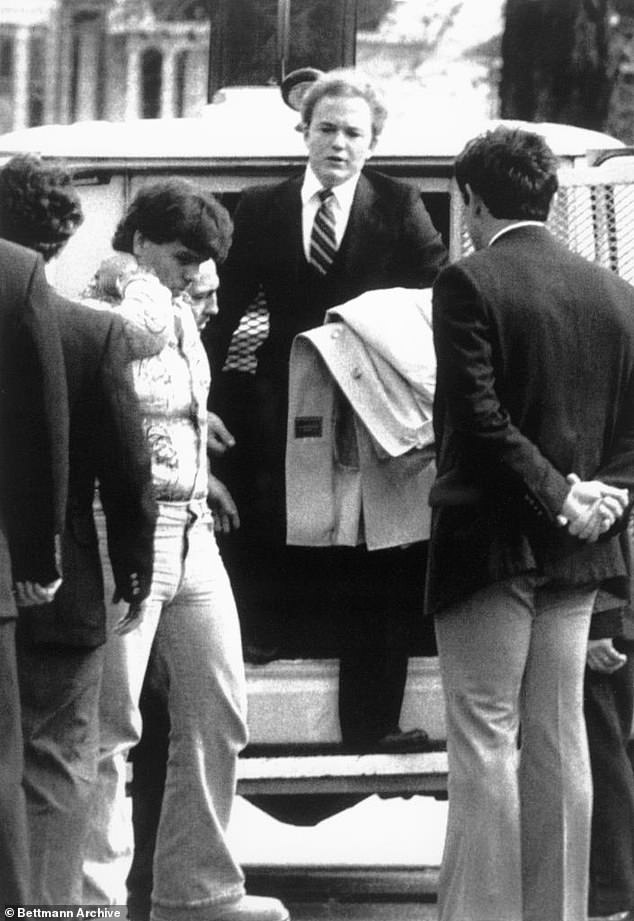 The new film follows the story of Arne Cheyenne Johnson (pictured centre, with his coat over his arm as he steps from a police van on arrival at court), the first American to plead not guilty to a homicide by reason of ‘demonic possession’ 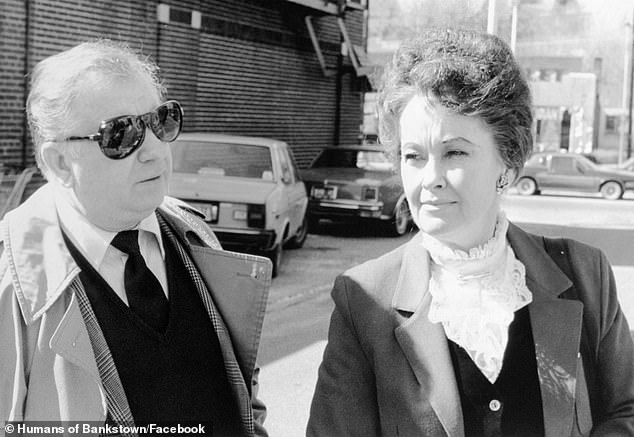 According to the Warrens, Satan turned up in the killer’s small town of Brookfield – which had marked 193 years without a murder – months before the actual killing took place.

The paranormal investigators were called to assist David Glatzel, the 11-year-old brother of 19-year-old Johnson’s girlfriend Deborah when in the summer of 1979, the young boy’s family became convinced he was being possessed.

David first complained of visions of old men sporting animal features and horns, threatening the family and vowing to relieve the young boy of his soul.

For the next few months, his erratic behaviour only increased, with his mother Judy previously telling the New York Times: ‘He would kick, bite, spit, swear – terrible words.’

The youngster would randomly recite passages from the Bible, appear to shake from head to toe and be covered in scratches or bruises that couldn’t be accounted for.

His family longed for a solution – allegedly asking priests from a local church to examine David, although a spokesman for the group later denied that any ‘formal exorcism was asked for or performed’ on the child. The family contested this. 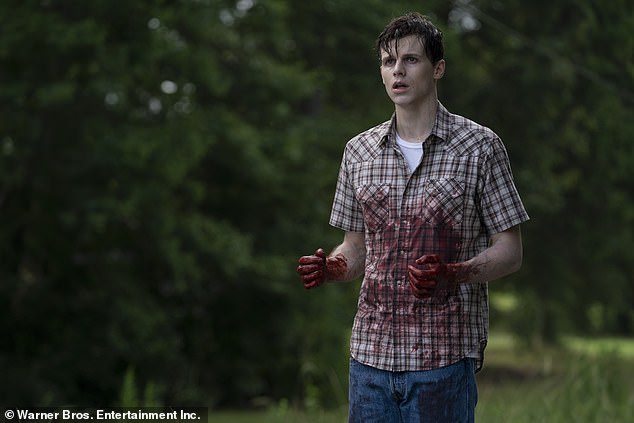 On February 16, 1981, Johnson stabbed his landlord, Alan Bono, more than 20 times with a five-inch pocketknife in Connecticut. Pictured, a scene from the film 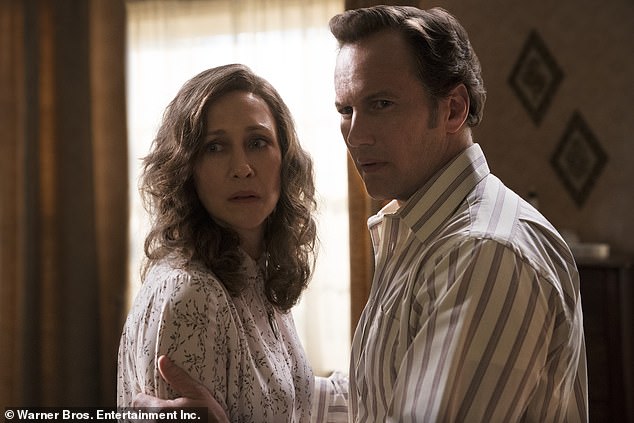 According to the Warrens (pictured being portrayed in the film), Satan turned up in the killer’s small town of Brookfield – which had marked 193 years without a murder – months before the actual killing took place

David’s mother Judy told The Washington Post she paid $75 an hour for a session with a local psychiatrist, only to be told that her son was ‘normal’ with a ‘minimal learning disability’.

Ed and Lorraine were also consulted to rid the family’s home of the ‘devil’s’ influence – claiming to record ’43 demons in the boy’ following their investigation.

Speaking to People magazine in 1981, Lorraine said: ‘While Ed interviewed the boy, I saw a black, misty form next to him, which told me we were dealing with something of a negative nature.

‘Soon the child was complaining that invisible hands were choking him—and there were red marks on him. He said that he had the feeling of being hit.’

In the end, none of the attempts to change David’s odd behaviour were successful and soon Johnson took matters into his own hands, claiming to have called on the devil to leave David and enter him instead.

Ed Warren said Johnson ‘taunted’ the devil, leading to his fate. The 19-year-old tree surgeon first showed signs of being possessed when he drove his tree into a car, according to the Glatzels. 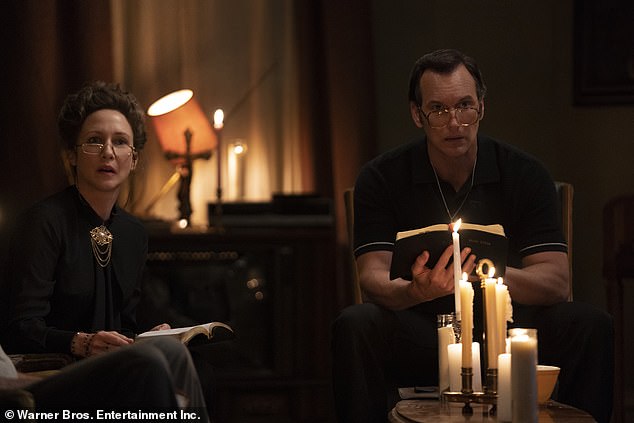 The paranormal investigators (pictured being played in the film) were called to assist David Glatzel, the 11-year-old brother of 19-year-old Johnson’s girlfriend Deborah when in the summer of 1979, the young boy’s family became convinced he was being possessed

He came out of the incident unscathed, but his behaviour grew stranger, with friends and family saying he’d enter a trance and growl or hallucinate.

As his condition worsened, Deborah and Johnson moved out of her family home and she was hired by their landlord Alan Bono as a dog groomer.

Then on February 16, 1981, Johnson called in sick to work and joined Deborah at the kennel where she worked along with her nine-year-old cousin Mary and his sister Wanda.

For lunch, they went to a local bar with Bono and drank heavily before Deborah took the girls for pizza while Johnson remained behind.

Upon their return, they found an agitated and drunk Bono who grabbed Mary and refused to let her go.

According to Wanda, via The Mirror, her brother ordered his landlord to release the youngster and, as she ran for the car, Johnson growled ‘like an animal’, drew out his five-inch knife, and repeatedly stabbed Bono.

Johnson’s lawyer Martin Minnella said Bono suffered ‘four or five tremendous wounds’, mostly to his chest, as well as one that stretched from his stomach to the bottom of his heart. 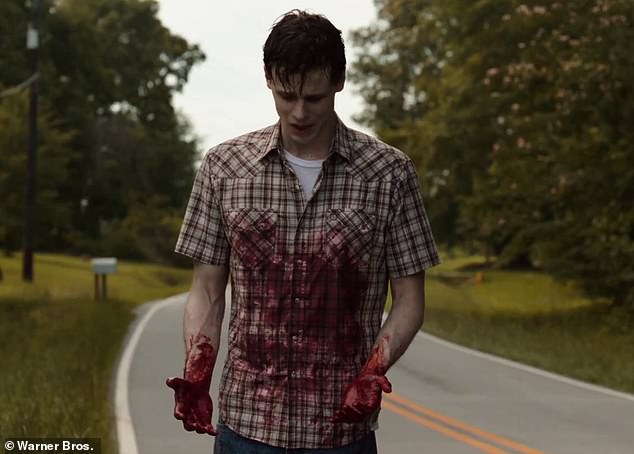 Johnson’s murder trial, dubbed the ‘Devil made me do it’, became a national media frenzy. Pictured, a scene from the film 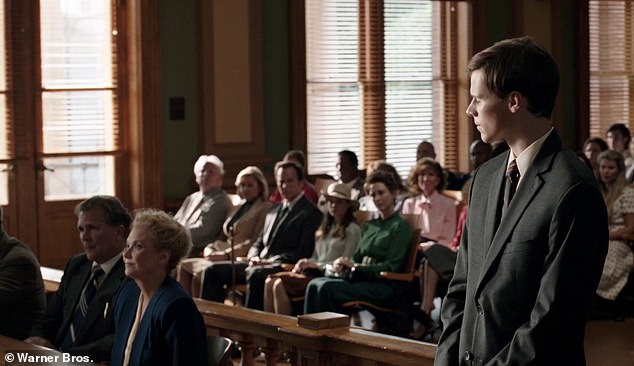 Chilling: Demonic possession becomes the defence’s explanation for a chain of events (pictured, in the film)

The day after the murder, Lorraine Warren told police that Johnson was possessed when the crime was committed, sparking a media frenzy around the case.

However, when the trial began, presiding judge, Robert Callahan, rejected Johnson’s defence, insisting it would be ‘irrelative and unscientific’ to allow testimony for something that could never be proven

He instructed the jury not to consider it as a reason for the crime, and after 15 hours of deliberation across three days, it convicted Johnson of first-degree manslaughter on November 24, 1981.

Johnson served almost five years of a 10-to-20-year sentence, having been released early because of his good behaviour. While behind bars, he married Deborah, and got his high-school diploma.

Lorraine Warren later collaborated on a book about the case with Gerald Brittle called The Devil in Connecticut.

But when it was republished in 2006, David and his brother Carl sued the authors and publishers for violating their privacy, libel and ‘intentional infliction of emotional distress.’

In The Conjuring: The Devil Made Me Do It Farmiga and Wilson star alongside an exceptional cast including Ruairi O’Connor, Sarah Catherine Hook, and Julian Hilliard.

Wan, who directed the first two films in the leading global horror franchise, returns as a producer with Peter Safran.

Related posts:
May 31, 2021 Lifestyle Comments Off on Murder trial that inspired The Conjuring: The Devil Made Me Do It
Celebrity News:
The Best Portable Chairs for Music Festivals and Outdoor Concerts
Gov. Cuomo Doubles Down in Denial of Inappropriate Touching
Courtney Love Apologizes After Accusing Trent Reznor of Abusing ‘Girls as Young as 12’
Who Is Carly Lawrence From Too Hot To Handle?
‘Dull as Prince William’ John Cleese aims jibe at royals as he bemoans Euro 2020 matches
Recent Posts