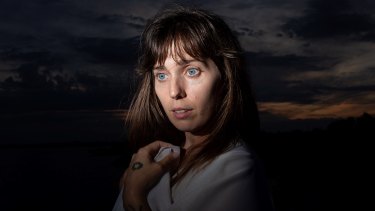 Early on in Heavy Light, on spoken-word collage Advice to Teenage Self, a voice says: “Everyone says life is short, life is long, there’s lots of room to be many different ways.” It's good advice, but it’s also a pretty good encapsulation of Meghan Remy’s US Girls, an ever-evolving project that has seen the Toronto-based musician reassemble the history of American music to craft her own strange, subversive and novelesque songs. Heavy Light is the follow-up to her ambitious breakthrough album In a Poem Unlimited, which melded bright jukebox pop with seething stories of male power, submission and revenge. Heavy Light finds Remy’s political commentary more radical than ever, but this time looking inward, offering a sobering and sometimes dark-humoured portrayal of survival and work. While dipping into disco and soul, the album largely contains stomping, twisted piano numbers that place Remy’s compelling vocals (which toggle between Kylie Minogue sweetness and PJ Harvey theatrics) at their centre. Working with 20 session musicians, including E Street Band saxophonist Jake Clemons, the album also contains plenty of orchestral moments and swelling choruses that both uplift and haunt. ISABELLA TRIMBOLI

A bottle of French bubbles is dirt cheap compared with an airfare to Paris, so buy two, plus the best baguette and camembert you can find, and then play this. Voila! Paris! Despite spanning many decades and variants of Parisian music, this album never breaks its own spell. The great Charles Trenet eulogises about Douce France in a voice like satin, and Lucienne Delyle drizzles her dulcet come-to-bed timbre over C'est Magnifique. Francis Lemarque's warm, grainy singing brings to life his own Un Gamin de Paris, and Raphael Bas offers an instrumental waltz in the manouche style, his keening harmonica sharing the lighter-than-air soloing with clarinet and his own guitar. Singer/accordionist Norbert Slama sustains the waltz feel on Sous Les Ponts de Paris, and of course La Mer is here, played by Gypsy Jazz Caravan. Duo Gadjo, featuring the sweet-voiced Isabelle Fontaine, floats across La Complainte de la Butte, and a highlight is accordionist Odile Lavault leading Baguette Quartette on the rippling melody of Flambee Montalbanaise. Finally Francesca Blanchard and Giorgis offer modern twists, without imperilling that spell. The only frustrations are the album's brevity, and that recording dates aren't provided. JOHN SHAND

For the past decade, the New Jersey band Real Estate has delivered a dreamy blend of bright guitars soaked in reverb, overlaid with wistful contemplations of modern life. The Main Thing treads the same ground, but gently introduces a few new concepts. The lead single Paper Cup is Real Estate’s first foray into collaboration: Sylvan Esso’s Amelia Meath lends a welcome edge to the synth-drenched, disco-inspired tune, while the instrumental sections of the spacey opener Friday wouldn’t sound entirely out of place on an Air record. The addition of a string quartet lends a rustic quality to the sound, and wordless tracks, like the closer Brother, build a self-contained universe in just minutes. All the signature elements of a classic Real Estate album are here: lush, heaped vocals, steady, addictive bass-lines, and Martin Courtney’s plainly honest, storytelling voice. As has often been the case across the band’s catalogue, the tracks often bleed into each other and sound like one long song – and while this is perhaps repetitive on the surface, for the careful listener it offers a reliability with secrets to reveal, as long as one pays close enough attention. GISELLE AU-NHIEN NGUYEN

Turns out that you can unplug the former leader of Pavement and he still won’t play it straight. Stephen Malkmus became the patron saint of smart slacker rock in the ’90s with wiry, frazzled songs that were stylistically oblique, while casting enigmatic shapes and long shadows. With his post-Pavement band the Jicks and as a solo artist, he’s followed his many muses – jam bands, prog-rock, electronics – and as the title suggests, Traditional Techniques finds him going acoustic. It’s more genre exercise than soulful excursion, opening with twangy strings and fluttering flute playing a trippy eastern-tinged drone. And then he sings: “Thunderbolts, the great known, knights of kindle crow, shower me in gold dust in the myrtle dissolve.” The jumpy-voiced Malkmus was never about linear narrative, and he certainly isn’t starting now. With six-string maverick Matt Sweeney (Chavez, Zwan) in tow, he mashes up The Byrds and the Velvet Underground on Xian Man and namechecks Reddit, TED talks and “cracked emojis” on Shadowbanned. The syncopated but stately Flowin’ Robes and the off-kilter lament Amberjack are more cogent, heartfelt moments, and they’re better for it, proving that dropping the smirk can actually work. BARRY DIVOLA