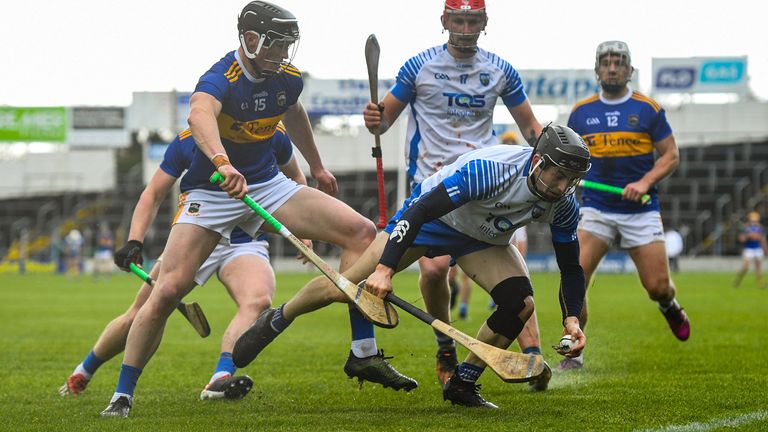 A round-up of Sunday’s National Hurling League action, as Tipperary, Galway and Clare all picked up wins.

There were three red cards during the first half of Waterford’s visit to Semple Stadium, with Austin Gleeson and Kevin Moran sent off for the Déise, and Cathal Barrett dismissed for the Premier.

However, despite a two-point lead and numerical advantage at the break, Tipp struggled to kill the Waterford challenge. The visitors stayed in touch throughout the second half, with a Stephen Bennett goal keeping them in the tie. However, Jason Forde’s accuracy from frees, and 0-5 from debutant Dillon Quirke eventually helped Tipp over the line, 0-24 to 2-16.

Meanwhile, Galway rallied after a second-half fightback from Cork to storm to a 2-18 to 1-16 victory in Salthill. Shane O’Neill’s side pulled clear thanks to a Brian Concannon goal in the second half, as they picked up their second win of the campaign. The result means the Rebels cannot progress to the knockout stages.

Elsewhere in Group A, Limerick ran out 1-24 to 0-18 winners over Westmeath. In Group B, Clare overcame Dublin 0-27 to 1-15 in Ennis. The sides were level at half-time, with Eamonn Dillon scoring the Sky Blues’ goal, but the Banner pulled clear after the break. The victory sends Brian Lohan’s side through to the Division 1 semi-final.

Elsewhere, there were comfortable wins for Wexford and Kilkenny. The Model County defeated Carlow, 2-29 to 1-11, while the Cats saw off Laois 3-22 to 1-19.

Offaly kept their promotion hopes alive with a comprehensive 4-29 to 2-14 win over Wicklow.

This one outstanding game between the Faithful County and the Saffrons will decide the decider line-up, with Darren Gleeson’s charges virtually guaranteed a final spot.