A new scheme to bring more foreign farm labourers into the country is underway, with the federal government signing an agreement to open negotiations with Vietnam for an agricultural visa.

The controversial ag visa has been a long-standing commitment by the Nationals, and topped the wishlist of the National Farmers Federation for the past four years, including claims there is a shortage of 10,000 workers under a UK trade deal. 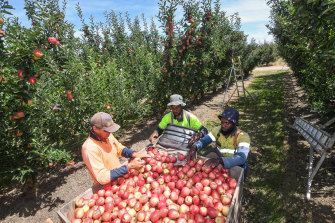 The federal government has signed a bilateral agreement with Vietnam to start negotiations on agriculture visa to bring foreign farm workers to Australia. Credit:Justin McManus

Details for the Vietnam agreement have not been finalised, leaving an open question over how many workers will be permitted under the scheme, and how long they can work in the country.

The junior Coalition party had been unable to secure support from the Liberals, which hold the Foreign Affairs portfolio, due in part to concerns the new scheme for South East Asian nations would undermine Pacific worker schemes. Those schemes bring in about 12,000 workers a year and generate a significant economic contribution to the region.

Vietnam is the first country to sign a memorandum of understanding with Australia for an ag visa. Details of the scheme are yet to be finalised, but the Department of Foreign Affairs and Trade said it would start with a “small initial cohort” of workers.

“We are bound by warm ties of friendship and family that extend across every level of community, government and business. This step reflects what is possible when we work together,” Senator Payne.

Agriculture Minister David Littleproud said his party fought hard for the visa and the achievement created a test of the opposition’s rural policy.

“The Nationals never gave up and pushed our Coalition partners to finalise the visa,” Minister Littleproud said.

“While this is one of the biggest achievements of the Nationals this term, the question still remains as to whether a Labor government would keep it.”

Labor agriculture spokeswoman Julie Collins last year said the ag visa would not address workforce shortages. She said on Monday the Vietnam announcement was “just more bluster” and argued that Mr Littleproud had thrown Senator Payne “under the bus” with his remarks .

“The Morrison-Joyce government should come clean on the details of the MoU (memorandum of understanding) and when workers are expected on farms,” Ms Collins said.

This masthead reported last week that a company approved by the federal government to bring workers to Australia under the ag visa had been suspended from an earlier program due to its poor record on labour exploitation.

Farm groups have called for the ag visa to be significantly different to the Seasonal Workers Program for Pacific nations, which is designed as foreign aid measure and requires farmers to contribute to workers’ travel costs, accommodation and guaranteed work. It is used mainly by agribusinesses with large operations for longer-term work.

Farmers have said the new visa must be more flexible to serve small farm businesses that can only offer short periods of work when harvests roll across the country.

Australian Workers Union national secretary Daniel Walton said in February the ag visa should be shelved because exploitation was rife in the horticulture sector, which would be the major employer of ag visa workers, arguing the government must do more to protect workers and encourage Australians to work in the sector.

“Since 2016, 11 different pieces of research have investigated exploitation of horticulture workers… and they have all come back with the same findings: underpayment, mistreatment, shocking conditions and exploitation are systemic,” Mr Walton said.

“This is not just a few bad eggs… Three-quarters of these breaches involved underpayment.”