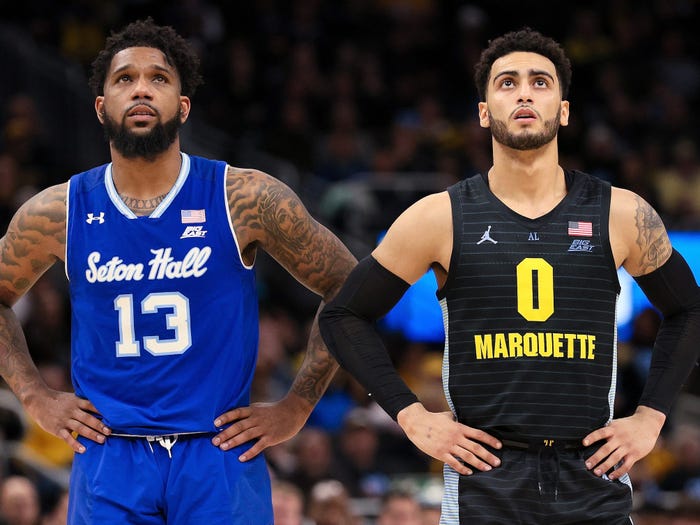 NBA teams had the opportunity to pick up the most promising young talents in basketball with Wednesday night's NBA draft.

But as teams began to gamble on little-known prospects and junior college risks, two of college basketball's best and brightest saw the rounds tick by with their names still lingering on the board.

Myles Powell and Markus Howard — both consensus first-team All-Americans last season — went undrafted Wednesday night despite dominating the Big East conference and the rest of the NCAA throughout their illustrious four-year careers. College basketball fans ranged from perplexed to outraged that NBA teams would pass over the duo — who combined for more than 5,000 career points — despite their proven talent on the hardwood.

Powell averaged 17.5 points, 2.3 assists, and 1.3 steals per game over his standout four-year career with the Seton Hall Pirates, and he only improved with time. During his senior season, the gritty 6-foot-2 guard led the Pirates back to national prominence — and to the team's first top-10 ranking in 20 years — en route to earning Big East Player of the Year honors and the Jerry West Award.

Howard, meanwhile, was widely regarded as one of the best shooters in college basketball throughout his time with the Marquette Golden Eagles. In his worst shooting season wearing blue and gold, the 5-foot-11 point guard still shot 42% from the floor and 40.3% from beyond the arc; in his best, Howard shot 50.6% from the field and 54.7% from range.

The New Jersey native regularly lit up the scoreboard thanks to his crafty ball handling and impressive range. Howard surpassed the 40-point mark seven times in his career and thrice surpassed 50 points in a single game. By the first game of his senior season, he had already secured his spot in the Marquette history books as the program's all-time leading scorer. Three months later, he'd become the all-time leading scorer in the entire Big East conference, and he'd finish the 2019-2020 season as the NCAA's top scorer after racking up 27.8 points per game.

After the draft, Howard agreed to a two-way contract with the Denver Nuggets according to The Athletic's Shams Charania. The deal will presumably relegate the 21 year old to the G League for the majority of next season.

Powell, meanwhile, intends to sign with the New York Knicks as an undrafted free agent, per SNY's Ian Begley. The Knicks are considered Powell's hometown team, as the shooting guard is a Trenton, New Jersey, native and became a collegiate superstar just across the river from Manhattan in Newark, New Jersey.

It remains unclear whether NBA teams' apparent lack of interest in the prolific duo stemmed from an overreliance on metrics or the lack of buzz ordinarily generated from March Madness. But either way, college basketball fans are confident pro teams whiffed by skipping out on two of the best players the Big East has ever seen.