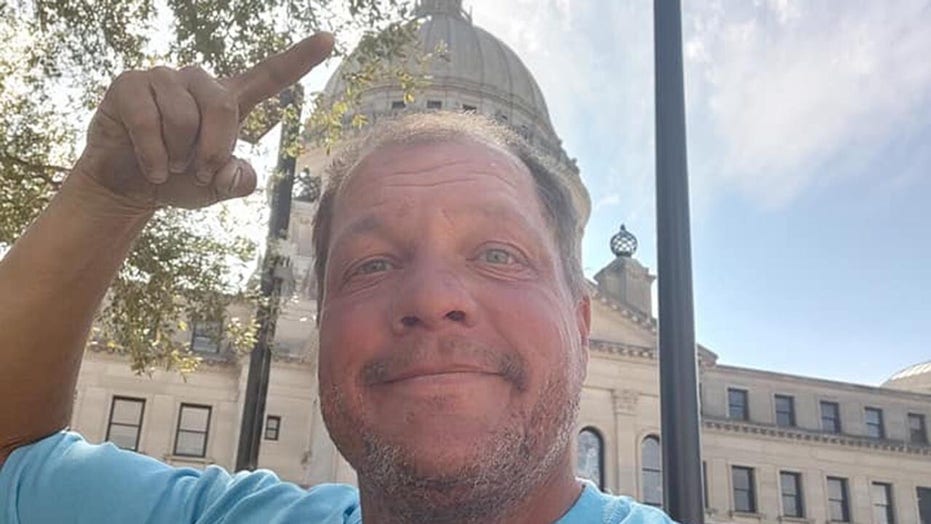 A man from Syracuse, New York, who is cycling to all 50 U.S. state capitals in one year has finally found his favorite state so far.

Along his unusual (and very long!) journey across America, Bob Barnes, 52, has been sharing his adventures with Fox News Digital — including the fact that he really loves the state of Mississippi.

Barnes arrived in Jackson — the 29th capital for him in his biking journey — on March 3. And after riding across his now-favorite state, Barnes reflected on what made Mississippi stand out for him.

‘They make you feel at home’

Barnes told Fox News Digital that Mississippi is his favorite state so far because of its “Southern hospitality.” 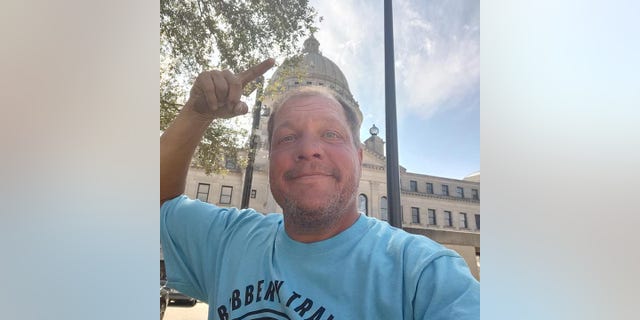 Bob Barnes arrived at his 29th state capital, Jackson, Mississippi, on March 3, 2022, amid his year-long travels across the United States. He said that in Mississippi, people are so "welcoming."
(Bob Barnes) 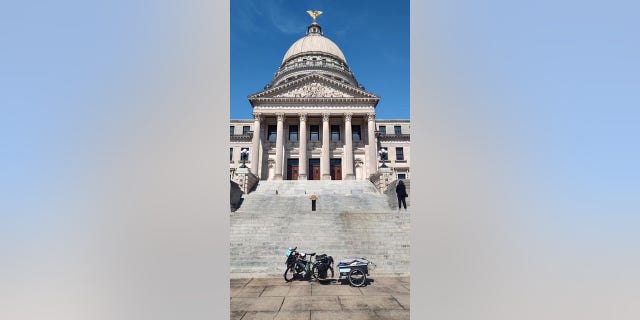 Barnes took this photo of the Statehouse in Jackson, Mississippi. He also revealed why Mississippi is his favorite state so far. All the images shown in this article were taken by Barnes and shared with Fox News Digital.
(Bob Barnes)

He added, “Everybody [is] welcoming. And it’s an incredible feeling. You just feel at home.”

“Mississippi is the most hospitable state that I’ve ever been in,” Barnes added. “Nice and mellow and homey.”

Barnes said one of his best experiences of that Southern hospitality was when two of his “Bibbery Travels” Facebook followers offered to let him stay in their bungalow for the night.

“They just welcomed me with open arms,” Barnes said. “I had a kitchen, a bedroom, a living room, a porch for the whole night.”

The next morning, the couple, Andy and Dottie, even made breakfast for Barnes before he hit the road again.

The kindness didn’t stop there, though. Barnes said that practically everywhere he went, people were hospitable.

“Mississippi is the most hospitable state that I’ve ever been in.”

“Even going into the convenience stores, it’s an experience because people are just so nice,” said the man from New York. “And again, they make you feel at home.”

While the people of Mississippi were treating Barnes to their Southern hospitality, Barnes paid it forward to someone else.

As he was cycling one day, he found a wallet on the road. The address on the license was a few miles back — so instead of turning around, Barnes went to the nearest post office and mailed the wallet to the owner. 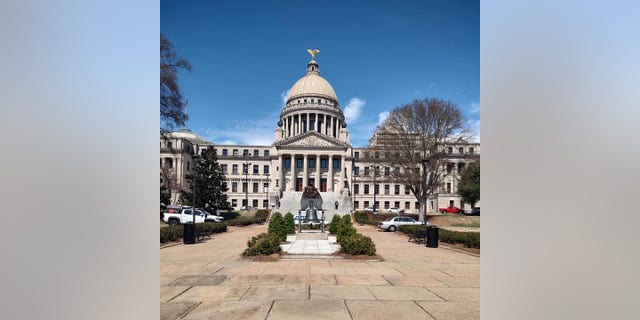 Barnes was supposed to meet with a Mississippi state senator, who was going to introduce him on the state Senate floor.
(Bob Barnes)

Barnes said he wanted to make sure to return the wallet to its owner because earlier on in his trip, he lost his own license — and “had to go through so much trouble to get that license back.”

“How easy would it be, if somebody found it, to have mailed it to me,” Barnes said. “So that’s what I did for him. And he had it the next day and sent me a response, so that was nice.”

Though Barnes loved the people and the hospitality in Mississippi, the roads and highways, he said, weren’t so easy to embrace.

“Mississippi is my favorite state, but ironically, it was the most challenging state overall to get through,” Barnes said. He said the hardest part was the fact that there weren’t many shoulders on the roads and highways for him to cycle on safely. 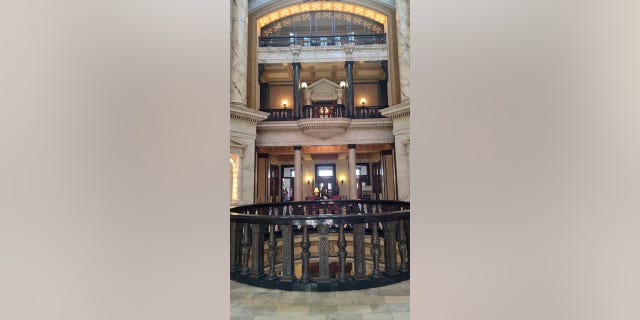 Barnes didn’t get to be introduced on the Mississippi Senate floor because travel was so difficult. But he did get to go inside the Statehouse.
(Bob Barnes)

“It’s just very difficult,” Barnes said. “I don’t hold it against them, it’s just a fact that it was very challenging to get through.”

Another challenge for him as a cyclist was the terrain.

“Mississippi is extremely hilly,” Barnes said. “The entire state. Everywhere was a hill.”

“The key is to just be patient.”

“It just makes it more difficult, because you can’t see the cars coming over the hill from in front of you and behind you,” he added.

Barnes said he was never worried about his safety, though. Whenever things became concerning for him, he just stopped cycling and got off the road. 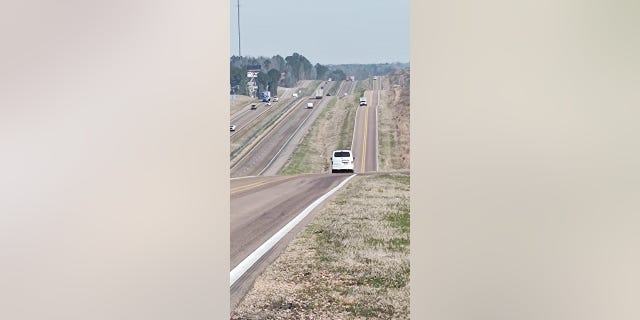 Mississippi was one of the hardest states for Barnes to cycle through because of all the hills — and the lack of a shoulder on the side of the road.
(Bob Barnes)

At one point, Barnes had to stop for the night very early on — around 3 p.m. — because traffic was so bad and there was no shoulder to ride on. 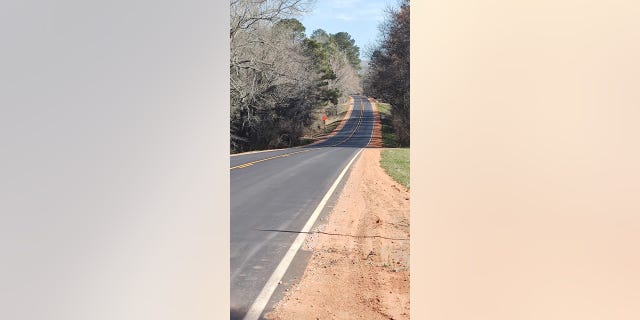 Barnes said he had to get off his bike frequently to be safe. The dirt, he said (as shown in this image), would be bad to cycle on.
(Bob Barnes)

“There was no reason to go any further,” Barnes said. “Just wait until the morning and set back out again.”

Though Barnes was able to relax and avoid frustration, he said it was still “tough” for hium to have to stop so early. “That’s never happened, where traffic’s actually stopped me like that,” he said.

Cycling late into the night

For Bob Barnes’ visit to the Mississippi capital, the “Bibbery Travelers” follower who let Barnes stay in his bungalow tried to connect Barnes to a Mississippi state senator he knew. 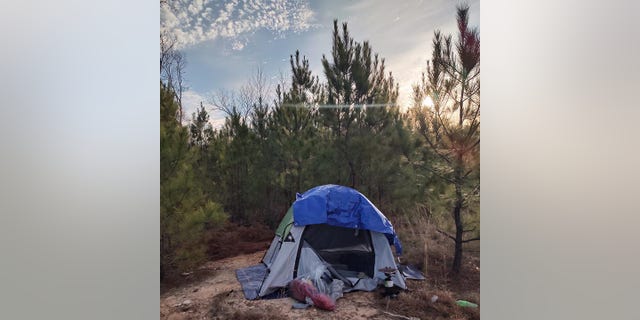 The lawmaker was supposed to introduced Barnes on the Senate floor, “which would have been awesome,” Barnes said.

However, because of the difficult cycling conditions, it took Barnes longer than expected to reach Jackson.

Barnes tried to make up time by cycling from midnight to 3 a.m. one night, but that, too, became hazardous.

“Mississippi is my favorite state, but ironically, it was the most challenging state overall to get through.”

“I couldn’t do it,” Barnes said. “It got unsafe just because I was tired, and I had to stop.”

Barnes said the late-night ride was also lonely — which isn’t an issue for him when he cycles during the day.

“It was dark, you’re by yourself, you’re in the middle of a state you’ve never been in and it’s just a different experience,” Barnes said.

“That was the latest I’ve ever traveled,” he added. “I’ve traveled into the dusk, you know, and then stopped. But that’s the first time I ever did that.”

By the time Barnes made it to Jackson, the Mississippi senator had already left, so Barnes didn’t get to be introduced on the floor as he’d hoped.

After he made it to Jackson, Barnes had his usual celebratory beer (which he’s been doing in each state) — and this time, he enjoyed a sit-down lunch of “delicious” fish and chips. 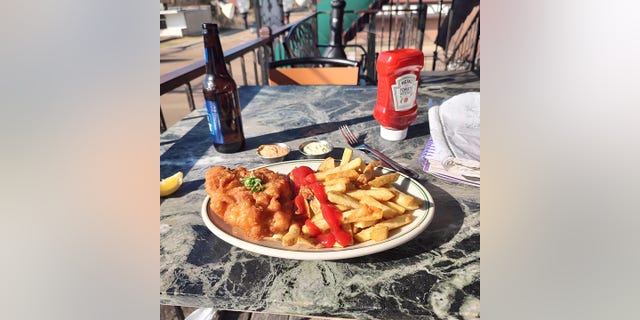 Along with his traditional celebratory beer, Barnes also enjoyed some "delicious" fish and chips in Jackson, Mississippi.
(Bob Barnes)

“I don’t eat like that very often,” Barnes said.

A few days later, Barnes’ “Bibbery Travels” followers made him breakfast, which included grits, a Southern dish Barnes had never had before.

“It was great,” Barnes said. “You taste more butter than anything, which is good.” 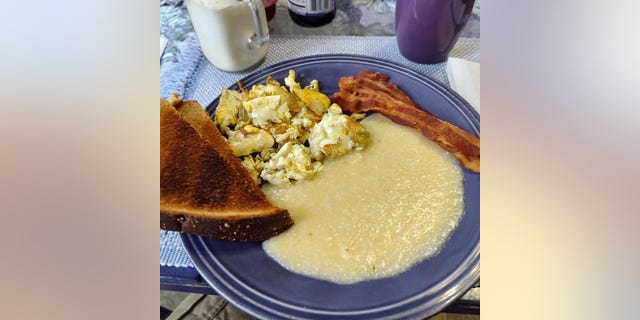 After he stayed with one of his Facebook followers, Barnes enjoyed a classic Southern dish: grits.
(Bob Barnes)

Barnes also said there were snow cone carts everywhere, so he enjoyed one despite the brain freeze.

Though Barnes told Fox News Digital earlier he’s more of a big-city person, he admitted that after cycling through much of rural Mississippi, he’d consider moving to the state.

“I certainly wouldn’t say no at this point,” Barnes said.

For more of his adventures — stay tuned!